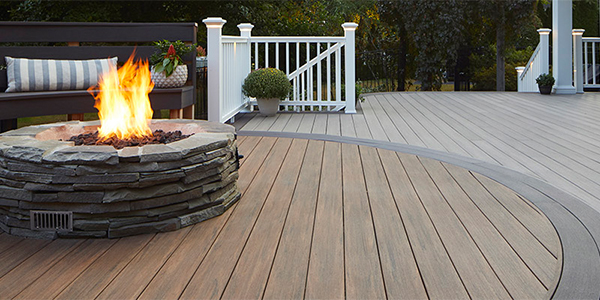 Home and garden experts continue to promote new and varied uses for our living spaces; the latest phenomenon is the outdoor room. With that in mind, the people at USA Deck, a 100-percent owned subsidiary of U.S. Home systems (NASDAQ: USHS) pose the following question: What would a room be like without a floor?

At USA Deck, the question has many answers, because not only does the company construct state-of-the-art decks but it also builds railings and stairs and a host of accessories, including planters, to bring more livable square footage into a homeowner’s backyard.

It is a business borne out of the late 1970s housing construction boom that gave rise to the popularity of decks. Company founder Daniel Betts was a young entrepreneur in the construction field and started his deck business in 1979 after someone asked why people weren’t prefabricating decks in the same way they were building pre-fab housing. “I got my first break with Sears and by 1989 I had 11 deck factories around the country for Sears,” Betts recalls, adding that his vertically integrated company was involved with all of the marketing, sales, manufacturing and installation.

Betts sold his company to pursue other ventures, but bought it back when he found that its new owners were in hot water with the SEC; the concern then was consolidated into three different strategic locations serving Home Depot. Now the company manufactures, markets and installs for 200 Home Depot stores that fan out from the Washington, D.C. metro market, the Norfolk to Baltimore corridor and Philadelphia, which services Pennsylvania, Delaware and New Jersey. With plans to open a factory in Boston, USA Deck currently operates two factories, one in Woodbridge, Va., and the second in Glen Mills, Pa., each measuring 20,000 square feet.

All decked out
Explains Betts, the construction of decks traditionally had been the purview of do-it-yourselfers, years before the term was popularly coined. However, in the current home-remodeling climate, these former – or would-be DIYers are now more inclined to let the professionals take over. People have realized, Betts points out, that there’s more to deck installation than what Bob Villa shows on his TV segments.

“Out of 100 decks done this year, 75 percent began as do-it-yourself intended, and in the end it turns out to be 50/50; 25 percent of the market swings to professional installation,” Betts explains. This is due to a range of reasons, from time constraints to improper planning.

USA Deck promotes its operation through an in-store display that shows an attractive deck at an affordable price that includes deck, railing and stairs; the company even offers a monthly payment plan. “That’s why we’ve been so successful,” he adds. “By advertising the installation price we knock people off the fence.” Offering 12 different designs, USA Deck’s prices range from $4,900 to $8,000.

What makes the job even easier is that 90 percent of the deck system is manufactured before it leaves the building. Once on site the job becomes an assembly process; a homeowner can leave in the morning and return to have dinner on the deck.

Hit the deck
As the 2000 gold award winner of the National Remodeling Quality Award for quality achievement, USA Deck has turned many heads with its patented Designer Deck(r) platform system. Here are some of the significant advances USA Deck has made in the construction of decks:

To further punctuate its advancement in deck design, all of USA Deck’s products have received certification from the International Code Council, the national building code administrator.

A deck in every yard
USA Decks installed 3,000 decks in 2003, which not only makes the company number one in its class but also makes it number one through six. “There’s no one close to us,” Betts says.

And wanting to further widen its lead, the company is focusing on a far-reaching expansion plan over the next three years, anticipating more growth through Home Depot.

“Most people say our product is different from our competitors but that’s one factor that serves as the hub as to why we’re successful; to get the whole picture you need to look at the rest of the spokes. We have marketing discipline, and more than 55 full-time salespeople and we’re vertically integrated to the point at which we even have a treatment facility for wood. And we don’t use subcontractors; we have our own employees and a fleet of trucks,” he notes.

Now an industry that has skyrocketed into the $170 billion dollar range, according to a recent Harvard University study, the deck industry is beginning to gain attention from key groups as a major component of the nationwide construction industry, and as Betts attests, “Even Wall Street is beginning to take notice.”

The consumer, however, is not driven by studies or university research; the drive to install a deck is precipitated by an emotional need to improve on a living environment. As Betts explains, “It provides additional square footage they didn’t have before, it’s level, it’s clean, and provides a way to enjoy the outdoors. You find that people enjoy quality time with friends and family on a deck.”

From a logical standpoint, he adds, “a deck is a great investment. It will help the house to appreciate in value.”