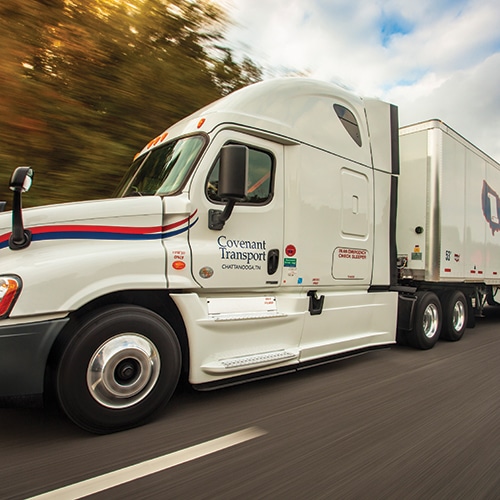 Getting ahead of customer requirements is the driving force behind Sigma Industries’ dimension of value that has pushed the Canadian-based company to the forefront of the truck components and bus industries. Located in Quebec, Sigma Industries is a consolidator of plastic composite and metal manufacturers that services the transportation, machinery, agriculture, light forestry and alternative energy markets.
The company acquired several composite and metal products manufacturers and employs a market focused product development approach that encompasses the best practices from the six operating subsidiaries within its umbrella. The laterally constructed product development approach is what William Stanton, marketing manager, says differentiates the company from its competitors.

“We offer a complete market driven industrial design package for our customers that our competitors are hard pressed to duplicate,” he said. “When you acquire companies you get their systems and processes and can incorporate those best practices into your own systems.”

Stanton says the market focused product development approach allows Sigma Industries to not only anticipate emerging industry trends but design products to customer specifications. A good case in point is Sigma Industries’ dedication to developing a new concept in body shell technology for urban transit buses – both city and over the road – that is targeted at the emerging hybrid electric drive market developing in the transit industry.

The company has been working on a hybrid design since 2005. Hybrid electric drives are being rapidly deployed in the larger transit markets like New York MTA, King County metro in Seattle to name a few. Hybrid vehicles are coming into vogue in an effort to reduce operating costs and transit’s 12 million metric ton annual contribution to green house gases. According to Stanton, improvements in fuel technology and reductions in emissions of internal combustion engines have topped out and the only way to further improve the engine efficiencies is by developing alternate drives that exploit the synergies of alternate fuels and electrical energy.

Transit has been at the forefront of hybrid drive technology, but the promise of improved efficiency has not materialized in the field mostly due to duty cycle and the mass of the vehicle. Most transit vehicles are older vehicles and putting 21st century drive technology into 20th century vehicle bodies has been ineffectual.

The transit vehicles are heavy, prone to corrosion, and have high inertial resistance. In addition, the transit agencies look for a 15- to 18-year life in the vehicles to maximize their return on investment and the high-priced hybrid drives and metal bodies have not been up to the demand, especially in the rust belt.

ENTER SIGMA’S HYBRID COMPOSITE BUS BODY
Throughout the past few years there have been other attempts at body shell weight reduction using composite technology but those companies vested in delivering the vehicles cancelled the production of these buses. Tapping what Stanton calls the company’s “hidden resources” Sigma Industries designed an alternative technology called Hybrid Composite Bus Body. This body type skirted the fatigue issues often associated with all-composite vehicle bodies, and was more in keeping with transit equipment manufacturers’ shift from manufacturing to assembly.

As Stanton puts it, Sigma Industries coupled the emerging transit trends with its customers’ requirements to deliver the market focused product development model. He also revealed the company’s “hidden resources” was nothing more than the experience of many Sigma Industries engineers or “a lot of gray hairs in our various divisions.”

The Hybrid Composite Bus Body exploits the fatigue resistance of metals and the high strength-to-weight ratio of composites. Stanton explains the guiding philosophy is to try not to solve every problem with composites. Sigma’s patented Hybrid Composite Bus Body technology is 20 percent lighter than conventional bodies coming in 8,547 pounds lighter than traditional vehicles. Further, Sigma Industries’ internal studies show it is actually superior in strength and durability.

The body is constructed of structural modules that are bonded together. Hybrid Composite Bus Body bodies are not restricted in length by the size of the mold – in fact, Sigma Industries intends to sell bus body kits by the foot to suit variable market requirements. Moreover, the bus body fundamentally changes the way in which bus bodies are built, dovetailing with the original equipment manufacturer’s desire to eliminate basic manufacturing and simplify assembly.

Sigma Industries can customize the body to match the original equipment manufacturer’s market requirements for style, length, and interior finishes. Finally, Hybrid Composite Bus Body technology is green to satisfy the environmentally minded. The components are formed in closed-molds, limiting emissions and the bodies are shipped knocked down to save freight. In addition, the bodies are comprised of bio-resins utilizing Dow’s RenuvaTM polyol technology and can be disassembled for end-of-life disposal. The Hybrid Composite Bus Body also last longer than traditional vehicles meaning a larger transit agency deploying a fleet of 235 hybrid drive vehicles can save $1.49 million/month in fuel costs, and 73,230 metric tons in green house gases.

PUTTING IT ALL TOGETHER
Sigma Industries is a publicly-listed company; its shares trade on the TSX Venture Exchange under ticker symbol SIC. For the fiscal year ended April 30, 2007, Sigma generated revenues of more than Cdn$83 million (US$84 million). It has six operating subsidiaries and employs close to 525 people. Sigma sells its products to original equipment manufacturers and distributors in the United States, Canada and Europe. Sigma has had a recent history of steady growth and accretive acquisitions. Its recent and planned growth initiatives are expected to continue to raise Sigma’s profile within its sectors of activity.

The company is focused on maintaining the same customer experience throughout all subsidiaries and divisions. Sigma Industries’ mission is to grow the business by developing new products and acquiring companies with complementary products in order to maximize its market share. The company’s primary markets are served by a solid group of distributors that are concentrated in the Northeast of Canada and the United States.

Sigma Industries’ product lines and services range from manufacturing the products to offering consultancy services to its clients. Stanton says the company offers a complete market driven design package that means its customers benefit from the same organization taking a product from the concept styling phase all the way to manufacturing it.

Other Sigma Industries groups include an international supplier of quality composite components and assemblies serving original equipment manufacturers in the agricultural, truck, consumer and military industry sectors. Operating out of plants located in Canada and the United States the group provides timely delivery and reliable performance through a 24/7 operation cycle and leverages its adaptive business culture and knowledge in the field of thermosetting plastics to create total solutions for its clientele.

Another division is a reliable source of spare parts for agricultural machinery or snow removal equipment. This group is based on customer service with a personal approach to help build the customer base. The company’s view is every customer is different and important and with its solid distribution network, Sigma Industries is able to provide quick service and on-time deliveries.

For each customer, the company can draw on the experiences of each of the groups to offer a better customer experience. Sigma Industries also develops high-quality technologies and materials by striving for products with superior performance. It also adopted a continuous improvement process associated with tight quality control to make custom products guaranteed against all defects.

With the overriding principle of market focused product development Sigma Industries has earned a spot at the forefront of the industry.