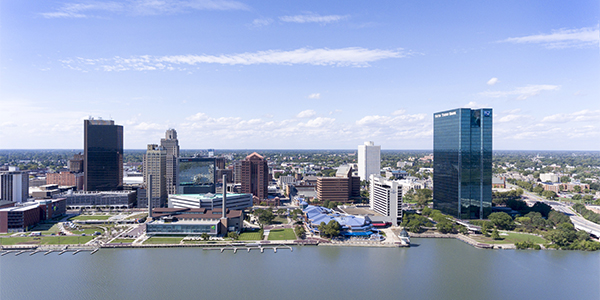 Manufacturing has been significant for the Toledo economy for a variety of reasons: The city’s location at Ohio’s Northwest corner, on Lake Erie, has allowed it to grow rapidly in the area of intermodal shipping. And this became vital a century ago, with the increase in agricultural activities, especially the transporting of grain, which precipitated entrance by some crafty entrepreneurs into the packaging and food processing sectors.

Its next coup was to recruit the glass industry out of New England, because of its proximity to markets and its array of natural resources that allowed the manufacture of a vast array of glass products. Its claim to fame in this arena involves renowned innovator Michael Owens, who invented the automated glass bottle-blowing machine, which sped up the manufacture of glass bottles, which previously were made by hand. “It allowed for mass production and the ability to process and package food on a large scale,” relates Lee Springer, director of internal business development for The Regional Growth Partnership, which facilitates economic activities in Toledo and the surrounding area. Today, four glass companies are headquartered in Toledo: Owens Illinois, which just finished its new headquarters; Libby Glass, whose largest plant is in Toledo; Pilkington, which became Nippon sheet glass, and Owens Corning. Among the advances coming out of this region are innovations in photovoltaic glass as well as in plasma screens.

The impact of industry on the Toledo economy has precipitated stellar growth. Founded in 1837, Toledo, in the ensuing 169 years, has been on the cutting edge of glass innovation, food packaging, processing and transportation. Having a birds-eye view of Lake Erie has helped the city immensely in terms of intermodal transport but its real distinction is in the number of leading companies that call it home.

Its economic efforts are spearheaded by The Regional Growth Partnership, a public/private nonprofit development corporation dedicated to fostering local, national and international economic growth opportunities for businesses in Toledo and Northwest Ohio. Northwest Ohio companies and entrepreneurs are constantly being recognized for state-of-the-art technology development.

One of the benefits of citing a business in Toledo involves its proximity to major transportation arteries and these include major railroads CSX and Norfolk Southern that transport bulk cargo out of Lake Erie, in addition to interstates 80 and 90, which bring Toledo within 250 miles of both Pittsburgh and Chicago. Another transportation asset is heavy freight carrier BAX Global, based at Toledo Express Airport

“We have a fully intermodal transportation system with North America and Canada markets,” adds Eileen Granata, the RGP’s vice president for strategic resources.

Automotive expansion
Among its most recent important developments was the announcement by DaimlerChrysler Jeep of a $535 million capital investment to expand its Toledo Jeep facility and create an onsite supplier park. The supplier park will include three new companies which, combined with DaimlerChrysler, will employ 3,800 workers.

The Regional Growth Partnership helped facilitate the project by working in conjunction with the City of Toledo, the Toledo-Lucas County Port Authority, local school districts and the State of Ohio.

The suppliers will own and operate three of the four factories, including the body welding shop, the paint shop and chassis assembly line. They will invest approximately $260 million for the building, machinery and equipment and tooling. DaimlerChrysler will invest $275 million to accommodate the expansion for products associated with the body, paint and chassis shops.

The project was recognized as a model for collaboration and partnership between the various governmental entities, as well as the working relationship between DaimlerChrysler’s management and labor.

Upon completion, investment in the Toledo project will be approximately $900 million, bringing the total investment in new vehicle design and tooling to more than $2 billion. In addition, the new assembly operation is expected to result in new suppliers locating near the facility to provide just-in-time components and parts. Production for the new vehicles is expected to begin in 2006.

General Motors has also put in a $600 million investment in a power train plant. “All four plants here are recognized, Granata says, adding, “The GM transmission plant is number one in North America. Johnson Controls was also recognized as top plant among that company’s facilities.”

The Regional Growth Partnership played a leading role in facilitating Dana Corporation’s $50 million investment for a brand new, state-of-the-art technology center in Maumee. The project brought close to 300 new high-paying jobs to the region, and meant the retention of 175 similar-type jobs.

The Lucas County site was chosen ahead of two other sites from outside Ohio. The 183,000-square-foot facility now serves as division headquarters for the company’s light axle, driveshaft and systems integration operations.

General Motors has also put in a $600 million investment in a power train plant. “All four plants here are recognized, Granata says, adding, “The GM transmission plant is number one in North America. Johnson Controls was also recognized as top plant among that company’s facilities.”

Vital economy
Such activity has made Toledo the destination of choice for businesspeople. And what they see may surprise them. “People generally think of smokestacks when they think of Toledo,” Springer says.

But with an abundance of natural resources, beaches and various recreational activities and a variety of arts and entertainment venues, Toledo is hardly a smokestack town. In fact, the county in which it resides, Lucas, is ranked near the top in the Great Lakes region when it comes to future capital investment, according to Industrial Info Resources, an information service company providing comprehensive market intelligence.

IIR ranked Lucas County seventh among all counties in six Great Lakes states with 17 scheduled projects worth more than $1.5 billion. “This shows that Lucas County is successfully competing in the Midwest,” said Scott Libbe, executive vice president at Rudolph-Libbe and a board member for the Regional Growth Partnership, at the time the report was published. “Business and construction have been strong regionally and it appears this trend is continuing.”

And this should keep Toledo strong in the economic development arena for years to come.

For more information contact the Regional Growth Partnership at 800-815-6744 or visit: www.rpg.org