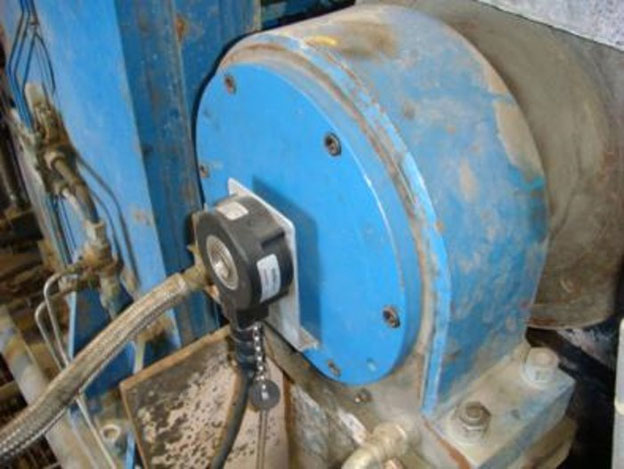 When specifying a rotary encoder, it is essential to consider how the application environment will impact performance and lifetime. It’s easy to focus on resolution and output but overlooking the physical environment can prove to be a devastating mistake. The encoder won’t provide the level of accuracy and resolution required for the application. Even if it does, conditions may compromise lifetime and lead to early failure. When specifying an encoder, take into account these circumstances, then look for devices specifically designed to address them.

In an optical encoder, a code disk, often made of glass, plastic or metal, passes between an LED and a photodetector (see figure 2). The disc modulates the beam to generate either a pulse stream that can be processed to yield speed, direction and/or position, or a multi-bit digital word corresponding to absolute position. For optical encoders, excessive temperatures and moisture can impact performance, mechanical properties, and lifetime.

Magnetic encoders operate on a similar principle, but use wheels patterned with magnetic pole pairs and magnetic sensors to detect motion. Magnetic encoders provide a more robust option to optical encoders and are resilient to moisture, dirt, grease and other contaminants.

For the most extreme conditions, resolvers provide a rugged alternative. A resolver is a special type of rotary transformer that converts voltage changes to position information. Resolvers do not require onboard electronics, making them able to withstand extreme temperatures, contamination, radiation, and shock and vibration without damage.

Effects of Temperature on Encoder Performance

Temperature swings can cause problems with device alignment and clearances. In optical encoders, the air gap between the disk and the source/detector can be as narrow as 0.020”. Depending on the temperature, the size of the gap, the coefficients of thermal expansion (CTEs) of the materials, and the orientation, this expansion could bring the components in contact with one another, causing damage or even catastrophic failure.

Low temperatures such as those found in mining, oil and gas, and off-road applications can distort the code disk of an optical encoder, affecting signal quality and potentially introducing anomalies. Lubricants harden at low temperatures, preventing even distribution around bearings at startup. This can cause friction between the rolling elements and the bearing races. Over time, this can lead to damage and premature failure.

The solution is to look for optical encoders that are designed for conditions of the application. Rotary encoders with wider air gaps, for example, carry higher temperature ratings. At the other extreme, the use of low-temperature greases can help maintain bearing lubrication even in frigid conditions.

Temperature extremes also affect magnetic encoders, although to a lesser extent. Expansion and contraction of the magnetic wheel can alter the pitch of the magnetic poles, compromising the accuracy of the readings. Air gaps are less of an issue. Typically, modern magnetic encoders a have wide air gaps (up to 0.070”) and any variation caused due to thermal expansion or contraction are within the tolerance range of workable airgap.

Past a certain point, temperatures will demagnetize magnetic domains. For applications such as steel processing, a resolver may be a better choice.

In terms of false readouts, moisture and salt buildup on the code disc and optical components can attenuate the optical signal, in some cases preventing a count from being registered. Particulates can partially or fully block the holes in the code disc, leading to false counts.

These conditions also can cause catastrophic failure. If the contamination penetrates the seals of the motor or encoder bearing, it can degrade the lubricant and/or the bearing elements themselves. The result can be catastrophic bearing failure, which can generate particulates that further damage the code disc. Moisture and contamination can also cause electronics to fail.

It is critical to select an optical encoder with an appropriate ingress protection (IP) rating for the application. Make sure the seal material mode to grade in the environment. Look for encapsulated electronics. Depending on the resolution and performance requirements, a magnetic encoder may be a better solution. Magnetic encoders are not impaired by moisture. They can operate in humid environments and even totally immersed (see figure 3).

The effects of shock and vibration

Optical encoders are most vulnerable to shock and vibration. Vibration can show up in the signal as excess noise, manifesting as jitter. This type of jitter appears on all channels. For applications with very high shock and vibration, an optical phased-array sensor can provide better performance (see figure 4). These solid-state devices average at the signal to reduce the effect of vibration.

In the extreme, high vibration or shock loads can cause either source or detector to impact the disc, causing damage or even catastrophic failure. Encoders with wider air gaps are rated for higher shock loads, providing high resolution and accuracy performance in a resilient feedback device.

An optical phased-array sensor may be a better choice. Alternatively, magnetic encoders sensor engines are insensitive to shock and vibration. These devices have larger air gaps, which helps prevent damage. The trade-off is limited resolution, however.

In addition, there are basic issues such as cabling that vibrates loose. In some cases, prolonged vibration can damage the solder joints on the PCBs and even damage wires due to fatigue. Vibration can alter the loading of a bearing, causing uneven wear that can lead to premature failure. Bearingless magnetic encoders are better solutions in heavy vibration environments.

Like all things in engineering, choosing an encoder for rugged environments involves trade-offs. The points above give general guidelines. Specialized applications such as those requiring very high resolution for harsh environments will push these technologies to their limits.

To specify long lasting solutions, OEMs should work closely with encoder manufacturers to evaluate feedback solutions based on the specific environmental requirements. Collaboration is key and will result in a solution that can satisfy the needs of the application in most cases.

Cory Mahn, Territory Manager, Dynapar Corporation
Cory is a seasoned engineer and sales professional starting as an application engineer and holding various engineering and commercial roles of increasing responsibility over his 20 year career at Dynapar. As senior product engineer he developed multiple OEM solutions and oversaw the launch one of the first high resolution industrial absolute encoder manufacturing cells in the US and currently is the territory manager for US west. Cory holds a Bachelor of Engineering from the Milwaukee School of Engineering.