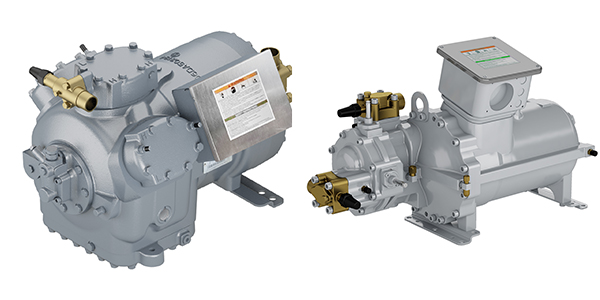 You may never have heard of it, but Carlyle Compressors has an illustrious history almost as long and as revolutionary as that of the air conditioner itself. Indeed, the company’s history is hinted at by the name “Carlyle,” which is actually a compound derived from two legendary names in the development of air conditioning: Dr. Willis H. Carrier, the founder of the parent company whose work with the early cooling device dated all the way back to 1902, and his business partner, J. Irvine Lyle Rather than rest on its tradition and laurels, the 80-year-old, New York-based company has been looking to the future with new lines of compressors to meet demands for better energy efficiency and for improved emissions.

For example, Carlyle, which is based in Syracuse, N.Y., recently introduced a new line of screw compressors called the Paragon, which aims to take advantage of the movement toward rotary operation to offer better efficiency in the mid-range for devices from 40 to 250 tons.

“This is a unique, state-of-the-art system,” said Steve Holden, the business strategy manager for Carlyle Compressors, who noted that the Paragon model has particularly taken hold among units for larger buildings that are increasingly relying on so-called “chillers” that pump massive amounts of chilled water to cool a building.

Spanning the globe
It’s quite a long way from when Carlyle and Carrier Corp. were powering the world’s very first room air conditioners, back in the 1920s, and Carlyle has never surrendered its leadership position in compressor technology. Today, its products are manufactured all over the world: in Europe and Asia, as well as the United States. The resulting products are sold in 172 countries on six continents around the world.

Paul Tollar, business manager for Carlyle Compressors, said that over time Carrier Corp., a business unit of United Technologies (NYSE: UTX), has moved to strengthen the Carlyle brand in a move to increase the unit’s external compressor sales and visibility. “They want to go to a more neutral position,” Tollar explained, and the strategy is clearly working. Currently Carlyle ranks as the number two company in the world for compressors its size, though Carlyle remains number one when it comes to innovation. Recently, the firm has thrown itself headlong into the development of compressors that are designed to use alternative, environmentally sound refrigerants, which in turn will reduce the amount of chlorine-containing refrigerants that are being released into the atmosphere, depleting the earth’s ozone layer. After launching an aggressive program to develop reliable non-ozone depleting refrigerants, all Carlyle compressors are qualified for use with refrigerants listed as compliant by, and in many cases ahead of required schedules of the Montreal Protocol, including R-134a, R404A, and R-410A.

Powering the military
In the early years of the company, Carlyle, working in tandem with its parent Carrier, concentrated heavily on developing new types of units for department stores, theaters, and other large venues, which was a factor in the rise of central air conditioning in the 1950’s. The company also moved into other uses, including defense work, the American space program, and pharmaceuticals.

In 1957, a Carlyle “high-shock” hermetic compressor was designed for the U.S. Army to provide portable essential cooling and refrigeration under the most severe battle conditions. In addition, the nation’s Minuteman Intercontinental Ballistic Missile Program was dependent on Carlyle compressors to maintain critical temperatures in the missile silos.

Since 1988, rotary compressors have been manufactured by Carrier Ltd. Korea, a joint venture. It is one sign of Carlyle’s commitment to both manufacture and market compressors around the globe.

Looking to the East
Tollar said that, in line with growing business trends, some types of business have migrated to Asia by necessity. One large and growing customer group is refrigerated large containers that are safe transport for temperature sensitive goods from the Pacific Rim to North America.

“Some export container units are built in Asia, so the rationale is to move all of our production closer to our customers,” he explained. In 2002, Carlyle announced opening of Yileng Carrier in Shanghai, China for the manufacture of reciprocating and screw compressors. While growing globally to meet customer needs, Carlyle does still maintain several large production facilities here in the U.S. Since 2001, the company has shifted an increasing amount of its domestic manufacturing to a plant in Stone Mountain, Georgia, where the Paragon twin-screw compressor is now manufactured, along with compressors both for the remanufactured and for the Original Equipment Manufacturer (OEM) segment.

Additionally, the firm has a partnership between Carrier and Bristol Compressors to produce scroll compressors at a venture called Scroll Technologies in Arkadelphia, Arkansas and a joint venture between Carlyle Compressor Company and Howden Compressors Ltd. in Glasgow, Scotland. But then, Carlyle virtually invented the world of compressors in the early 20th Century, so it’s not surprising that the firm would cover the globe in the 21st Century.