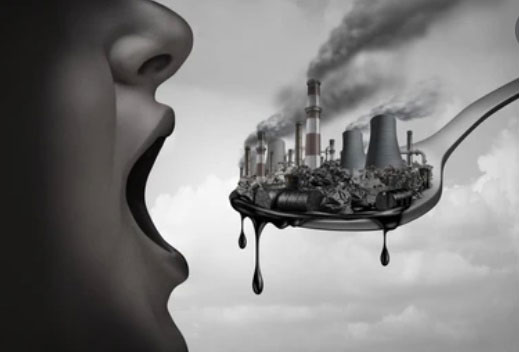 Our industrial agriculture uses 1.1 billion pounds of chemical pesticides every year, many of which are carcinogenic, and neurotoxic.

We have been silent bystanders for far too long, watching the agribusiness sector forsake the natural balance between the environment, health, and crop production, in pursuit of a much larger goal: to produce enough food to feed a booming population.

We pay for food in many ways, not just at the grocery checkout counter, and the true cost varies according to how the food is obtained and how well or poorly it contributes to our health. Herbicides and pesticides leave behind toxic residues on food crops, affecting the genetic makeup of the plants, their nutrition, as well as, consumption by humans. We have prioritized food quantity over food quality, and we are now ingesting chemicals into our bodies that we were never meant to.

The Impact of Industrial Farming on Public Health and the Environment

From the use of heavy applications of artificial fertilizer and pesticides to the effects of water pollution, land degradation, climate change, and the obesity epidemic to name just a few, our current food system has a significant number of steep costs to our environment and our health.  Experts from around the world agree that these very real costs far outweigh the benefits of “cheap” food; they are estimated at $ 4.8 trillion every year. These costs aren’t determined in the checkout line, yet consumers today and future generations tomorrow will bear the brunt of this huge financial burden through healthcare costs.

CDC estimates that each year roughly 1 in 6 Americans get sick and 3,000 dies of foodborne diseases, while the antibiotics routinely fed to livestock are breeding antibiotic-resistant bacteria that have us on a path to a “post-antibiotic” era in which many common infections will no longer have a cure and, once again, kill unabated. Fertilizer runoff from big farms makes its way into nearby rivers, oceans, and lakes, wreaking havoc on our freshwater and marine ecosystems and renders water undrinkable in many agricultural areas, or only drinkable after expensive treatment methods. Without a broad base of farmers, rural America has been particularly harmed by persistently higher rates of poverty, drug epidemics, and rapidly rising rates of suicide.

Exposure to some types of chemicals can cause an environmental illness, which can result in serious hardship on every level, from physical to psychological and burdens us with seemingly insurmountable economic costs, both personally and as a society. Children are particularly susceptible to environmental contaminants and studies have shown significant financial costs associated with protecting children from hazards and treating chemical-induced diseases. There is strong scientific evidence that indicates that individuals over-exposed to toxic herbicides, like paraquat – a popular end-use product, in their teens and young adult years had more than a twofold risk of developing Parkinson’s disease.

We Are Actually Paying Far More Than We Might Possibly Imagine

The predominant approaches to food production, distribution, retailing, and consumption are causing significant damage to soil, biodiversity, and public health in many ways: the obesity epidemic, antibiotic resistance, and more. If we scratch beneath the surface we’ll find that we are actually paying far more for it than we might possibly imagine.

We are either paying for this damage in hidden ways, for example, through the cost of water treatment processes that may be used to remove some pesticides from contaminated water; taxes raised to finance misdirected agricultural subsidies and environmental clean-up costs, including many of those relating to flooding. We are also paying the costs of diet-related illnesses such as diabetes, heart disease, osteoporosis, cancer, and allergic and autoimmune diseases, many of which are being directly linked to the way food is currently produced and consumed.

EPA-Approved Pesticides Contain Nearly 900 Active Ingredients, Many of Which Are Toxic

Debates surrounding outlawed toxic chemicals such as paraquat – also often referred to as Gramoxone, should not focus only on their ban but also the risks they pose to our health. Despite of its substantial and demonstrated risks, the ban of paraquat has led to divisions since the decision can be interpreted from different perspectives.

Residues of paraquat gradually accumulate in the soil surface and aquatic environments that ultimately enter the food chain. Paraquat has served over six decades to control annual and perennial weeds. It is acutely toxic, and in order to prevent accidental ingestion, it has a distinct blue dye and odor added to it. The EPA classifies paraquat as a “restricted use” chemical, meaning that only licensed applicators can use it. Previous studies found that the weed killer paraquat increases the risk of developing Parkinson’s disease in exposed farmworkers.

Genetically engineered crops have dramatically increased overall pesticide use. Some GMO plants have been engineered to produce their own pesticides; other GMO crops have been modified to be resistant to broad-spectrum herbicides. This has led to an increase in overall herbicides use. As a result, more herbicides are then necessary.

Despite the known dangers of paraquat, which can wreak havoc on human health even in small amounts, its use in the United States is higher than it’s been in the past 20-plus years, rising an approximate 200 percent since 2009. The increase has been triggered by its use on super weeds that have developed resistance to glyphosate, commonly sold as Bayer’s Roundup. U.S. farmers currently use more than 8 million pounds of paraquat dichloride each year.

This begs the question: what are we doing to support the reduction of pesticides in our food? Modeling an agroecological future by providing a sufficient and healthy diet to a growing population using ecological farming and adopting hazardous alternative herbicides to control weeds with the same or higher levels of efficacy than chemical herbicides, paying special attention to paraquat, are two potent strategies available for pesticide reduction.

About the author:
Treven Pyles is the Administrative Director of the Environmental Litigation Group, P.C., a law firm with over 25 years of experience in providing quality legal assistance to people injured by toxic exposure.