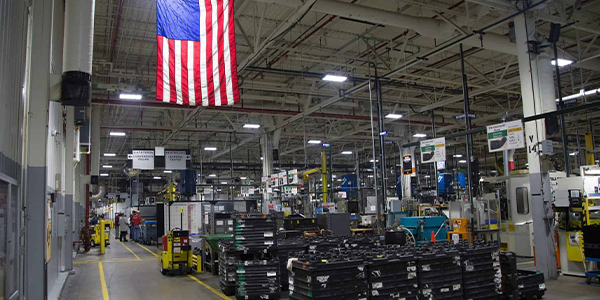 The United States is a nation of vast natural resources, an educated workforce, a superior transportation network, and a democratic political system, which, despite its many faults, preserves economic and social continuity from one generation to another. Building on this foundation, our ancestors forged an environment that encourages economic growth, and during the last century we built the most awesome economic power the world has ever seen. We entered the 21st century in an enviable position of world leadership endowed with economic, political and military influence that other nations regard as a benchmark for human progress – even those that profess to despise us and our values.

But our leadership is not a birthright guaranteed by history. It was won through a relentless campaign against adversity, and it can only be maintained and enhanced through a continuing campaign against even greater adversity than that our ancestors contended with. The global marketplace of the 21st century is the most intensely competitive in history as great nations near and far join in the quest for prosperity and opportunity. Many of these nations are endowed with natural resources as great or greater than those available to us. China in particular is moving rapidly into the modern world, transitioning from the economic stranglehold of socialism to the free market, unleashing the pent-up power of 1.3 billion intelligent, hard-working people who have been stifled for far too long. The emergence of China as a major world economic power presents us with unprecedented challenges.

To rise to this occasion, and preserve our legacy for future generations, we need to take a long hard look at ourselves, analyze our strengths and weaknesses, and develop a strategy for becoming more competitive in the global marketplace in the long term – in full cognizance of the magnitude of the challenges we face.

Our greatest strength
Our foremost challenge in this contest, as any sports coach will tell you, is to rely on our greatest strength – and America’s greatest economic strength has always been creativity and innovation. Since this country’s founding, Americans have been eager to embrace new concepts and capitalize on them. We’ve developed ingenious new systems for production and distribution and unlocked mysteries in diverse areas such as health care, technology, engineering and industry. Americans have always been willing to go beyond the beaten path, experiment with radical new ideas and invest in the future.

All the while, manufacturing has been a critical seedbed of America’s creativity. Manufacturing generates nearly two-thirds of industrial research and development, which is a major reason why manufacturing accounts for three-fourths of the nation’s exports and supports more than 20 million high-paying jobs. Innovation has generated the productivity that has accounted for half of the GDP growth over the past 50 years, and manufacturing continues to set the pace. Today, despite unprecedented global competition, total manufacturing output and productivity are at record levels, capital investment is rising and product quality has never been higher. By itself, U.S. manufacturing would be the eighth largest economy in the world.

But while there is no question that our nation’s strength lies in our leadership in innovation and productivity, it is equally true that our leadership in this all-important area is being challenged as never before. A recent National Association of Manufacturers (NAM) report by The Manufacturing Institute found that downward trends in U.S. manufacturing innovation pose a serious threat to America’s long-term economic growth and living standards.

America’s continuing leadership in innovation and the production of high-value manufactured goods is essential to our nation’s long-term economic growth, productivity gains and standard of living. But America’s economic leadership will be at risk if current trends continue. We are being challenged by intense global competition, a looming skills gap that poses a future worker shortage, and by increased structural production costs. The significance of the latter cannot be overstated. Ill-conceived domestic policies have created a cost burden on U.S. manufacturing that seriously compromises our ability to compete in the global marketplace. The external costs of production associated with taxes, environmental regulations, litigation, health care and energy alone add 22.4 percent to the unit labor costs of manufacturing in the U.S. compared to our nine major trading partners. We hear a great deal about the advantages of some of our trading partners that have lower wage rates than we do, but our greatest disadvantage lies in the unnecessary burdens we impose on ourselves.

Energy and investment
The cost of energy in the U.S. is becoming a severe problem for manufacturing. Over the years, Congress has enacted a series of laws that encourage manufacturing to become more dependent on natural gas for energy because it is regarded as more environmentally friendly than many other fossil fuels. At the same time, Congress has made it increasingly difficult to bring on line more sources of natural gas, resulting in a price squeeze. For many industries that rely on natural gas for both energy and as a feedstock, such as chemicals and plastics, the soaring cost of natural gas has become unsustainable. Of some 120 chemical plants worth more than $1 billion being built in the world today, exactly one is in the U.S. And yet the Congress steadfastly refuses to permit access to the vast supplies of natural gas in the Arctic National Wildlife Refuge (ANWR) and the Outer Continental Shelf (OCS).

And while the United States continues to spend more than any other country on R&D investment, U.S. growth in R&D has averaged only about 1 percent per year in real terms since 2000. Collectively, the world’s fastest-growing economies are on track to catch up to the U.S. in R&D investment. From 1995 through 2001, the emerging economies of China, South Korea, and Taiwan increased their gross R&D investments by 140 percent. This is a “wake-up” call to invest in America, in our current and future workers and in our ingenuity. In his State of the Union Address in January, President Bush recognized this core challenge to our nation’s economic leadership, and responded forcefully with his American Competitive Initiative. The President’s commitment to increase funding for R&D in the public sector and improve science and math instruction in our schools is exactly what we need, as is his proposal to make the R&D tax credit permanent. It is simply absurd that we have to fight to have that most basic provision renewed every year.

Proactive agenda needed
At the NAM, we know from our research that these measures will go a long way in addressing the concerns for manufacturers and our economy. They echo what we’ve been saying in our reports and the NAM’s 2006 Agenda – and we commend the president for recognizing the importance of America’s economic and technical leadership in the world.

The NAM is working with the Bush Administration and Congress to advance pro-growth policies to promote innovation, investment and productivity and ensure a healthy manufacturing economy in the future. We are working with government at all levels to foster a new generation of manufacturing workers who can handle advanced manufacturing technologies. America’s glory days are not behind us, but rather are a continuing reflection of our capacity to adapt to a changing world.

But we must be proactive and meet these challenges head on. As manufacturers, the backbone of the U.S. economy, our innovation and ingenuity are being put to the test as we bridge the gap to the 21st century. Working together, we will continue our world leadership through the next century and beyond.

Michigan Governor John Engler is president of the National Association of Manufacturers, whose mission is to enhance the competitiveness of manufacturers by shaping a legislative and regulatory environment conducive to U.S. economic growth and to increase understanding among policymakers, the media and the general public about the vital role of manufacturing to America’s economic future and living standards. Visit: www.nam.org.