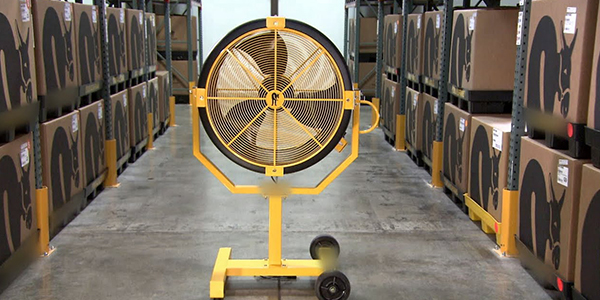 When Jay Henderson encounters commuting difficulties on his morning drive to work, it’s not because of other cars. “If I get stuck on my way to work, it’s usually because of a flock of turkeys, two deer, a tractor or a school bus,” says Henderson, vice president of marketing for Robinson Industries, a manufacturer of industrial fans headquartered in Zelienople, Pa.

Much has changed since Henderson’s great grandfather, J.R. Robinson, founded what became Robinson Industries with his father in 1892. But certain things have stayed the same, and not just turkeys in the road.

“We were founded on a principle of pride in craftsmanship. While the applications have changed over the years, that underlying principle has not,” Henderson says.

In the 1890s, the United States was midstream in its rapid post-Civil War shift from an agrarian economy to an industrial one reliant on coal power. Increasing demand for coal led to deeper mines and more frequent explosions caused by the pooling of methane gas in the deep shafts. The proverbial “canary in the coal mine” was meant to detect methane before workers descended, but deadly explosions were common.

In 1892, J.R. Robinson, a mechanical engineering graduate from Cornell University, formed Robinson Machine Company with his father, Samuel B. Robinson, an English émigré and former master mechanic with the English Crown Coal Company. J.R. became chief engineer of the company, with responsibility for designing mine and mill equipment such as hoists, cages, crushers, steam engines and steam boilers. But it was his work designing a fan to ventilate mine shafts that earned J.R. a spot in the history books. He became a leading expert in coal mine ventilation and designed systems that measurably reduced the number of disastrous methane explosions. His book on the topic, Practical Mine Ventilation, was required reading by colleges of the day, and it still appears on the occasional syllabus, said Jay Henderson.

When J.R. Robinson took over for his dad in 1908, he focused the company’s efforts on air-moving equipment. In 1931, he was awarded a patent for the first combination automobile heater and windshield defroster, designed for his Model A Ford. During World War II, Robinson built fans to ventilate the holds of ships, which shipyard welders used to provide fresh air to the ship’s compartments during their fabrication.

During the 1940s and 1950s, the company designed and built equipment that controlled air movement, moisture and heat for drying china sinks and toilets. Roger Robinson, who was president of Robinson in the late 1940s, was instrumental in designing a fan and air handling system to dry agricultural hay in farmers’ barns. The system reduced spontaneous combustion fires in the barn and preserved nutrients in the hay. In the early 1960s, the company designed an induced draft fan that handled 600-degree air laden with cement dust.

The development of environmental regulations “was an important development for anybody in the fan business,” Henderson says.

Swing Blade
Today, Robinson’s fans are engineered for specific industrial conditions, using, for instance, alloys for continuous operation at temperatures ranging -40°F to 2,000°F. The fans also come in designs that operate at “tip speeds” (the rate at which the tip of the blade spins) of up to 600 miles per hour for drawing large volumes of air. Others have wheels 180 inches in diameter and can weigh as much as 100,000 pounds for moving air heavy with particulates. Others use alloys that can withstand the effects of corrosive chemicals.

The company offers 12 main fan designs with names such as Airfoil and Backward Curve. These and other designs are engineered and built to handle airflow capacities up to one million cubic feet per minute and pressure ranges up to 120 inches water gauge. The fans are used in cement, power, coal, steel, mining and pulp and paper facilities throughout the U.S. and the world. Robinson builds all engineered fan wheels up to 180 inches diameter made from alloys chosen specifically for each job’s requirements.

In a move harkening back to J.R. Robinson’s coal mine ventilation days, Robinson Industries recently developed a coal mill exhauster design that uses dust deflectors and new blade shapes to minimize contact between the abrasive dust-laden air streams and the fan-wheel blades. The fan is lined with ceramic tile and with tungsten carbide. After 50 weeks in operation at a large mid-Atlantic power plant, Robinson’s non-overloading fan showed virtually no wear, according to company officials.

All fan designs result from ongoing research and testing in Robinson’s lab facilities. Prototype fans are tested on the basis of air performance, sound and vibration, to ensure quiet, high-efficiency service.

“When you take a piece of steel, and swing it around at 600 mph, it tends to stretch like taffy. You need special steel, bearings, and stress testing of the application. It’s not like sticking a fan on your roof,” Henderson says.

The company also repairs existing fans from other manufacturers, a service that often creates business for its new fans, Henderson adds.

Robinson designs and manufactures its air-moving equipment in its 100,000-square-foot headquarters facility in Zelienople. The building houses machines such as plate rolls, balancing machines and computer-controlled plasma-burners. That latter cuts steel shapes using a plasma-driven cutter controlled by a computer-driven pattern program that helps minimize scrap metal. The company also has plants in Lakeland, Fla.; Trussville, Ala., and Salt Lake City, Utah.

A typical production process starts with Robinson engineers working with a customer to understand volume, pressure, temperature and air stream particulate requirements. They then help select fan size, design, and materials that will withstand hazards such as corrosion and abrasion. The engineers also design to accommodate other accessories in the air moving system, such as motors and dampers. Once customers agree on the design, an order is forwarded to the drafting department, which provides a “footprint” or assembly drawing for the customer. When those drawings are approved, “detail” drawings go to the manufacturing floor while another set of drawings go to the nesting department, which positions the shapes to be cut from sheets or plates by the plasma burning machine. Another process includes machining the shaft for and installing it into the wheel and balancing the final assembly. The system is painted, assembled, tested, disassembled, shipped to the customer and reassembled in the field by the end users, a contractor or Robinson’s own technicians.

“Every single job is built from the ground up. There are no just-in-time, assembly line products here,” Henderson says. “Our strongest selling point is personal service. We’ve got the capability, the longevity and the technology to back it up, and we can make almost any fan you want.”

It’s a promise that J.R. Robinson offered to customers 100 years ago, and it’s the same promise his descendants offer today. 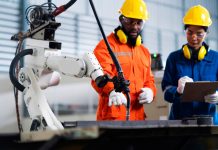