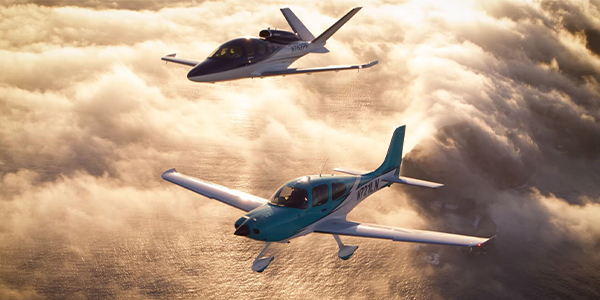 Another business trip tomorrow, huh? Sure, the flight might not take long, but the process sure will. Sit through rush hour traffic, endure the mile-long security line, submit to security “strip search,” undergo luggage dismantle, suffer chatty passenger seated to your right, stomach puny food portions, withstand subsequent delays. Arrive: exhausted.
Now, consider the Cirrus way: hop into your very own aircraft, fly in luxury, comfort and safety and arrive with the energy you need to do business.

Los Angeles-born David Coleal, president and COO of Cirrus Design, is a convert himself. He was no stranger to planes and aviation; he grew up around them (his dad was an employee of Edwards Air Force Base). After being hired at Cirrus, he finally got his pilot’s license. “We fly like this for business and pleasure all the time. I recently flew from our headquarters in Duluth, Minnesota, to a small mountaintop airport in North Carolina in five hours, a trip that is literally impossible on commercial airliners. Members of my company fly from Duluth to our Grand Forks facility on a regular basis. It’s usually a four to five hour drive. We take it for granted. To us it’s comparable to getting into a car. In fact, the cockpit of the Cirrus is inspired by the world’s finest automobiles.”

World’s Most Desired Airplane
Cirrus Design began in 1984 as a kit airplane design and manufacturing company in Baraboo, Wis. In 1994, it moved its headquarters to larger facilities in Duluth, Minn. A little over a decade later, Cirrus enjoys the distinction of being the world’s second largest manufacturer of single-engine, piston-powered aircraft, and its SR22 is the industry’s best selling model.

When Cirrus moved to its Duluth headquarters, it began research and development of the SR20, which was awarded FAA Type Certification in 1998. When Cirrus introduced the FAA-certified SR22 in 1999, it knew it had something. “We had 600 orders before we even had a finished product,” remembers Coleal. “It’s like getting the mousetrap right. The SR22 is perfect because it’s a substantial airplane that’s also practical and affordable. It’s great for the non-pilot, a pilot needing personal transportation or a fleet customer that needs the best plane to meet the demands of a multiple-aircraft operation. Since its introduction, we’ve evolved the plane to be even more technologically advanced and easier to fly.”

Cirrus believes the proof is in the product. “We demo our products as often as possible. Once we get someone in the cockpit, they’re sold. And we have a saying here: `Once they fly, they usually buy.'”

Cirrus staff recently flew a Cirrus model to Mammoth, a popular California ski resort and a seven-hour drive from Los Angeles. “We landed it right on downtown Main Street. It was located at the gondola ski lift, and we let people get in and out of it to have a look,” says Coleal. “People have the option of learning to fly it themselves or hiring a pilot. It’s not really that expensive. The truth is, once you have access to the aircraft, you become dependent on the speed and lifestyle it offers you. It offers such freedom, you have real-time weather on board, 212 channels of music, entertainment, air conditioning, and it provides luxury and safety. Once people buy one, they usually are looking to purchase another.”

Cirrus currently offers six models ranging in price from $199,000 for its base model SRV to $520,995 for its newest and most powerful model – the turbocharged Signature Edition SE22. Cirrus caters to a wide cross-section of clientele. Its extremely active customer base includes entrepreneurs, businessmen, retirees – and most travel about 150 hours a year (the industry average is 75 hours). A growing percentage is first-time aircraft owners and first-time pilots.

Over 2,000 belong to the Cirrus Owners and Pilots Association (COPA). Each year, many of them come back to Cirrus’ headquarters in Duluth for an annual pilot pilgrimage and get-together known as The Migration. There, they are given the opportunity to share their real-world experiences flying Cirrus aircraft. Cirrus also holds a weekly coffee with customers. “We get exceptional input from these meetings,” says Coleal. “We just sit with our customers over coffee and ask them how their training is going, their likes and dislikes about the product. We take their feedback and feed it back real-time to engineering and the production process. We have a real pulse on customer issues because there is no middle man – they’re talking directly to our leadership team most of the time.”

Safety Comes Standard
Nothing is more important to Cirrus than safety. The company pioneered the Cirrus Airframe Parachute System (CAPST) technology to give pilots and passengers one more option in the event of a serious in-flight emergency. When activated, the life-saving CAPST system launches a 55-foot diameter parachute that lowers the airplane to the ground while suspended securely beneath the parachute. The security and peace-of-mind provided by CAPST is unequalled, and comes standard with all Cirrus aircraft as part of its role as the industry’s safety leader.

Pioneering the Sky
Cirrus recently added 100,000 square feet to its composite fabrication facility in Grand Forks, making it one of the largest in the country – producing 110,000 parts annually. Cirrus’ headquarters, with its generous 250,000-square-foot plant, allows for painting, bonding, assembling, paint, detail and factory direct delivery. “Factory direct delivery gives our customers four valuable benefits,” says Coleal. “They receive the best possible price because they buy directly from us; the plane is configured to their precise specifications so they can choose their avionics, stripe scheme, upholstery and features; the purchasing process is simplified; and they get to visit the factory and see how the plane is built and receive transition training in our training center.”

Cirrus is firmly fixed on its core values of innovation, safety, comfort and performance as it ventures into the future and explores global markets such as Indonesia, China and Australia. The company is even developing a jet. “We’ve always been about changing the industry and making general aviation easier, more accessible and a lot more fun than it has been in the past,” says Coleal. “In that same tradition, we’re designing our personal jet to make jet travel and ownership easier, more accessible and a lot more fun than it’s ever been before. We want people who don’t know about our approach to personal transportation to find out about it and once they do, they’ll realize they can’t live without it.”