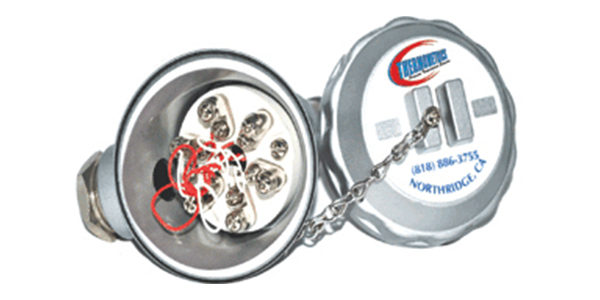 The next time heat reaches your freezing feet while you’re cruising in your automobile, you can thank an industrious Pennsylvania company for leading the field in developing the technology that allows your car to adjust its temperature. That same technology is what adjusts the temperature in your refrigerator. It also plays an integral part in the function of heart catheters.

Adhering to a worldwide philosophy of a commitment to excellence, Thermometrics has become the leading supplier of heat-sensing units called thermistors. With more than 60 years of experience behind it, Thermometrics has positioned itself as a leader in supplying more than 62 million of its thermistors to producers of thermal dilution heart catheters for the medical field.

The company also has established itself as one of the largest suppliers of thermistors for the automobile, industrial and consumer-goods markets.

Thermistors are at the heart of most temperature sensors, enabling the accurate measurement of temperature. The trends within this industry in the last several years, explains Ted Krellner, vice president of engineering, are toward tighter tolerances, better long-term stability, longer life and temperatures able to reach from 800 to even 1,500 degrees. Over the years, says Krellner, the design has gone from glass thermometers to those that give electronic measurements, which can calculate temperatures within seconds. The use of electronics, he maintains, has driven the changes in the designs of thermistors.

Found Everywhere
Today, Thermometrics’ thermistors are a part of everyday life. Take, for instance, the auto industry. In 1980, when control systems were electromechanical, cars had perhaps two thermistors adjusting heat – and those were mostly used in high-end vehicles. As computer-controlled systems were designed and developed, several different heat-sensing zones became the norm, including temperature-controlled seats for both the driver and passenger. The sensors themselves have become smaller, with faster responses.

Now there are four or five sensors alone used to track the temperature of air coming out of each duct inside the vehicle: two sensors for engine control and sensors in oil pans and in the transmission area. “Thermistors are used to measure the temperature of the transmission and to tell you when to change the oil,” Krellner says. “They’re used in virtually all control algorithms in the automobile.”

Thermometrics now leads the market in supplying world-class thermistor units to automotive manufacturers on five continents. The company offers one of the most comprehensive ranges of products in the world, including high-temperature thermistors, gauge drivers and lead-frame technology.

In the medical field, Thermometrics’ NTC thermistors are renowned for their accuracy, reliability and small size. In fact, Thermometrics has become a world leader in thermistor temperature sensors for medical applications. The products are used extensively for heart catheters, esophageal stethoscopes, fever thermometers, skin sensors, blood analyzers, incubators, respiration monitors and hypodermic-needle sensors, as well as in many other applications.

As electronic controls have replaced electromechanical controls in motor vehicles, they have also become the norm in standard household appliances as well, requiring the more sensitive thermistor-based controls designed by Thermo-metrics. These thermistors are used in microprocessor-based systems in such appliances as refrigerators, oven ranges, washing machines and dryers. “These systems allow more flexibility in control,” says Krellner.

In the telecommunications systems market, thermistors are used to improve reliability and performance by protecting equipment from high voltages, short circuits and other hazards. Using high-performance ceramics and the latest technology, Thermometrics provides solutions that offer long-term reliability and stability over many temperature cycles.

Depression-era Success
As with many companies that have grown to enjoy global recognition in the last several years, Thermometrics has humble roots. It was founded by Ben Reuscher to manufacture metal graphite brushes in the late 1920s. It has grown into the most automated thermistor company in the world, with substantial vertical integration, making everything from sensing elements to the sensor. With operations in Edison, N.J., the United Kingdom, India, St. Marys and Mount Jewett, Pa., Puerto Rico, Japan, Germany, Korea, Mexico and Hong Kong, Thermometrics is part of the Spirent Sensing Group, which itself is part of Spirent PLC, headquartered in the United Kingdom. The company has achieved more than 100 international quality approvals, including ISO 9001 and QS 9000.

Thermometrics’ significant investment in research and development has made it a world leader in custom-design capabilities. A design and engineering team works as part of the customer’s in-house staff to develop thermistors and assemblies unique to its needs. In addition, the company’s sales and applications staff is experienced and trained to provide the one-on-one technical support required to ensure customers the highest levels of quality and reliability possible. Thermometrics, adds Krellner, works closely with its customers around the world to form long-term relationships that provide high-quality solutions to match a range of demanding needs.