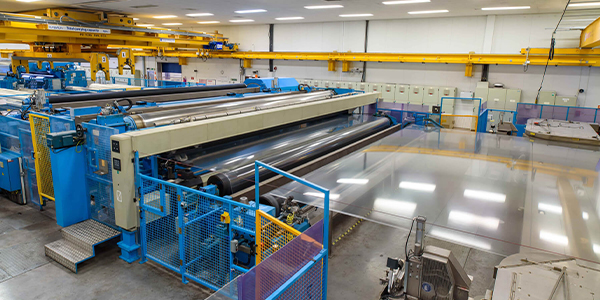 There’s that word again: innovation. There are few words that can replace it. Creativity, perhaps, or ingenuity. But nothing describes a company’s technological harvest quite like innovation; so much so, that it’s a word that DuPont Teijin Films’ Kevin Corby can’t help but include in nearly every sentence. But when you’re connected with one of the most time-honored corporations in the world it is hard to not discuss, well, that word.

And at DuPont Teijin Films there’s a lot of that word going on. “We have been the leading innovator and that will continue to be a key to our success,” says Corby, DuPont Teijin Films’ regional business director for the Americas. “Our objective is to add functionality to polyester film to improve our customers’ productivity and foster the creation of products.”

To get its message across, DuPont Teijin Films has put forth a strategy to improve the competitiveness of its North American business and reposition itself for growth. The plan, to be implemented over the next several months, will improve asset to market alignment, more effectively deploy resources and capital to focus on future growth markets, and increase productivity. “We are committed to the future of PET and PEN polyester films and see these actions as a key step toward aligning ourselves to future markets,” Corby had said at the time of the announcement.

It is a strategy that positions DuPont Teijin Films on new terra firma. Its hold in the old generation of technologies centered on the production of magnetics, VHS video photography, X-Ray and microfilm – all have been in rapid decline since the insurgence of digital. The impact of globalization, in particular the entrance of the Asians into regular markets, further underscored the need to regroup.

“We realized we needed to maximize productivity and reduce costs, so we focused on streamlining operations while continuing to stress innovation,” Corby explains. In the U.S., this reorganization of sorts culminated in the company relocating its regional headquarters to outside of Hopewell, Va., from Wilmington, Del., where the global DuPont Teijin Films headquarters remains. The Hopewell facility is situated alongside the James River, near the historic Jamestown settlement. Because its customers have opened global operations, DuPont Teijin Films has taken on the initiative to coordinate the global supply of polyester film, and continues to work successfully with multi-national companies.

Overall, DuPont Teijin Films’ history in the U.S. begins with the parent corporation’s acquisition of ICI in 1998, one of the largest polyester film suppliers in the world. In 2000 the company formed a global joint venture with Teijin, a leading polyester film manufacturer in Japan, and this enabled DuPont to put its mark in film production in the three major regions of the world. With sales of $1.4 billion, the DuPont Teijin Films joint venture produces 300,000 metric tons annually.

Blocking out the light
In line with its North American initiative, DuPont Teijin Films, leveraging its expertise in the polyester film-production industry, has targeted its efforts at next-generation technology with the recent launch of Direct-to-Media film utilizing UV curable ink-jet print technology. “This takes advantage of the technology trend of direct-to-media printing,” Corby explains, which enables the company to sell directly to printers of items such as signs and banners and light boxes, and bypasses the need to apply a specialty coating. “We can sell directly to people with UV curable printing machines, who are then able to print directly to our material,” he adds.

Corby stresses that DuPont Teijin Films has a full range of products with a solution for each imaging application. “Across our broad portfolio, the brand communicates the value,” Corby says. In this particular case, the brand is Melinex(r) DTM White Light Block (WLB) totally opaque film, widely used around the world for banner stands, pop-up displays, signs and window displays. White lightblock, Corby points out, totally blocks out light and shadow from behind, both of which weaken the front printed image.

“We continue to focus on innovation and showing customers how our technology can improve their production,” Corby explains, referring again to the company’s emphasis on marketing. “What we intend to do is find where in the value-chain our added functionality will benefit our customers. Having a better understanding of the downstream market is a key focus area.”

Another key focus area for the company is in the production of optically clear films for products such as LCD displays; this technology in the form of optical enhancing film, increases image brightness while reducing energy consumption. DuPont Teijin Films manufactures the product that is converted into the optical enhancing film; the process requires a smooth ultra-clear polyester film.

In addition, DuPont Teijin Films is identifying new markets in which its film technology could be put to widespread use, such as in the medical and healthcare areas. While the company already is offering a number of products in this area for items such as medical testing strips for diabetes and laminating films for medical packaging, “we also believe there are more areas for growth,” Corby explains, while adding that this foray will nonetheless require special regulations and further product innovation.

High-performance products
DuPont Teijin Films already produces a number of proven products that have become significant players in the global film market. For example, its wide range of print-on polyester base films offer a broad array of options for processing ease and efficiency as well as specialty; other options include clear, white and co-extruded films for prepress applications as well as super clear, white and matte films for flexo- and litho-printing plates.

Among its most popular products are the high-clarity/high-performance Mylar(r) and Melinex(r) polyester films, both used to produce window films that enhance the properties of glass. These films are then laminated and coated using special adhesives, ultraviolet (UV) inhibitors, and protective, scratch-resistant coatings by customers. Some window films are also metallized for specialized color and solar energy rejection properties.

In other areas, Melinex(r) polyester film has a proven track record providing high-performing films for automatic transit fare collection systems and prepaid telephone and university ID cards. This film has been used on items such as the New York City transit card, the Shanghai subway card, Italian and Polish phone cards and the Villanova University SMART ID card. With an increasing number of card applications moving to SMART technology, DuPont Teijin Films has developed a range of films specifically designed to meet the demands of this new market.

DuPont Teijin Films also promotes its Melinex(r) as a solution for print media needs, among the reasons is that there is no need to laminate. The company has supplied Melinex(r) polyester film to leading photographic companies, ink jet printer original equipment manufacturers (OEMs) and coater/converter companies, and these include Kodak, Fuji, Ilford and Konica for premium-quality silver halide print media.

Whether running a UV, rotogravure, flexographic lamination process, Melinex(r) label films, with their tensile strength and thermal stability, run better and faster in most equipment than alternative substrates, Corby adds. These films also offer direct-from-the-factory, pretreated or coextruded surfaces for improved adhesion of silicones and inks. Another area in which Melinex(r) has been shown to reap substantial benefits is in the printing of labels, an application for which the films have shown their “rugged durability, brilliance and gloss.” With built-in whiteness that is consistent from roll to roll and label to label, Melinex(r) white film ensures excellent first-read rates and fewer scanning errors when used in bar code applications, Corby stresses.

New in the Melinex(r) line is the Melinex(r) DirectPrintTM 329 – an enhancement of the company’s “tried-and-true” white film standard. This new product, Corby notes, not only has improved direct computer imaging, but also saves a priming step required for good laser, flexo and thermal transfer adhesion.

The Mylar(r) advantage
In the packaging arena, the company’s Mylar(r) laminating, metallizing, heat shrinkable and thermoformable films have shown high performance for a wide variety of applications. Among the features are an array of surface treatment options, a high surface gloss to matte surface finish and low haze/high clarity to white films.

Mylar(r) heat sealable, ovenable and refrigerated lidding films have an equally wide array of options including coatings that seal tightly to APET, PVC & CPET trays and also self-vent when trays are reheated in an oven. Additionally, the wide variety of sealants go from peelable to lock-up seals on HIPS, PP, HDPE, PVC and PET trays.

No bounds on innovation
With such a wide array of polyester film technologies it is not hard to understand that DuPont Teijin Films has taken a leadership position in its industry. The company understands it has a commitment to further its own technology portfolio to enhance the products of its customers. When you’re a company accustomed to being at the top, there is no limit to how many ways you can push the envelope of innovation.

“Our goal is to get our cost structure in line and productivity maximized so that we are in a position to further grow,” Corby says. We plan to leverage those technologies and products that have given us recognition to substantially enhance our role within the industry.”