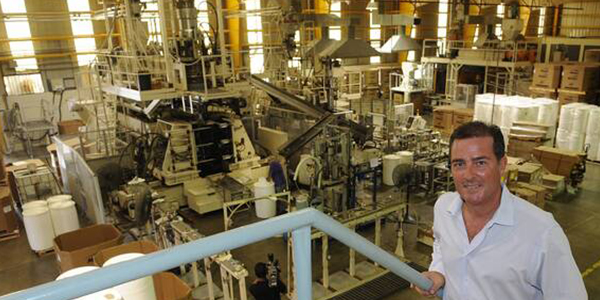 A business’ success often goes hand in hand with its founder’s leadership and Industrias Vassallo in no exception. In 1962, Salvador Vassallo founded the company in Ponce, the second largest city in Puerto Rico. Industrias Vassallo pioneered a new material at the time, plastic, producing and distributing pipes and accessories for the construction industry in the Caribbean. Since then, the company has diversified into multiple products, and expanded into the United States by acquisition of Syroco, Inc. in 2004. Syroco is a resin furniture and wall décor manufacturer with an artisanship tradition, which fits perfectly in Vassallo’s family of companies.

“Industrias Vassallo is a family business. My brothers were originally involved, but in 1989 I became the main stockholder of the company,” said Salvador “Chiry” Vassallo, CEO. “By the way, nobody knows me other than by my nickname, Chiry,” he added.

Vassallo, as his company, has grown to be an important figure in the Puerto Rican business and political arenas. He is currently the president of the Export Council of Puerto Rico, and an active advocate of San Juan becoming the location of CAFTA’s Secretariat.

The company and its founder have strong name recognition in and outside Puerto Rico. Both have become well-known players not only in the industry, but also in the regions where Industrias Vassallo distributes its products.

ITALIAN SETTLERS
The Vasallo family came to Puerto Rico at the end of the 1800s and settled in Yauco, in the southwestern part of the island. Soon, Salvador’s father opened a hardware store in Ponce, the “pearl of the south.”

“At that time, the sugar industry was flourishing in Puerto Rico, and the economy was active. My father saw the opportunity to enter the construction industry manufacturing windows and building blocks. In 1962, we concentrated in manufacturing pipes with plastic, a new material that was revolutionary for plumbing and electrical accessories. We started with small diameters, such as half-inch to eight-inch pipes. Today we manufacture up to 48-inch pipes,” said Vassallo.

Twenty years later, Industrias Vassallo was actively exporting to the United States, and opened a distribution center in Miami, Fla., to facilitate transportation and distribution. Vassallo continued diversifying his company and in 1990, he founded the Vassallo Molding Company. The new venture attracted clients such as Wal-Mart, K-Mart, and Home Depot.
In 2004, Industrias Vassallo acquired Syroco Incorporated, a company founded by Adolph Holstein in the late 1800s. The old company was focused on wood products for home décor. Some of its products became collectables over time because of their excellent craftsmanship. In the 1960s, Syroco began manufacturing resin molded products, which included a patio furniture line.

The company went through a series of acquisitions. In 1995, it was sold to Marley PLC, headquartered in Sevenoaks, England. At that time, Syroco was manufacturing injection-molded resin furniture and accessories, extruded molded PVC, and aluminum furniture. In 1999, it was sold to Fiskars Brands, Inc., a global company producing consumer and industrial products of Finnish origin. Syroco Division was sold to Vassallo in 2004, and continued to operate under the same brand name.

“We offered to buy Syroco three years before, but we were not successful at that time,” said Vassallo. Fiskars contacted Vassallo after owning Syroco for about five years. Increase in materials costs was the reason why the company went up for sale, and was on the market for about two years. “We found the company running low, without launching new products, upgrading equipment or producing any type of novelties for a long time,” said Vassallo.

Industrias Vassallo took over the plants and assets in Baldwinsville, Ark., Corona, Calif., and two in New York state, near Syracuse. Housing 800 employees in 2.4 million square feet, Syroco needed a major face lift. Since the acquisition, Industrias Vassallo has invested $4.7 million in building repairs, equipment and sales catalogues, launching new products. Some injection-molding equipment was sent from Puerto Rico, and some other, such as its IT systems, is being upgraded locally. “We expanded our sales portfolio with clients we already had, such as Home Depot and Wal-Mart, and added new ones, such as Target, Sam’s Warehouse, Lowes and Walgreens by offering a more extensive line of products,” said Vassallo.

Vassallo believes Syroco will expand rapidly. Industrias Vassallo is known as a company always looking to develop new products. In 2000, the company added Research and Development Corporation, which is in charge of research and quality control, and designing and producing new patents for all products. It also invested $15 million in expanding the Ponce plant to produce PVC. “Syroco seems the perfect complement for everything that our companies do in Puerto Rico, and it opens new possibilities for distribution in the international markets,” said Vassallo.

ADAPTING TO THE NEW MARKET
Despite the optimism in acquiring Syroco, and the future possibilities Vassallo saw in the United States, he cannot deny that the American market is facing difficult times. “The situation is chaotic, with prices going through the roof,” he said. Raw materials have incremented 100 percent this year only, and the natural disasters in the southern part of the country intensified the crisis in the industry, which mainly depends on oil prices. “Such increments cannot be added to the final consumer’s price, so the margins we are working with are getting smaller and smaller,” he added.

Regardless, the company is developing a production strategy that will reduce expenses such as electricity cost. Producing in Arkansas instead of Puerto Rico can save the company between 10 to 13 cents per kilowatt in energy bills. Hence, the efforts are addressed to improve this plant’s production for the U.S. and the Canadian markets.

Likewise, transportation costs are reduced if manufacturing is in the United States, which avoids costly maritime freights. But the main concern is to look for new sources of raw materials. “We are looking at South Korea and Brazil for resin supplies,” said Vassallo.
The urgent need to reduce costs is the result of advanced contracts, which cannot be renegotiated. “For instance, we negotiate a year long contract with Wal-Mart, and we have to guarantee the prices we agreed upon despite changing circumstances,” said Vassallo.
The company exports 20 percent of its production to Japan and other countries in Asia, Central America and the Caribbean, while 80 percent remains in the United States and Puerto Rico. Working at 70 percent of its installed capacity, Industrias Vasallo processes 250,000 pounds of resins daily.

CANNOT TELL THE DIFFERENCE
Vasallo’s craftsmanship is such that visually it is hard to tell the difference between original materials like wood or wrought iron, and the products made in resins.

Garden furniture includes several collections: Adirondack, Bistro, Brentwood, Garden, Imperial, Palladium, Seville and Treasure. Specialty seating is also available such as rocking chairs, and chaise lounges four use beside the swimming pool. All products are manufactured using high-grade resin, are UV protected and weather resistant for long-lasting performance. Another feature is the space saving design of chairs that can be stacked and stored.

Industrias Vassallo is using Krah Systems technology to manufacture large plastic pipes. Large urban developments and infrastructure require lighter and more durable systems that are easier to transport. Krah AC has developed equipment to produce a range of pipes with a working pressure of up to 10 bar. The production lines can reach an output of up to 1000 Kg/hour extrusion capacity. The technology also requires low cost investment, and produces a complete program of fittings in electro-fusion jointing technique.

These pipes are big in diameter, low in weight and very easy to install. The system provides resistance to chemicals, microorganisms, termites, rodents and other types of deterioration, with a lifespan up to 100 years.

THE NEAR FUTURE
Industrias Vassallo experienced sales growth of 6 percent in 2004, with $120 million in revenues. The recent investment in the newly acquired facilities will bring additional products and ideas to the table. “We are presently starting to manufacture containers for Pepsi and Coke,” said Vassallo. The research and development team is constantly approaching him with new ideas to be patented and produced.

Despite the difficulties of the present market, Vassallo believes the addition of Syroco will substantiate his many years of hard work in the industry. Vassallo also sustains that the company’s personnel has responded with excellence to the market demands and the different stages the company went through. Industrias Vassallo is now ready to face the challenges of a global economy, which requires fast decisions and adaptation to new demands.