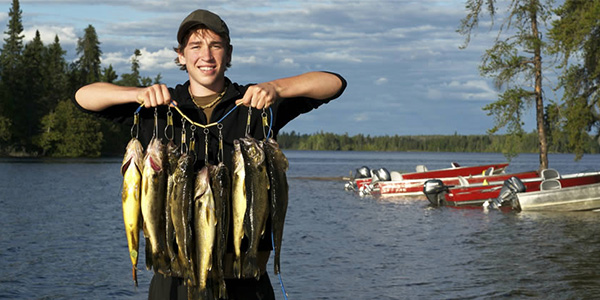 The Pure Fishing Inc. organization consists of the companies and brands that have truly defined the sport of fishing. These companies were founded by the inventors of much of the tackle in use today — spinning, spin-cast and bait-cast reels; graphite rods; castable and fishable monofilament fishing lines; superlines; the most advanced hardbaits on the market — and have been at the forefront of technology every step of the way. Each earned a unique reputation for excellence in its contributions to the art and science of angling. Innovation continues to be a major part of the Pure Fishing game plan, which is to maintain its dominant market position through its seven power brands and 30,000 products.

The original business, Berkley Fly Company, was a one-boy operation founded by 16-year-old Berkley Bedell in 1937 in Spirit Lake, Iowa, site of the firm’s current headquarters. Confident of his fly-tying ability, young Bedell took $50 of his paper route earnings to bankroll the enterprise. His dog Stubby and some backyard chickens were the original investors, contributing hair and feathers respectively. Berkley flies soon became recognized as exceptional enticements for bass and pan fish, and local fishing tackle shops began increasing their orders.

From that humble beginning evolved a firm now known as one of the world’s leading producers of technologically superior fishing tackle. Over the years, Berkley committed significant resources to research and development. The result was a legendary product lineup that today includes Berkley® Trilene®, the Lightning Rod®, Power Bait®, FireLine®, Frenzy® and a host of other advances that have resulted in fuller creels.

After years of continued success, Berkley Bedell was honored as the Small Businessman of the Year in 1964, receiving the award from President Lyndon B. Johnson. In 1970, the company went international. It founded Berkley International Ltd. with headquarters in Taichung, Taiwan; and established Berkley Canada in Portage la Prairie, Manitoba.

In 1988 Berkley acquired Fenwick Company, a manufacturer of premium fishing rods founded in 1952. Under the direction of the Clock family of Long Beach, Calif., which purchased the firm in 1960, Fenwick designed and manufactured its own proprietary rod blanks. Its unique advancements included the Flippin’stik, the rod that revolutionized bass fishing, introduced in 1968; and the HMG®, the world’s first graphite rod, launched in 1972. Fenwick is now recognized as a leading developer of fly rods, fly tackle, high-performance freshwater rods and premium saltwater rods.

Fenwick’s advanced technology continues to set performance standards with the Aramid Veil (AV) design of the Techna AV® and HMG AV® — the strongest and lightest construction ever created for a fishing rod. AV series rods are typified by fast actions and the provision of four times more impact resistance than ordinary graphites for “jaw-dropping performance” and “finishing school manners,” according to Fenwick literature. The keyword for the HMG AV® rod is “smooth,” with a bloodline traceable to the first graphite rod on the planet and updated for the most modern techniques, lines and presentations.

Berkley acquired Abu Garcia, headquartered in Svangsta, Sweden, in 1995. The purchase included Abu Garcia’s marketing and distribution divisions in the United States, Europe and Australia. The following year, Berkley purchased a majority stake in joint ventures with distribution companies such as Abu Garcia Finland and Cani Sport in Denmark.

Founded as a watch factory in 1921, Abu Garcia redirected toward the development of precision fishing reels in the late 1930s. The company went on to introduce the world’s first bait-cast reel. Today, the Svangsta facility is considered by many to be the world’s most advanced fishing reel factory. Beginning with the Abu Record® in 1941, the firm went on to create the famous generation of Ambassadeur® bait-casting reels in 1952 and the Cardinal® spinning reel in 1965. Abu Garcia has become a world leader in fishing reel development — from the legendary 5500C3 to the cutting-edge Ambassadeur Morrum® SX Mag and the revolutionary new Ambassadeur Eon®. The brand is also famous for its legendary Conolon® rods, Toby® lures and Abumatic® spin-cast reels.

In 1997, Berkley created the Red Wolf brand® for its retail partners, which needed a complement to the company’s other legendary brands. Red Wolf® helped Berkley to fulfill its mission to be “The World’s Best Fishing Tackle Company.” This brand is a complete line of fishing tackle and accessories, and is known worldwide for its strong shelf appeal, its value to cost-conscious consumers and its high profit margins for retailers. With its broad range of dependable, affordable tackle, Red Wolf® has come to mean more bites for the buck.

In 2000, Berkley created the parent title of Pure Fishing and acquired the Johnson Worldwide Associates fishing businesses. Pure Fishing reported revenues of $210 million that year, up from $76 million a decade earlier. During that same period, the company expanded from operations in three countries to 18, and the employee ranks rose to 1,200, representing 28 spoken languages. The acquisition included the Johnson®, Mitchell® and Spider® brands, distribution companies in the United States and France, and sales companies in Italy, Germany and The Netherlands. Also in 2000, Pure Fishing established a commercial center in Kuala Lumpur, Malaysia.

The Johnson® brand represents an accumulation of very unique, time-tested and performance-tested products. The Johnson Silver Minnow®, a tackle box favorite created by Louis Johnson in 1920, is still wobbling alluringly, shrugging off vegetation and flashing irresistible invitations to lurking lunkers. The Johnson® classic spin-cast reel, called the Tangle-Free®, was created in 1949 using an alarm-clock casing to house the prototype. The success of this and other Johnson® products can be traced to a simple and functional design philosophy aimed at creating easy-to-use, value tackle.

Mitchell® grew out of a French firm that made clocks, rods and reels. The company changed the sport of fishing forever when it invented the Mitchell 300 in 1948, the world’s first spinning reel, which made angling easy enough for everyone. More than 25 million Mitchell 300s have been sold since then. The Mitchell® brand has become synonymous with innovative saltwater and freshwater spinning-reel designs, along with a full line of rods and accessories.

The Spider® brand originated in 1994 with a California company that made law-enforcement equipment. While working with high-technology synthetics for bulletproof vests, technicians discovered that the gel-spun polyethylene fibers were ideal for other applications, including superstrong fishing line. Further research resulted in SpiderWire®, the strongest, thinnest and most sensitive fishing line ever produced. The brand soon became recognized for delivering premium products for serious anglers with aggressive styles. Spidercast® tackle, Spiderline Fusion® and Spiderline Super Mono® have brought dramatic expansions to the Spider® line.

The Spirit Lake headquarters of Pure Fishing oversees the world’s largest fishing tackle company, outside of the Japanese market, functioning through 15 regional operational centers around the globe. A staff of about 500 works in the 82,000 square feet of administrative space and 265,000 square feet devoted to manufacturing, warehousing, shipping and product innovation. Monofilament fishing line, artificial bait and accessories are the main products coming from Spirit Lake. Reels are produced in the 200,000 square-foot plant in Svangsta. About 45 percent of Pure Fishing’s sales come from sourced products, according to Ron Kliegl, vice president of U.S. marketing.

The heart of product innovation at Spirit Lake is the casting pool in its Fish Behavior Center. Studies in the 60 foot-long by 13 foot-deep pool are overseen by Dr. Keith Jones, a world-renowned chemoreception expert and founding researcher of Berkley Power Bait®, who serves as Pure Fishing’s director of fish research. Pure Fishing catalogues report that enhanced formulas have produced baits that not only attract fish by appealing to their keen sense of smell, but also encourages them to keep the bait in their mouths up to 18 times longer than with competitive brands.

The pool features underwater viewing panels to observe fish reactions to experimental artificial baits of the soft, dough and hard varieties. “We’re well known for adding effective scents to our baits,” Kliegl says. Also included is a water tunnel designed with computer-driven analysis systems to study and precisely measure hardbait motion including pitch and yaw. “Water tunnels are a standard tool of the aeronautics industry to design airplane wings and bodies,” Kliegl says. “No one had ever thought before of using them for designing fishing lures. Our tunnel is a custom-designed, souped-up, high-speed version that lets us generate fast currents.”

Pure Fishing President Tom Bedell, son of Berkley Bedell, took over the reins of the private company in 1979 when it was still known as Berkley. Tom Bedell has laid out a strategic plan for the next three years that contains the much repeated mission statement: “Building the World’s Best Fishing Tackle Company.”

“We are much more than a company designing, producing and marketing fishing tackle. We are fishing’s best partner on nearly every front,” Bedell says, referring to the firm’s cooperation with governments and public-interest organizations in caring for fishable waters and habitats. He cites the continuous efforts to promote and teach fishing, the company’s support of suppliers and retailers, and its partnership with co-workers in meeting the market’s challenges and achieving security and family quality of life.

The “Investing in Technological Leadership” block calls for improved market share through the timely introduction of new products within the standards set for quality, cost and performance. Fiscally related blocks are “Leveraging Global Sourcing” and “Securing Financial Strength.” The latter calls for achieving a brand operating income of 20 percent of sales and a minimum of 10 percent net earnings before tax on sales. The goal of the plan’s block 11, “Expanding the Market,” is to obtain a leader’s share of the $5.6 billion world’s fishing tackle market.

Though the Pure Fishing product line keeps expanding and its operations reach into the far corners of the world, it has never lost its focus. “At Pure Fishing, ‘Live to Fish’ is much more than just a slogan,” Bedell says. “It is everything we are. Our passions. Our goals. Our dreams. All that we do is centered on fishing.”