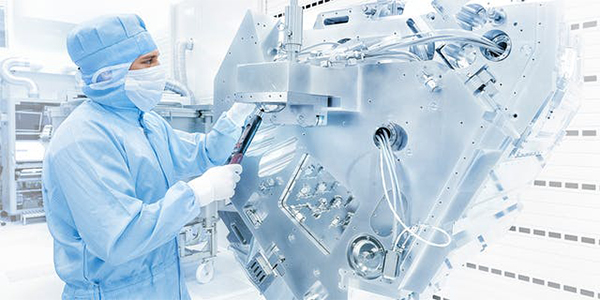 A review of the history of optics and measurement offers some eye-openers:

What do these facts have in common? One name: Carl Zeiss, “The Great Name in Optics.” This international company, headquartered in Oberkochen, Germany, has focused on optical engineering and the manufacturing of precision lenses since its founding more than 150 years ago. Now, the Carl Zeiss product offering ranges from world-renowned laboratory and surgical microscopes to the lenses used in semiconductor production to state-of-the-art planetarium projectors to optical lenses and ophthalmic technology to high-precision measuring machines.

In the United States, Carl Zeiss, Inc., was incorporated in New York in 1925 as an importer of the European-made products — microscopes, binoculars and Zeiss Ikon and Contax cameras, which were first available through importation beginning in the 1880s. The U.S. branch now markets and services an array of scientific and industrial instruments, and has become a manufacturer and global marketer in its own right. Headquartered in Thornwood, N.Y., the business has 1,000 employees and several operating divisions.

James J. Kelly, president and chief executive officer of Carl Zeiss, Inc., comments on the scope of the North America operations. “Carl Zeiss’ reputation for zero-fault tolerance and our ability to satisfy the most demanding and discerning customers offer a strong platform for growth in the U.S.,” says Kelly. “This market already represents over 20 percent of Carl Zeiss’ global business, and we aim to further expand it by leveraging synergies and cross-marketing opportunities between our U.S. divisions and strategic partnerships with cutting-edge vision- and imaging-technology companies.”

From Cells to the Universe
Describing the objectives of Carl Zeiss, Inc., Irv Toplin, corporate communications, says, “Our goal is to help our customers become more productive and more precise. Our work ranges from the microcosm — from analyzing and manipulating cells under a microscope — to looking into outer space with our planetariums, telescopes and satellite systems. Zeiss is about high precision and high quality.”

Toplin notes that the U.S. market is the parent company’s largest for medical and industrial microscopes, surgical microscopes and industrial measuring machines. An enlightening statistic about the $1.5 billion international organization shows that 30 percent of its sales are for products on the market less than three years, a fact that reflects the results of investing more than 10 percent of its revenues in research and development.

The quality reputation of Zeiss microscopes is evidenced by several benchmarks. First, its customers include every major hospital, research institute and industrial laboratory around the world. Second, Zeiss is the microscope brand cited most in biomedical research papers. “And third,” remarks Toplin, “Steven Spielberg used Zeiss microscopes as props in ‘Jurassic Park’ to give the movie’s laboratory scenes authenticity.”

In the medical area, the Zeiss equipment business originally consisted mainly of ophthalmic diagnostic instruments. Then in 1953, the company introduced the first surgical microscope. Now, Zeiss is the first name in microscopes for microsurgery in ophthalmology; neurosurgery; ear, nose and throat surgery; plastic and reconstructive surgery; and dental surgery. These products are imported through the Surgical Products Division, also in Thornwood.

In 1984, Carl Zeiss Optical, Inc., was established to meet the growing demand for consumer optical products. This division, now based in Chester, Va., imports and distributes German-made ophthalmic lens products, coating equipment, binoculars and rifle- scopes. In addition, the facility provides ophthalmic laboratories with services for the production and coating of premium lenses. The division is also engaged in alliances to develop and introduce new optical technologies.

Pinpoint Measures
In response to the increased customer demand for its world-renowned coordinated measuring machines (CMMs) in the United States, in 1984 the company purchased Numerex, a Minnesota manufacturer of industrial measuring machines. Renamed Carl Zeiss IMT Corporation, this division designs, manufactures and markets a variety of industrial metrology instruments, including bridge and horizontal-arm CMMs and form-roundness and surface-measurement instruments.

Chris Grow, director of marketing for the division, comments on the precision of these products: “We have instruments that can measure from 25 microns — a thousandth of an inch — in less demanding sheet-metal applications to our highest accuracy systems that provide submicron accuracy of 0.5 micron — 20 millionths of an inch.”

Operating in a 65,000 square-foot facility in Minneapolis, Carl Zeiss IMT produces and sells measuring machines to all major automobile and aerospace companies in the United States, and is the market leader in its field. This division employs more than 250 people and has technical centers in Brighton, Mich., Lake Forest, Calif., and Charlotte, N.C. Its continued market growth has spurred the construction of a larger manufacturing facility in Minneapolis to significantly increase production capacity. Measuring more than 85,000 square feet, the new building will include a state-of-the art customer and employee training center.

Sights on Entertainment
People around the world enjoy the benefits of Zeiss opticals in a variety of settings:
• A visit to a planetarium in 540 cities worldwide gives a view of the heavens via a Zeiss projector. Most recently, the Rose Center for Earth and Space in New York and the Chabot Space and Science Center in Oakland have become must-see destinations.
• An evening at the movies may involve a story filmed with Arriflex cameras, which use Zeiss lenses. In fact, Zeiss movie-lens technology has earned two technical Academy Awards, most recently for high-speed zoom lenses. Such lenses were used in filming “Shakespeare in Love,” the Best Picture award winner in 1999.
• A gallery opening may exhibit photographs made with a Contax, Hasselblad or Sony
camera — all of which use Zeiss lenses.

Clearly, Carl Zeiss, Inc., and its parent company are focused on quality, precision and innovation — and a clear view of the future with the highest measure of quality.