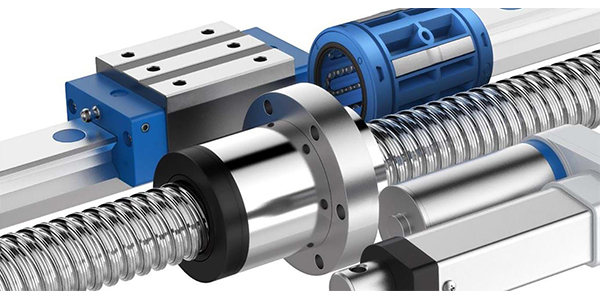 The SKF Group will commemorate its 100th anniversary in 2007 and holds an important position in the market for linear motion products, as well as high precision bearings and services for the machine tool industry. The Swedish company has 40,000 global employees, 100 manufacturing sites worldwide and sales companies in 70 countries, supported by 15,000 distributors and dealers. Lines of business now include actuation systems, ball and roller screws, high-performance cylinders, linear guiding and positioning systems, industrial products, high-precision bearings, spindles, machine tool service, and magnetic bearings.

TCM, formerly Twentieth Century Machine, a Michigan manufacturer of ground ball screws, was acquired in 2003. TCM has proved to be an essential contributor to SKF Group’s linear motion expertise. And the feeling is mutual as the merger has contributed to TCM’s performance, on-time delivery, competitiveness, and market reach.

“Our market share is looking better all the time because we are part of a large corporation. We have that horsepower behind us that is always needed and the marketing skills and sales group,” says Bud Hulewicz, manager of new business opportunities. “When we were purchased, SKF took us to the next level that a privately owned company has to go to for success in the future. For a company like this, when you are under international pressures, then become part of an international firm, you change and you migrate to a different level of business performance. We now have enhanced ourselves to be able to compete better throughout the U.S. and Canada and we have the strength of multiple product lines.” Purchasing power is also improved with the corporate tie-in, according to Hulewicz.

Ongoing quality control improvements including DIN ISO international standards along with improved production speed have also been the result of SKF’s influence on TCM. Quality and quantity are both better.

“We have a huge range of products,” Hulewicz says of the company’s precision ball screw assemblies. “Any place that linear-to-rotary or rotary-to-linear motion is required, that’s where they are primarily used.” Machine tools are obviously a huge market for the company as well as computers and electronics (such as controlling the slicing of wafer boards in electronic circuit production), aircraft and aerospace, nuclear applications, specialty equipment and automation equipment. Automotive applications include motion control for robotics and electromechanical cylinders that drive welding guns.

“We also have a precision ball screw repair service,” adds Business Manager Kyle G. Fedorcha. “Not only are we producing ball screws but we also have the ability to repair any ball screw made anywhere. It’s another piece we bring to the table. We are not a commodity. We bring a complete package to our customers.”

A Storied Past
TCM has been around since 1946 when the company was started through investments from the GI bill. It began as a specialty-manufacturing firm focused on deep well drilling operations. Some milestones include contributing parts for the lunar module and rotors for wind tunnels. Another claim to fame is TCM’s internal recirculation design for precision ball screw assemblies. The approach combines “gun drilling” know-how with more sophisticated recirculation of the ball bearings through a hardened return system. “There is no particular design like this in the world. It is extremely effective and durable so it has the ability to maintain high speeds,” Hulewicz explains.

In time the private company was ripe for takeover and SKF proved the right fit.

“It’s a highly competitive world, very price driven, and at the end of the day (customers) are not just getting a product, we’re developing a partnership with SKF,” notes Fedorcha.

“What has happened since the acquisition is we are now in a position to sell systems along with our products,” Hulewicz says. “Where in the past we just sold applied ball screws to applications, from a standpoint of strategy, we are now able to supply guidance systems, with bearings…screws, housing arrangements to go with them, so what we are doing is selling a whole linear system.”

TCM’s precision ball screw assemblies can be thought of simply as re-circulating angular contact ball bearings. The manufacturing facility is located in Armada (pronounced Are-MADE-a), Mich. The completely air-conditioned plant is designed to achieve precise international standards for linear tolerances. Products are typically made from chrome alloys and stainless steels. The high-tech facility has 26 thread grinding machines, each worth $1.5 million. Labs are tops in the nation. The company does its own induction and heat treating and has a highly trained workforce of about 100 people. SKF synergies add even more metallurgical knowledge.

“What SKF Group has also brought was the ability to modernize our thinking when it came to production and turned us to a ‘cell’ approach to manufacturing,” Hulewicz says. This new manufacturing approach is fast replacing assembly line design with separately managed cells of people and equipment designated to the manufacturing of different components.

The company’s brain trust includes three channel managers, a quality control expert, and a service manager each with more than 25 years’ experience.

“SKF prides itself on being the knowledge engineering company,” Fedorcha says. “We provide not only a highly specialized and engineered product but we also provide the services, support and technical know-how to follow.”

The Human Element
It turns out that great engineering stems from people and success follows. “Applying of the product is still key to sales,” Fedorcha says. “If you help your customer and partner with him in the very beginning of the application, this seems to be the key to success. Partnering is not just a word, it truly has to exist when it comes to today’s business.”

Too often, companies lose sight of this essential dynamic. “For some reason over the last 10 years we have tried to boil out the human element. But it’s still a very important part of business today,” Hulewicz observes. “SKF has that approach of helping your customer
from an application standpoint. When he’s on the ground floor of what he’s going to be doing, that’s where we are very effective.”

Engineering kicks in with TCM’s broad range of offerings. “What separates us from the competition is our extraordinarily wide range of products. We go from a few millimeters in diameter all the way up to six- and eight-inch diameter products that can be as long as 60 feet,” Hulewicz says. (Applications of that size might include a ball screw assembly to drive a very large machine tool or used on a military satellite dish.) “The TCM design is the most durable package built in the U.S. as far as integrity of life and strength.”

“You hear these terms and buzz words but it comes down to a team made up of all groups of people within an organization,” Hulewicz concludes. “We have an SKF flag and an American flag out front and people are proud that we are part of that worldwide organization. We know we have an American, Michigan company which is going to be stronger and stronger into the future.”

Through its SKF Group acquisition, the former Twentieth Century Machine, is in great shape for the 21st.