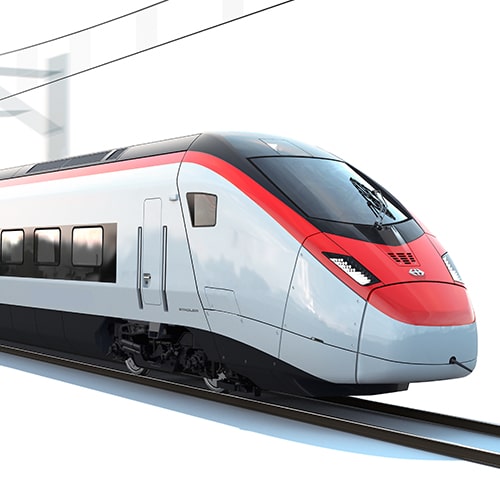 With predicted growth in the North American rail passenger market, Stadler Rail Group, the company whose trains crisscross Europe at speeds of up to 260 kilometers an hour, is hoping to expand its presence in the states through the opening of Stadler US Inc., which will service customers in the United States and support sales of all the Stadler products in North America.

It’s another in a long set of tracks to be laid for the group that has an impressive set of statistics to back up its locomotive power: Producing all passenger rail vehicles, from three cars to light rail to commuter rail, metro, and locomotive, the company has become a leading manufacturer of rail cars. Stadler leads the market with its EC250 train, which clocks in at 160 mph, (260 km per hour), selling more than 1,100 multiple units of these, equating to 6,000 cars, in more than 17 countries. That’s a lot of track.

Stadler was able to make inroads into the lucrative U.S. market in the selling of 20 GTW 2/6 DMU rail vehicles to New Jersey Transit for its Trenton/Camden route, which had been used exclusively as a freight route, a regional passenger traffic operation. Other contracts have followed, in San Francisco, Dallas and Austin.

Its sixth project in the states is for TexRail, a $100 million contract to supply eight of its well-built FLIRT3 trains, a deal that comes with a federal mandate that the company maintain a local presence, which is why Stadler will operate a temporary facility in Salt Lake City, Utah. But who knows if this could be the start of something more permanent stateside for the company – if, after conquering Europe, could there gold across the ocean?

Stadler US CEO Martin Ridder is guarded about the future, but excited that Stadler has furthered its long term commitment to North America, which is “to provide rail vehicles with state-of-the-art technology, Swiss precision and craftsmanship.”

Working on the Railroad

A privately owned company, the US$2.2 billion Stadler Rail was taken over by Peter Spuhler, who owns 83 percent of the group’s shares, in 1989. At the time the company was more than 65 years old and employed 18 people. Needless to say, notes Martin Ridder, Stadler US CEO, “the last 27 years tremendous growth rate. “We had the right product and the right team,” he says. “When Peter took over we began selling a lot of trains in Europe, and the industry evolved. We came into the U.S. market in 2002, with the project in New Jersey.”

The company has earned its fame as a system supplier of customer-specific solutions for rail vehicle construction, with locations in Switzerland (Altenrhein, Bussnang, Winterthur and Biel), in Germany (Berlin-Pankow, Berlin-Hohenschönhausen, Berlin-Reinickendorf and Velten), in Poland, in Hungary, in the Czech Republic, in Italy and in Algeria. The group is best-known for its GTW articulated multiple-unit trains, with 551 trains sold; the Regio-Shuttle RS1, with 495 trains sold; the FLIRT, with 656 trains sold; the double-decker multiple-unit train KISS, with 133 trains sold in the railway segment, and in the tram segment, the Variobahn, with 284 trains sold, and the newly developed Tango, with 101 trains sold. Stadler Rail also manufactures meter-gauge trains, passenger carriages and locomotives and is the world’s leading manufacturer of rack-and-pinion rail vehicles.

Other notable projects that have taken Stadler stateside include a contract with the San Francisco Bay Area Rapid Transit District (BART), which awarded a $58 million contract to Stadler Rail for the supply of eight GTW trains. The diesel multiple units based on the 37 trains that Stadler has delivered to Austin, Dallas and New Jersey in the last few years.

Stadler is known most for the design and manufacture of its bi-level FLIRT train, which can travel speeds of 100-200 km/hour and features level boarding and bi-level cars. With modular construction, each car meets strict standards for carbody lengths, floor heights and number of doors. Further, the interior of the FLIRT from the front to the rear end entrance is continuously accessible.

A renowned product in its FLIRT line is the EC250, the first high speed rail with level boarding, offering newest technology on the market. The EC250 is a high-speed, electric, multiple-unit train and is the world’s first single-decker, low-floor, high-speed train. The units operate with a top speed of 250 kilometers an hour and have a length of 200 meters (660 feet). They are to accommodate up to 400 passengers. In 2014, Stadler Rail won a tender to deliver 29 units by 2019, a US$1.1 billion contract to Swiss Federal Railways, with an option for up to 92 more.

“Our product has high reliability,” Ridder says, adding that “some of our trains from a price perspective, are not cheap. But in terms of how they’re built and their efficiency, we compete very well.” In addition, “We have very fast delivery times,” Ridder says, noting that the company can deliver one train within one year. “That’s a record,” he says.

Innovations, he says, come out of discussions with the customer. “We partner with our customers and share ideas. They present a challenge to us and we find a solution, that’s the driver for innovation.”

With such success under its belt, Stadler is engaged in a seventh U.S. project, which could involve the manufacturing of 16 cars to CalTrain in San Francisco.

To help its customers retain their locomotive movability, Stadler also offers a maintenance division, through which it is able to achieve a high availability rate of over 99 percent – that means that, on any given day, 99 percent of an operation’s rail cars are, well, operational. For a company that is accustomed to logging statistics that exceed both the market and customer expectations, that 99 percent is a figure worth noting – it means that everyone can move, landing Stadler on top of the rail industry and way ahead of its competition.

That spells plenty of motion for U.S. customers, as Ridder says, “We are looking to be able to be a part to deliver great technology and solutions to the U.S. market.”