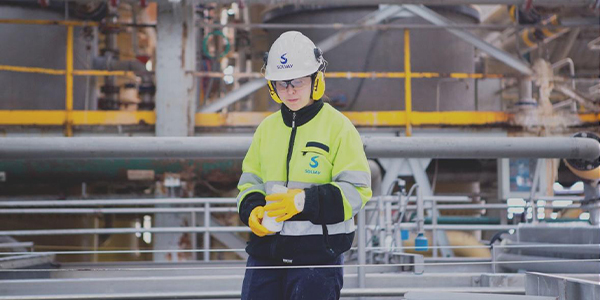 It would be hard to imagine a life without chemicals. Chemicals touch almost every aspect of our daily lives, from the toothpaste and shampoo we use, to the paint that goes on our walls, to our clothing, coffee cups, holiday ornaments and even those new flat screen TVs. Truth is, there isn’t much produced in our modern society that doesn’t contain chemicals or go through some chemical process.

The Solvay Group today is one of the world leaders in the field of chemicals. Its legacy dates back to 1863 with Solvay & Cie, headquartered in Brussels, Belgium, which remains one of the oldest chemical companies in the world. Ernest Solvay, the company’s founder, developed and patented the process for manufacturing synthetic soda ash, which enabled the modern-day industrialization of glassmaking for buildings and cars, and containers for food and beverages. A decade later, Solvay came to America, and helped start the nation’s first soda ash plant in Syracuse, N.Y.

Solvay remains the world leader in soda ash. Throughout its history, and in order to survive the volatility of the last 145 years (including two world wars) Solvay has consistently adapted to changing times. In 2003, Solvay Chemicals, Inc. was established, combining Solvay’s diverse North American chemical operations. The result was a streamlined business process across its chemical businesses and competitive synergies, creating a leaner and more efficient chemicals business. “Times have changed, and Solvay is changing with the times,” says President Dick Hogan. “Solvay is committed to its businesses for the long term, and has the innovative spirit and financial strength to remain viable for its customers, now and 100 years from now. Solvay Chemicals is geared for growth, through innovation, expansion, and commitment to customers.”

Salt of the Earth
The Solvay Group is known for soda ash. The company is number one in the world in the production of soda ash and the only company with a strong presence in both Europe and the United States. “What is unique is that Solvay has achieved and maintained the first position in the world for over140 years,” says Marc Nuchelmans, senior vice president, sodium products, for Solvay Chemicals.

Solvay is currently negotiating to purchase a soda ash plant in China. “The domestic market is relatively flat. Demand is about seven million tons, but there is no growth in the U.S. We are highly dependent on our export business, which represents about 40 percent of the total production in the U.S. Growth in world demand is driven by the growth in China. Soda ash demand in China is growing at a rate of 7-9 percent per year, and China is now the largest soda ash producing region in the world. We anticipate continued growth in Asia as well as the eastern European countries,” says Nuchelmans.

Creating SOLVAir(tm) Products
Trona is a growth engine for the sodium businesses because of the current Clean Air Act legislation, and the many deadlines that are imminent (2006, 2007 and beyond) for industry to implement air pollution control systems. Solvay has developed breakthrough technologies in its basic businesses that are solution driven. In this case, it’s the SOLVAir group. Its core group of five products helps remove sulfur oxides, hydrogen sulfide, nitrogen oxides, hydrochloric acid, hydrofluoric acid and heavy metals such as mercury from flue gas emissions. These products are used by industries as varied as glass, cement, waste incineration, gold and other precious metal refining, petroleum refining, pulp and paper, and electric power.

“The power industry hasn’t been highly regulated during its history. Now, oil refineries and other utilities are all under the gun to comply with the Clean Air Act,” says Michael Wood, business manager for the SOLVAir Group. “And it’s going to take chemicals to do it. What makes us unique is we can offer these companies several choices. SOLVAir has five products in its line. It’s a good core group and I can see us building off of this core and expanding the line as needed or adapting the core group to specific customers and situations,” he says.

With the significant number of oil refineries and power generation plants across the world, Solvay Chemicals sees considerable future growth for the SOLVAir product line. “It’s an extremely exciting time. What we anticipate is that, while current regulations are limited to 28 Northeastern states, these will most likely expand to the 48 contiguous states. This will produce a natural growth in the market for years to come,” says Wood. Solvay Chemicals has expanded its refined trona production capacity in Green River, Wyo., by 300 percent to ensure it will be able to meet the demand for product for clean air projects in the next seven to 10 years.

Growth Factor
Solvay Fluorides, the wholly owned subsidiary of Solvay Chemicals, also recently expanded its Catoosa, Okla. plant to meet demand for its NOCOLOK(r) brazing flux used by automotive heat exchanger manufacturers. “Catoosa’s state-of-the-art NOCOLOK brazing flux plant expanded capacity in 2002. NOCOLOK flux has a growing market in aluminum heat exchangers and radiators,” says Vance Erickson, senior vice president, Solvay Fluorides, LLC. The fluorides side of Solvay’s business is a growth area with profits up 15 percent. “We’ve seen all our major markets in NAFTA become quite strong. We’ve even been able to get prices up this year despite several years of tight downward price pressure.” Erickson also sees the automotive and refrigerants markets drawing interest in the next five to 10 years. “The big residential and commercial air conditioning manufacturers are being asked to comply with more stringent guidelines. We are the only U.S. producer of NOCOLOK so we’re in a good position to participate in that growth,” says Erickson.

Another area of growth for Solvay Chemicals is hydrogen peroxide. The Solvay high productivity peroxide process will be a primary feedstock to the new propylene oxide process announced by BASF for its Geismar, La., complex planned for 2009. Solvay’s new high-productivity process is able to inexpensively expand capacity by about 60 percent within the existing plant footprint. This will provide tremendous capacity leverage and very short project timeframes compared to new construction.

Responsible Care
Solvay has always acknowledged the importance of environmental responsibility, making reasonable use of the earth’s resources, and preserving species and natural habitats. “We hold the conviction that good corporate citizenship is the key to sustainable growth, and are constantly searching for responses to the community’s essential needs,” says Hogan. Solvay’s voluntary commitment to progress for sustainable development is expressed in concrete terms through the implementation of a “Responsible Care(r)” policy in every country in which the group has a presence. “The Responsible Care(r) initiative is a plan aimed at improving the management of chemicals by chemical manufacturers, distributors, transporters and customers,” explains William Barnes, vice president, human resources and HSE for Solvay Chemicals. “It involves extensive interaction with the public, and provides a framework for the chemical industry’s methods of operation.” Since its adoption, the Responsible Care(r) Codes of Management Practice have been the road map Solvay companies have used to assess their operations and make necessary improvements in health, safety and environmental performance.

As a member of the American Chemistry Council, Solvay America, the U.S. holding company of most of the North American operations of the Solvay Group, is committed to Responsible Care(r) and continues to emphasize responsible chemical management through leadership and participation in the program. In turn, Solvay Chemicals further supports the National Association of Chemical Distributors and its code of Responsible Distribution Practices. Solvay Chemicals is also active in its local communities. In Green River, Wyo., Solvay Chemicals maintains an ongoing interaction with the public through its involvement with the Southwest Wyoming Mutual Aid Association, as well as through its sponsorship of training sessions with the Local Emergency Planning Committee and the Sweetwater County Emergency Management Committee for firefighters and local mine rescue teams. “We see safety and environmental stewardship as integral parts of our business. These are not just add-on programs or policies. Our number one objective is to operate safely, to make sure everyone goes to work and returns home safely,” says Barnes. “We work very hard to prevent injury and strive for zero injuries, which is difficult to do in any industry. But as a significant player in the chemical industry, it’s simply the right thing to do.”