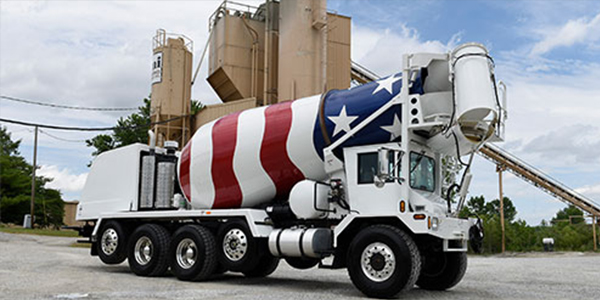 In our booming economy, few businesses can afford to wait to get a job done. Advance Mixer Inc. of Fort Wayne, Ind., understands this better than most in the industry. It built it’s first front-discharge concrete truck in 1972, increasing productivity and revolutionizing the industry.

Maximizing Productivity
Prior to the development of the front-discharge mixer, concrete was delivered on site using rear-discharge concrete trucks. “The driver must back the truck up to the pour and the contractor must have spotters on site, directing the driver to the location where the chute can discharge the concrete,” explains Paul Smith, director of marketing.

“The biggest benefit from using a front-discharge mixer is that the driver can sit in the cab and drive right up to where the concrete is being poured,” says Smith. “He has control from his driver’s seat where the chute extends and he can then start his pour right there from his seat.”

Because of the ease involved with a front-discharge mixer, ready-mix concrete companies can expect at least one extra load a day over what can be accomplished with a conventional rear-discharge mixer. When you compute the math, this extra load per day means greater year-end profits.

Maximizing Ease of Use
Advance designs and manufactures front-discharge mixers in a variety of configurations based on the requirements of the state in which the trucks will work. “We build three-, four-, five-, six- and seven-axle trucks,” says Paul Ellingen, vice president of mixer sales. The state weight restrictions mandate that drivers can carry only a certain amount of weight on each axle.

“Through the years, the ready-mix producers have had difficulty finding drivers to drive their trucks,” explains Ellingen. “We’ve made it easier for them by offering automatic transmissions, whereas the rear-discharge trucks are manufactured mainly with manual transmissions.”

All-wheel drive capabilities combined with Advance’s short wheelbase all add up to better maneuverability, both on and off the road. “It takes less space to turn our trucks because of the short wheel base and this is a real benefit in construction areas,” says Ellingen. “Our payload capabilities and our short wheel bases are two of the more important features and benefits that distinguish us in the industry.”

“Our Advance seven-axle mixer has a 10-yard payload that conforms to the federal bridge formula, which is enforced in several states,” says Ellingen. This mixer truck is gaining in popularity. Ready-mix concrete producers in states including North Carolina, Arizona, Nevada, Utah, Idaho, Montana, Wyoming, and Ohio are already enjoying the benefits of these trucks.

Advance(ing) a Boom Market
Advance plans to grow its newest product line to the stature of its mixer trucks. “Our concrete boom pump is another means of delivering concrete on site. The mixer will deliver concrete to the site by pouring concrete into a hopper on the pump,” explains Tom Buscaglia, national sales manager for the pump division. “It has a long unfolding boom that can place the concrete in difficult-to-reach places such as multifloor buildings.” These boom pumps are available in lengths of 28 meters to 47 meters.

“We got into the boom-pump business because we thought that was the next step for us,” says Buscaglia. “Now we are the only company offering both mixers and boom pumps. We believe we are ahead of our competitors because we already have such good relationships with the ready-mix producers, and now we can offer them the boom pumps.”

www.advancemixer.com
The company’s after-market business accounts for its third market segment. “We feel there is a lot of opportunity here,” says Dave Byerley, service parts manager. Advance sells after-market parts, provides repairs and is beginning to sell parts online. Byerley says, “We will try to use our Web site as a key tool in our marketing endeavors. The site will also make it easy for our clients nationwide to order parts.”

Advance’s broad customer base is located primarily in the Northeast and central part of the country. “We expect another record year in total truck sales and we anticipate further growth in the Southeast and Southwest,” says Ron Manz, chief operating officer.

Utilizing lean manufacturing in its 180,000 square-foot facility employing 300, Advance strives to produce quality while keeping costs down. It encourages a self-management concept that allows employees to progress as far as they are able. “We push responsibility downward to allow us to grow people internally,” says Manz. “This management style also allows us flexibility in that people can work in other departments and in other capacities throughout the company because of the skills our employees develop. So each person is worth more to our company.”