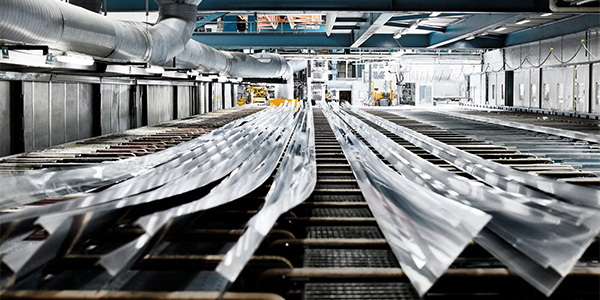 When you think of great American landmarks, the first two that probably come to mind are the Statue of Liberty and the Washington Monument. And when the federal government needed to do a major overhaul of those two popular tourist attractions, it turned for help to a great American company, New Jersey-based Aluminum Shapes LLC.

Several years ago, Aluminum Shapes was awarded a $1 million contract to supply all the scaffolding for the renovation project, a job so massive that it landed the firm a mention in the Guinness Book of World Records.

So it was only natural that Aluminum Shapes was sought out for a similar overhaul of the Washington Monument in 1999, when the government needed roughly 500,000 pounds of scaffolding in a short period of time. Workers at the company’s main site in Pennsauken, N.J., near Philadelphia, extruded, fabricated and assembled all the scaffolding in just eight weeks.

Mike John, the national sales manager for Aluminum Shapes, said the roughly half-century-old company’s groundbreaking work on the renovation projects is just another example of how the company aggressively seeks out new customers and new types of work.

Roots in the 1950s
“We continue to look for new markets, for new applications for aluminum extrusion, and for new and improved ways to manufacture our existing product,” John said. In a competitive marketplace, he also noted that Aluminum Shapes employs the latest lean manufacturing techniques to assure that these markets can be reached most competitively and with the utmost quality control.

Although Aluminum Shapes is a relatively quiet company, you have undoubtedly seen its handiwork, most any time you pass a large tractor trailer on the interstate or see a long freight train pass by.

Ironically, the company got its start in Philadelphia in 1954 by assembling windows and doors, as the city underwent a home building boom with veterans returning to the area after World War II. The company’s founder, a businessman named Ben Corson, saw opportunities in the relatively new field of aluminum extrusion, and so in 1957 he took his small firm of 25 employees across the Delaware River to Pennsauken, N.J., and set up his new shop.

Workers at the large New Jersey factory make product there by pushing hot aluminum billets through dies to produce profiles for a variety of applications, including truck trailers, railcars, scaffolding, and a variety of architectural applications.

Tremendous Capabilities “Under One Roof”
Early in the 1960s, Aluminum Shapes cemented a relationship with Chicago-based Great Dane Trailers, one of the nation’s leading suppliers of truck trailers. Aluminum Shapes also manufactures trailers for U-Haul and virtually every other leading American manufacturer of trailers and truck bodies.

John said that the transportation business – which includes both the truck trailer and rail cars – continues to make up about 40 percent of the business for Aluminum Shapes today. “The transportation industry has been going crazy after a significant three-and-a-half year downturn,” John said. Not only has production increased dramatically for over-the-road vehicles, but Aluminum Shapes is seeing a significant increase in orders for the production of railcars according to John. Aluminum remains an attractive choice for these types of applications because of its strength relative to its weight. “When faced with weight limitations for over-the-road hauling or the additional utility cost of moving a heavier load, manufacturers of trucks and railcars turn to aluminum,” John added.

In 1995, the company added a major new piece of equipment, a 6,500-metric-ton Danieli press that can manufacture shapes up to a 24-inch-wide circle size with weights of up to 40 pounds per foot. The extrusion press is still one of the largest of its kind in the nation. Aluminum Shapes operates seven other extrusion presses, utilizing billets from seven inches to 16 inches in diameter. With this range in press sizes, Aluminum Shapes can produce all the profile sizes needed by its customer base.

Additionally, the company can paint, anodize and fabricate the profiles, all at its 1.5 million square foot facility in South Jersey. As a full service provider, Aluminum Shapes can compete with even the largest competitors, who have plants throughout the country, but do not necessarily have all the capabilities under one roof.

“It is far more economical for customers to take delivery of a finished part,” John explained. “Without having to deal with multiple vendors, or having to move product throughout their own facility, our customers can receive a finished, fabricated part at their assembly line ready for production. They consider this a process improvement and a quality improvement.”

The result has been an evolving mix of business for Aluminum Shapes whereby a much larger percentage of profiles are being shipped after being finished and fabricated.

Other Markets
Ten years ago, Aluminum Shapes ventured for the first time into the distribution portion of the market for aluminum-extruded products. To service this market, Aluminum Shapes produces both standard shapes and custom shapes which are sold through large distributors to machine shops and other OEM manufacturers. Today, this represents about 35 percent of Aluminum Shapes’ business, John estimated. The company rounds out its business by servicing the construction industry, automotive industry, electrical distribution industry and defense industries, to name a few.

As for foreign competition, John noted that “we are definitely in a more global arena. However, the weight of some of the items that we produce, our skilled labor force and the short lead-times demanded by our customer base act as something of a bulwark against imports”.

As a private, family owned business with all owners and executives located in Pennsauken, Aluminum Shapes can respond to market conditions rather rapidly. “Whether we need to decide to spend money on a capital improvement, to reach out to a new market or to hire additional employees (150 of which were added in the last 18 months), those decisions can be made rapidly. “We will remain lean, efficient, responsive and customerfocused,”stated John.

The company’s forward strategy should ensure a prosperous second half-century. The company that helped restore the Statue of Liberty and the Washington Monument is something of a national treasure itself.