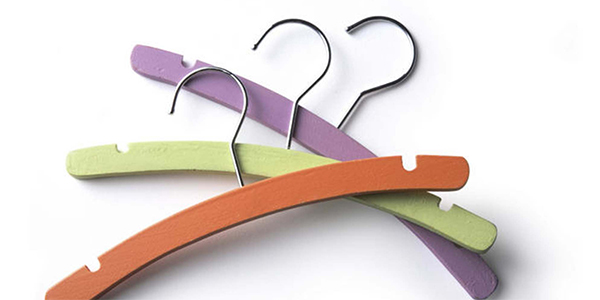 It probably would never occur to you that buying the right type of hanger could save leading retailers millions of dollars every year. But then, you’re probably not Stanley Gouldson, the Australian marketing inventor whose patented hangers have helped Spotless Plastics, the American-based unit of a large Australian company, grow from a tiny regional supplier on Long Island to a global leader in its field.

It was Gouldson and his co-workers at Spotless Plastics who came up with an idea that revolutionized the industry – plastic hangers displaying the size of the garment on the top of the hook. It seems like a small change, but it allowed shoppers to save valuable time that was once squandered while they checked under collars or inside waistbands in search of an item in their size. “We have developed products that allowed retailers to save valuable floor space – and the colored size indicators further increased their sales,” said Gouldson, who is the Executive Vice President of Marketing of Spotless Plastics USA. And it accomplished something else, since the now needless practice of taking garments off the hanger to check for the size often inadvertently led to damage. “This all but eliminated garment damage,” the marketing inventor added.

Aussie roots
Indeed, that innovation alone would have probably been enough to build a successful business. However, Spotless Plastics has also developed a one-of-a-kind system for recycling and reusing hangers, as well as introducing new, patented hangers for items such as pants and skirts.

The company’s knack for innovation goes back more than a half-century. It was 1952 when an entrepreneur named Ian McMullin and his brother Bruce opened up a small dry-cleaning shop in the Australian city of Melbourne that eventually grew to be the nation’s leading dry cleaner. Later under the fine stewardship of Brian Blythe (Spotless Group Ltd., Managing Director – now Chairman), Spotless expanded into commercial dry cleaning, through the acquisition of a large industrial cleaning firm called Ensign. “This new services division headed by Peter Wilson (who later became the CEO of Spotless USA and is now managing director of Spotless Group Ltd.) developed garment rental programs with the motor vehicle industry, colleges and grammar schools, mining companies and the like,” Gouldson said. Over this time Spotless hanger business, which was originally developed to support its chain of dry cleaners, quietly continued to develop the hanger business with leading Australian retailers and garment manufacturers. “By 1986, we had gone as far as we could go in Australia” Gouldson said. “We had a very strong position, so it was a choice of whether to move into other plastic products and or markets or to take our unique concept overseas, so we started exploring the United States and Europe.”

In 1987, Spotless officials set their sights on a small hanger firm based in Deer Park, Long Island., called Plasti-Form Enterprises Inc. At the time of the purchase, Plasti-Form was generating some $5 million in annual revenues, a figure that would increase some 20-fold under the new management. “The company, Plasti-Form, had a good Intimate Apparel hanger business supported by patents,” Gouldson said. The decision was made to expand the company’s reach into the retail, mass-market arena. Initially, in the late 1980s, Spotless Plastics was selling to Sears and Kmart, but gradually it started doing business with Wal-Mart, which was on its way to becoming the world’s largest retailer. Gouldson said the hanger with top size-indicators was key.

Saving time
“Often the motivation for sales isn’t money – it’s finding the garment,” Gouldson said. He said that as mass retailers offered clothing but without a large staff, the key factor in sales became saving time for working mothers who were often shopping on their lunch break or on the way home from work. “Now they could go to the garment rack, see the size they want and pull it out.”

Gouldson, who has developed numerous hanger patents and designs himself, has worked on other unique devices with the similar goal of helping retailers save valuable floor space, and as a result, money, while making shopping easier. But product design isn’t the only area in which Spotless Plastics has been a leader. As the international clothing industry has grown and expanded over the last 15 years, the firm has sought to move with it. Today, Spotless Plastics has facilities in more than 24 countries – wherever the garment industry is flourishing. The list includes: Bangladesh, China, India, Hong Kong, Honduras, Korea, Mexico, Singapore, Malaysia, Taiwan, Thailand and UK. Said Gouldson, “In many countries we have more than one location.”

But not all of the hangers purchased from Spotless Plastics are newly manufactured. Indeed, Gouldson is most proud of the company’s aggressive recycling and re-use program. Initially working with Target, Spotless Plastics developed what it calls a “closed-loop hanger program” to remove hangers at the retailer’s point-of-sale, ship them to Spotless Re-Use centers located in North Carolina and California for reconditioning and redistributing back to the clothing manufacturers who in turn use with garment deliveries to retailers. “So we’re an environmentally friendly company as well,” Gouldson said, noting that the program has created hundreds of jobs in the United States even as an increasing amount of garment work is outsourced overseas. Gouldson said he believes Spotless Plastics is now the largest re-user of plastic hangers in the world, employing roughly 600 people here in the United States.

In early 2001, the company again expanded rapidly, this time into the European market with the acquisition of leading British based hanger and retail packaging company Braitrim. At the time, company officials predicted that the move would double its reach and its sales. Braitrim (now headed by Steven Davidson) provides hanger and retail packaging services to leading European retailers, such as; Marks & Spencer, Tesco, C&A and H&M. At the time, part of the rationale for the acquisition was that Spotless was planning a move into what is known as the “commodity” end of the hanger market, which would involve selling plain hangers through large discount retailers. Analysts have noted that such a move would greatly increase the unit’s revenues, although the product generally has a lower profit margin.

Ironically, however, Gouldson said the company’s main source of growth may come as leading American and European retailers expand into new world global markets. He said the company continues to increase its ties with leading retailers and as a result expects Spotless to become the market leader in the hanger industry within a few years.

The most amazing part is the way that Spotless Plastics has reached that goal – as a quiet creative player in a rarely noticed industry.