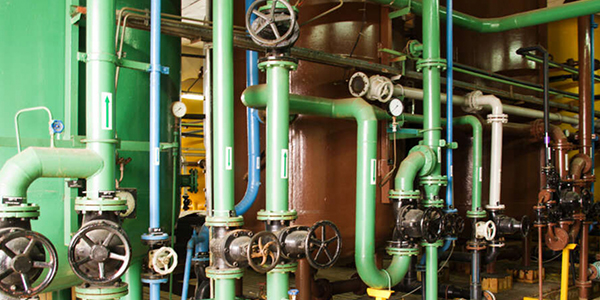 Maybe it would be best
to begin with what ChemTreat, Inc., cannot do: It cannot make the water. But in industrial and commercial applications, it can sure make water cleaner and more usable. And that amounts to lots of savings for the companies that benefit from ChemTreat’s applied technology in the field of water treatment.

ChemTreat is the nation’s largest independent firm dedicated to industrial water treatment, with nearly 500 employees working throughout North and South America, the Caribbean and some areas of the Asia-Pacific region. The company fosters an entrepreneurial spirit among its employee-owners, which helps not only in driving the company’s success but also carries over into successful programs in each customer’s facility. As a company statement attests: “We help our customers save millions of dollars every year, enabling us to achieve unparalleled growth in the water-treatment industry.”

A Better Way
ChemTreat was founded in 1968 by Harrison Tyler, an engineer for the Mobil Chemical Company. Tyler had assisted in the startup of Mobil’s phosphate complex in Ohio, and had been disappointed with the competency and service provided by the water-treatment company selected to treat the system. Facing a transfer that would take him still further away from his home base in Virginia, he opted instead to start a water-treatment company in Virginia to serve customers there and in the Carolinas. Within six months, he had found a partner — Bill Simmons, another Mobil Chemical expatriate — and as they say, the rest is history. Their 30-year venture culminated with the sale of 85 percent of the business in December 2000 to the employees’ ESOP (employee stock ownership plan).

Over the past three decades the company has enjoyed continuous growth. With $116 million in 2001 sales, ChemTreat now is the largest U.S. company dedicated solely to industrial water treatment. Its corporate headquarters are in Richmond, Va., and it has manufacturing plants in Virginia, Texas, Iowa and California, as well as warehouses in Mexico, Canada, Venezuela and Panama. ChemTreat has consistently been the fastest-growing major company in the industry, with a growth rate two to three times that of its industry competitors, or 13.8 percent vs. less than 5 percent. ChemTreat has the lowest customer attrition rate in the industry and the most experienced field sales force, with an average of 16 years experience, three to four times that of its competitors. ChemTreat has the fastest order turnaround time in the industry; 90 percent of its orders are shipped within 48 hours of order receipt vs. seven to 14 days for the competition. The company has the most favorable ratio of corporate support personnel to field sales engineers and the lowest employee turnover rate in the industry. Among other services, it boasts the fastest turnaround time for laboratory analysis in the industry.

Pipeline to Purity
There are four major branches of water treatment in which ChemTreat specializes for large-scale industrial and commercial applications: cooling water, its top business; boiler water; wastewater treatment; and pretreatment makeup water (the process of bringing new water into the manufacturing operation). As a result of environmental issues, Dowd explains, companies have been forced to rely increasingly on the recirculating of process water over the past 30 years, thus creating the need for efficient, tightly controlled systems. What occurs during the process of water recycling, Dowd explains, is that impurities are concentrated by the evaporation/loss of water (in a boiler, for example). These impurities act to corrode or scale up the pipes that carry the recirculating water. “Our chemicals are used to control those conditions at both ends of the spectrum,” Dowd explains, “to maximize efficiency and extend the life of the system.”

Basically, there are different families of chemicals used for each branch of water treatment, although the foundations of the chemical compositions remain the same. In the area of wastewater treatment, for instance, Dowd says the need is to ensure that the water discharged from a facility does not exceed the allowable amount of contaminants as established by Environmental Protection Agency guidelines and state and local discharge permits.

To achieve its goals, the company employs a significant research and development effort, with an emphasis on development. “We tend to design products for specific applications,” says Dowd. “If a major customer has a problem, we’ll tweak the existing products to solve the problem.”

To keep industrial water sites running at peak efficiency, ChemTreat has developed several unique programs. These include:
• Quadrasperse: a family of products employing “quadpolymers,” which produce high-performance deposit control in severe-service industrial cooling water systems
• ChemTreat Solutions: a technology whereby data is collected and fed into a computer, which then automatically controls/regulates the metering of chemicals from an automatic pump —resulting in an exact dose of chemical to treat a problem and enabling a system to stay under control
• Actives Based Monitoring: a system that directly measures treatment components, providing extremely accurate, real-time process indicators; and resulting in the fine-gain control of treatment parameters.

Natural Business
ChemTreat traditionally has shunned acquisition, preferring to grow internally and organically. Locating new markets has occupied the company’s strategy — which is why, three years ago, ChemTreat decided to broaden its business into an international base. “We had inquiries from existing companies to take care of their foreign operations, which induced us to start businesses in the balance of the Western Hemisphere,” Dowd explains. This expansion now forms the core of ChemTreat’s business plan as it branches out more into South America and the Caribbean. “They’re using the same equipment,” Dowd says, “but the level of applied water treatment technology in these countries has lagged behind.”

ChemTreat believes that the mechanical and engineering aspects of customers’ systems are just as important as their water chemistry. Thus it conducts a comprehensive survey of the client’s system, and its engineers visit the site, analyze the plant’s entire operation and work to understand all of the production processes. The company consults with operations, engineering, procurement and management personnel to determine special needs and requirements. It then develops a program outline that includes drawings and diagrams of every water-related system in the plant. Using the collected data, ChemTreat’s team develops workable solutions to all process-water and related problems. ChemTreat representatives then meet with the client to present a formal plan.

The company’s hallmark is its employee-ownership philosophy. ChemTreat is the largest privately held water-treatment company in the United States. It also has set its sights on being a major player in the global water treatment marketplace. “We think our cornerstone of success is being employee-owned,” says Dowd. “We consider ourselves a sales organization, and we focus on making our field sales force a success. We’ve created an organization that allows our sales force to act as entrepreneurs, and yet gives them the resources they need to grow and flourish in their own territories.”

The result is a stable company in which there is no conflict of interest between the shareholders and the employees — because they’re one and the same.