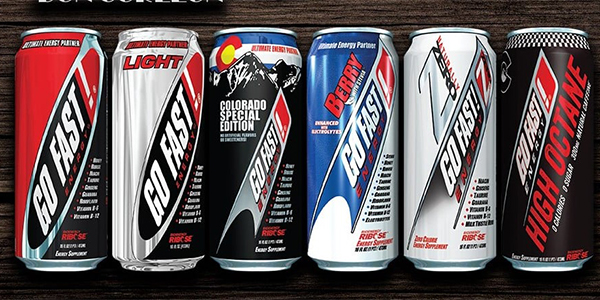 Go fast, be first to market. That seems to be the motto of the young professionals at the hip, competitive and cutting-edge company known as Go Fast. Led by world-class skydiver and self-admitted adrenaline junkie, Troy Widgery, Go Fast employees are actual extreme sports athletes and enthusiasts. Not surprisingly, the team has been ranked one of Beverage Industry Magazine’s Top 100 Companies for the past two years.

After all, you’d have to be a little pumped up (and young) to take on the energy drink market. It’s the fastest growing segment in the non-alcoholic beverage industry. With an 800 percent growth rate between 2000 and 2005, the market continues to explode. Go Fast is responding by offering Go Fast for athletes and for the mainstream population needing a boost to support their high-energy lifestyle. With premium ingredients, a great taste, and strong functionality benefits, Go Fast is quickly becoming the energy drink of choice for a broad range of consumers.

Back from the Brink

To truly appreciate the current success of Go Fast, you have to know a bit about its founder. Just four years before he started the company, Troy Widgery was in an airplane along with his world-class competitive skydiving team, Airmoves. The team was training for the U.S. Skydiving Championship and had high expectations of winning the upcoming championship. Then, during a training session in California, their skydiving plane crashed. Sixteen of Widgery’s teammates were killed. He was left with a broken collarbone, a broken back and hip, and rescuers on the scene thought his jugular had been severed because he was bleeding so severely. Widgery was one of only six who survived.

Still going fast after his accident, Troy Widgery continued his work with skydiving teams, and started the company Go Fast Sports to represent the lifestyle he and numerous sports enthusiasts live. “The crash did make me have more of a respect for life and I turned some of my focus to building Go Fast rather than jumping full-time,” says Widgery.

Go Fast Sports actually started as an apparel line in 1996 to provide extreme lifestyle sporting apparel to its customers. Company head Widgery was noticing the growing popularity of energy drinks at the time but also saw a gap in the market. ” I saw what was out there and knew that I could do better.so I did.”

Go Fast wanted to develop an energy drink that was not only good, but good for you. They enlisted the top energy drink chemist and noted athletes and took two solid years to come up with the initial formula. In 2001, Go Fast Energy Drink was unveiled.

Athletes and consumers alike responded favorably. Go Fast boasts a “more sustained energy boost without the jittery crash” associated with other energy drinks. In addition, it offers premium ingredients including Australian honey (rather than high fructose corn syrup), B-Vitamins, taurine, ribose and an herbal blend to provide a smoother, cleaner taste and a healthier energy drink alternative. “There are absolutely no preservatives, no high fructose corn syrup and no aspartame in our product,” assures Widgery. And the drink tastes great too. Just this year Go Fast was awarded the Gold Medal Taste Award for superior tasting energy drink by the American Academy of Taste. The beverage went up against major energy drink brands including Red Bull.

Go Fast Light was launched soon after in response to the need for a no sugar energy drink. Made with Splendar rather than aspartame, Go Fast Light is marketed to active lifestyle health-conscious consumers, and more particularly women, looking for a lighter version of Go Fast.

The Go Fast brand appeals to people who have a passion for living life a little on the edge, and the products speak to its audience’s adventurous attitude. Go Fast users tend to be energetic and edgy, typically 18 to 24, and high adrenaline sports minded users.

In 2004 Go Fast introduced a new 11.9-ounce size in response to the growing need for a large size can that wasn’t “too large.” “The 11.9-ounce size can accentuates our leadership role within the beverage market as we were the first energy drink to produce this can size,” says Widgery. Other energy drink manufacturers are now copying the size.

Go Fast was also first in the industry to come out with laser-etched “Go Fast” tabs on its cans. ” This new technology demonstrates the exceptional attention to detail, foresight to promotional opportunities and Go Fast’s ability to connect with consumer from the moment they open the can,” says Widgery.Go Fast’s “Camo Can,” introduced in January 2005 was also a victory. “No one could figure out how to get the camouflage pattern to print on the can because from a printing standpoint it required so many colors and you can usually only print six colors on a can,” explains Widgery. Go Fast’s innovative team found a way to make the can look like 14-colors and created the popular Camo Can.

But Go Fast’s marketing and branding efforts don’t stop there. It also has it’s own rocket. The Go Fast rocket, created in conjunction with Connecticut-based Fuscient, the Civilian Space eXploration Team (CSXT), went into space at 4,000 miles per hour with three cans of Go Fast on board. Additionally, Go Fast athletes have jumped using the smallest parachute and skydived faster than anyone else (300 plus miles an hour) to promote the Go Fast brand.

The company’s latest gizmo is the Go Fast Jet Pack. “I’ve been fascinated with these things ever since I first saw one in the James Bond movie, Thunderball,” says Widgery. The first privately funded rocketbelt, Go Fast’s is lighter, faster, and able to go farther than any Jet Pack created to date. “The Go Fast Jet Pack compliments Go Fast Energy Drink and is another example of our dedication to doing things better, differently and staying true to the Go Fast lifestyle and culture.”

With a great product, more energy beverages in the works and branding opportunities abounding, Go Fast is pleased with the niche it’s built in the marketplace. “We are not a corporate giant. And we are not one of the many new brands that likely won’t make it. We are a real brand, with an established foundation built on passion and integrity,” says Widgery. “So many companies say that about their products but in this case, it is absolutely true. We have and will continue to keep our focus on quality and maintaining consumer belief in the name we have built. ”

Now Widgery’s goal is to reach more folks who want to “go fast.” “We originally had our sights set on reaching extreme athletes but as we grow, we have realized that anyone living a fast paced life can appreciate and benefit from Go Fast Energy Drink. Business professionals and parents chasing kids could use Go Fast just as much as an athlete, if not more. Now it’s our job to reach those consumers.”