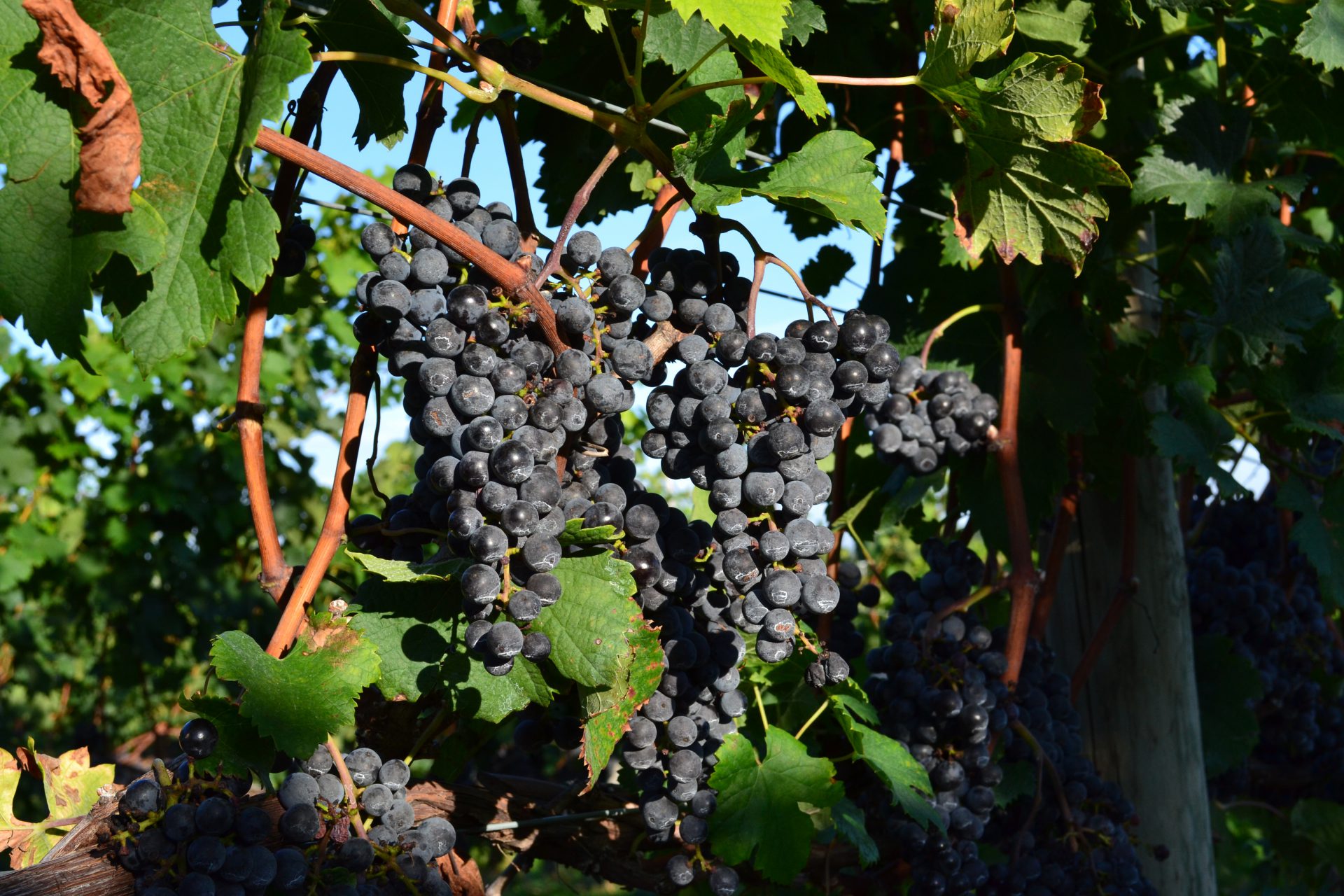 What comes to mind when picturing Michigan industry? Is it Detroit, with its sleek automotive assembly lines and acreage of concrete car lots? Perhaps the craftmanship of Grand Rapids’ historic furniture industry that transforms in artistry, style and production throughout the years. Outdoor recreation is a thriving industry, which is bound to happen when the state boasts two peninsular land masses surrounded by the largest volume of fresh water in the world.

Michigan is also known for its abundant agricultural sector, which is second only to California in terms of diversity produced. The Great Lakes State is first in the nation for production of tart cherries and many dried beans, and is second in production of asparagus, carrots, celery and squash.

Lesser known is Michigan’s production of wine grapes. In fact, the state ranks 5th in the nation for wine grape production with 3,000 acres of wine grapes yielding $14 million at the farm gate. In 2016, more than 2.4 million gallons of wine were produced in Michigan, increasing 34 percent in the last 5 years. Since the 1980s Michigan has seen the number of wineries increase from 12 to 130, with the majority of the expansion happening in the last decade.

What is it about Michigan that makes the state home to these diverse industries? What breeds the innovation, the imagination, and the penchant for a hard day’s work? Is it the water? Is it the geographic isolation?

Michigan is a northern state with a propensity for climatic drama. It is often said, “Don’t like the weather in Michigan? Wait five minutes.” This is largely due to the Great Lakes, expansive inland seas carrying 6 quadrillion gallons of fresh water.

Lake Michigan borders the western side of Michigan’s Lower Peninsula and the southern coasts of the Upper Peninsula. This lake is the primary reason for the state’s ability to grow the world’s most sought-after grape varieties, including Riesling, Pinot Noir, Chardonnay, Cabernet Franc, Merlot and Sauvignon Blanc. These grapes are classified as vitis vinifera, and are known as the old-world style grapes that have been cultivated and used for winemaking for thousands of years across Europe and Mediterranean regions.

The giant lake moderates the climate along the coastline. Over the winter, the lake temperature drops, and prevailing westerlies send cooling breezes eastward, preventing tender buds from breaking too soon and falling to a late spring frost. In the fall, the lake helps to extend the growing season by holding warmth and giving the grapes a few extra days to ripen. The majority of Michigan’s vinifera grapes are grown within 25 miles of Lake Michigan’s coastline.

Consider the other wine growing regions of the world. Many of them are located just east of a large body of water. Interestingly, Michigan has something else in common with other notable winemaking regions – part of the state lies on the 45th parallel, same as Washington state, Italy and France.

There are five regions in the state that are federally recognized as American Viticultural Areas (AVA). Four of them are located near Michigan’s western coastline. The most recent AVA to be recognized is Tip of the Mitt, which encompasses the northern tip of the state’s Lower Peninsula. Although much of the state’s production comes from these five regions, it is hard to travel anywhere in Michigan and be far from a winery. There is a concentration of lovely wineries in southeast Michigan, as well as in the state’s eastern “Thumb” region. The Upper Peninsula even holds a handful of wineries, a true labor of love for the farmers that far north. These wine grape growing regions primarily rely on hybrid grapes which have been developed to be more cold-tolerant.

Clearly the landscape has something to do with Michigan’s success as an industry, and it’s not just about production. The areas of the state that are growing grapes are regarded as some of the most beautiful tourist destinations in the midwestern United States. When travelling to and through Michigan wine country, out of state visitors marvel at the rolling green hills, sandy beaches, lush forests and of course, breathtaking lakes.

Tourism in Michigan is a thriving industry, and the state’s wineries welcome more than 2 million visitors into their tasting rooms each year. The majority of wine tourism traffic occurs in the Northwest and Southwest regions of the state, with the areas seeing a great deal of traffic from neighboring Ohio, Indiana, Illinois and Canada. In fact, a trip to the Lake Michigan Shore Wine Trail in Southwest Michigan is less than a twohour trip for residents of Chicago.

Traverse City sits in the northwest corner of the Lower Peninsula, at the vortex of two bays and two mini-peninsulas; Leelanau Peninsula and Old Mission Peninsula. These two peninsulas are both federally recognized AVAs and together are home to over 50 wineries. In addition to a proclivity for well- balanced white wines, the area is known for its beauty and thriving restaurant scene. Traverse City was recently voted “Best Midwestern Town” by Midwest Living Magazine.

In 1985, when the Michigan Grape and Wine Industry Council (MGWIC) was established within the Department of Agriculture, the organization represented 12 wineries. In order to be eligible for promotion by MGWIC, a winery must use majority Michigan grown fruit in the production of wines and ciders.

Now in 2017, that number has risen to 130 wineries, with 5-10 wineries expected to be added each year. Many of the wineries in Michigan are adding tasting rooms, planting additional acreage and making substantial investments in their facilities.

Mackinaw Trail Winery has its roots in Michigan’s Upper Peninsula, but the business decided to invest south of the famous Mackinac Bridge near the beautiful city of Petoskey. They recently added 3,600 square feet to their production facility and added 25,000 gallons of tank space in addition to planting more vines. Their investment in acreage and production equipment has allowed them to become one of the largest producers of wine in northern Michigan, certainly largest in the newly established Tip of the Mitt AVA. Despite all the investment and winemaking accolades, if you ask co-owner and winemaker Dustin Stabile what the secret to their success is, he answers “customer service,” without batting an eye.

One of the attributing factors to the growth of the industry must be the sense of camaraderie in the industry members themselves. Oftentimes, the wineries qualify both as family farms and small businesses, which seems to have an effect on the way they treat one another. Established winemakers and winery owners often take fledgling wineries and grape growers under their wings, providing mentorship and sound business advice whenever possible. Grape grower socials and clubs take place regionally around the state, and most of the wineries participate in their local “wine trails” – non-profit cooperative organizations created to help market the wine region.

Michigan winemakers are optimistic about the future of the industry. The state is just starting to celebrate the release of white and rosé wines from 2016’s illustrious bumper crop of gorgeous fruit. Red wines are expected to unveil closer to the end of the year.

There is a renewed energy among industry members with the creation of a new statewide non-profit, the Michigan Wine Collaborative, which seeks to enhance the sustainability and profitability of the Michigan wine industry by supporting wineries, growers and other businesses and individuals connected to the industry – today and for future generations.

“We created a geographically and functionally diverse board and open membership structure to represent Michigan’s wine industry today and in the future,“ said Dave Miller, board president and owner/winemaker at White Pine Winery. “Our goal is to support the interests of our industry from vineyard to bottle and onto the consumers’ table. The Michigan wine industry is growing rapidly and is at a point where an organization of industry representatives is required to guide and support research, education, marketing and legislative action.”

The foundation of the Michigan wine industry is framed in by the hard work, skill and dedication of cooperative business owners. Their individual efforts have resulted in numerous awards won in international wine competitions, and together the industry has garnered loyal support from many Michiganders and Chicagoans. It is fascinating to watch the industry grow as the rest of the world is let in on the secret.

Jenelle coordinates promotional activities for the Michigan Grape & Wine Industry Council, including marketing, communications, social media and special events. She has a B.A. in sociocultural anthropology from Michigan State University and a professional background in agriculturally based non-profit work.