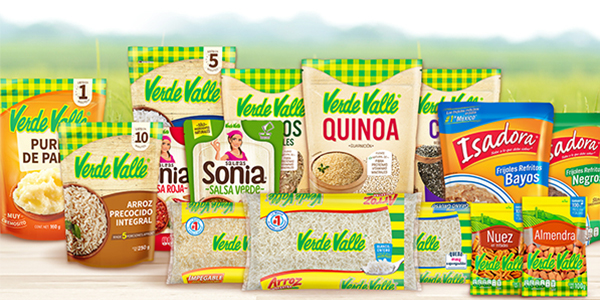 However, nomenclature is more than just a branding strategy. It reflects a reality, as the company works directly with farmers. Verde Valle is Mexico’s largest packager of dried beans and rice products for supermarkets and smaller grocery stores, and in cultivating its product line, the company goes right to the source – the actual food crops. That is, company representatives talk face-to-face with farmers, and their feet actually touch fertile soil. As a result, Verde Valle packages a fresh harvest into each bag.

“Our main value to our consumers is that we try and provide the best quality product possible, and that has been the reason for our success,” says Ricardo Castellanos, Verde Valle’s manager of international sales. “Our beans come from the freshest harvest, and our rice is considered the fluffiest and cleanest.”

Agrarian/Business Vision
The vision of the founder, Sergio Rosales, was to interact closely with Mexican farmers to buy the freshest crops available right from the farm fields. Moreover, Rosales wanted to package the food items in the most convenient form possible for the average consumer. Essentially, he took food items that had been commonly distributed as a commodity and turned them into consumer-targeted packaged goods.

Rosales founded Verde Valle in 1967, and since its inception, the company has mainly focused on distributing beans and rice throughout Mexico, according to its founders vision. In recent years, Verde Valle has been reaching out to the Hispanic food markets in the United States.

“When he founded the company, Rosales already had some experience working in the grocery stores and the first supermarkets established in Mexico,” recounts Castellanos, who adds that when Rosales retired in 1982 his three sons, Sergio, German and Alfonso, took the helm.

Building on that experience, Rosales developed an idea: to distribute Mexico’s most common food commodities, namely beans and rice, under a brand name that would become popular by providing consumers with convenience. At the time, the idea was unique in his country and he followed through by delivering a branded product to food stores. “He mainly focused on the grocery stores instead of the wholesalers,” says Castellanos.

But Rosales didn’t want to just package a food commodity in a new way; he wanted to ensure that his brand provided consumers with the highest quality and most nutritious food product. This added value would help facilitate success, he felt. To ensure the highest nutritional value and taste, the produce is freshly harvested each year. From the fields, the food is then shipped to Guadalajara, where it is cleaned and packaged and then sent to stores at a price affordable to consumers. Rosales first started with beans and then packaged and distributed rice in the same way.

Today, those two food staples remain Verde Valle’s core products. “In the past 25 years, 80 percent of the company’s business is packed beans and rice,” reports Castellanos.

Regional Distinctions
Moreover, instead of selling a generic bag of beans, Verde Valle distinguished its product by putting the brand name on different varieties of beans grown in Mexico, the brainstorm of CEO German Rosales. “This was the best approach to take, because different beans are consumed in different regions in Mexico,” explains Castellanos. “In each region, the consumers have a preferred variety of beans.”

Not only were different beans thus branded, but each bag indicated the crop years. “The consumers know that every time they pick up a bag, they are getting the freshest harvest available, along with the specific variety of beans they want,” says Castellanos.
In this way, Rosales made it possible for any consumer who picked up a bag labeled with his company’s name to know exactly what they were purchasing.

Facility and Product Line Expansion
Today, Verde Valle has expanded into divisions located in Guadalajara, Monterrey and in Mexico and Dallas, Texas. Foods are processed in two main plants. The larger plant, which turns out most of the product, is ideally located in Guadalajara. “In Mexico, beans are harvested in the north central part of the country and on the Pacific Coast, and Guadalajara is in the middle of those two regions,” indicates Castellanos. “So the location is very convenient for us.”

The smaller plant, which turns out a smaller volume of product, is located in Mexico City. “Also, we just opened a warehouse with 100,000 square feet for distribution,” adds Castellanos, “and we have another distribution warehouse in Monterrey.”

The company is expert when it comes to beans and rice, but its product line has expanded to include other legumes as well as cereal products. It offers a line of Branli cereals (which contain healthy oats, wheat and dehydrated fruits) and the Carolina line of food for domestic birds. However, beans and rice sold under the Verde Valle brand account for 80 percent of the company’s sales volume.

Leading the Market
In Mexico, Valle Verde has linked itself to the major supermarkets and the smaller, regional grocery chains. It utilizes its own system of sales and distribution and it maintains an aggressive and creative promotional program. “We also distribute to the government stores, which include about 400 stores that operate through the country’s social security system,” says Castellanos, “but our major business is in the large food chains as well as the small regional chains.”

To maintain its position as a leader, Verde Valle encourages feedback from consumers, to best determine what they seek. “We offer continuous feedback, through things like focus groups, to see what people look for in rice and beans, and we strive to implement everything that they tell us,” he says.

Ongoing Market Trends
As far as purchasing and product trends, Castellanos says Mexican consumers are no different than U.S. consumers in that they’re looking for convenience. “They want products that are quick to prepare, because a bag of raw beans can take anywhere from an hour to 90 minutes to cook,” he points out. “They want something that is fast, because, as in the United States, the culture, habits and demographics are changing. The major change, as in the U.S., is that women are working more. So, often, there is no one to cook at home. Therefore, consumers are looking for the products that are most convenient, as far as preparation. That is the main factor that affects our core business.”

In the United States market, Verde Valle is tapping into the so-called “nostalgia” factor that relates specifically to the burgeoning Hispanic market. “The Hispanics who have immigrated to the United States are looking for the kinds of foods that they came to know and love when they were growing up, and that is what we try and provide,” says Castellanos.

To that end, Valle Verde promotes the “authentic cuisine of Mexico” concept with products as fresh as those available across the border and sold under the Verde Valle brand name.
Currently, the company’s U.S. efforts are focused strongly on Texas and Chicago, two areas with thriving Hispanic populations. “We focused on Texas first, and we’ve established a tremendous presence there. That is our best U.S. market right now,” reports Castellanos.
But the company is also targeting Atlanta and California. “We’ve demonstrated strong growth in Atlanta in the five years we’ve been in that market. Also, in the past four years, we’ve been in the California market, specifically in southern California. So, those are the four areas in the United States where we have a growing presence,” says Castellanos.

Looking Ahead
Verde Valle is casting its gaze beyond those four areas and into the future. “There are still some growing Hispanic areas that we still need to target,” Castellanos reveals. “We think the United States will be one of the best areas for our products.”

He says that the export business is growing rapidly. “We have shown 35 to 50 percent growth every year in the export market,” reveals Castellanos.

Overall growth, he adds, has been as healthy as the company’s product offerings. In the past five years, Verde Valle has experienced double-digit growth. “In 2003, we grew about 15 percent. In 2004, we had 17-percent growth,” says Castellanos.

So how green is this Valle? Very verdant and fruitful, it appears. Verde Valle is the recognized market leader in Mexico, and it wants nothing less than to be the best-selling brand of Mexican rice and beans in the export market. Looking toward its North American neighbor, the company sees a U.S. Hispanic market that is ripe for the taking.