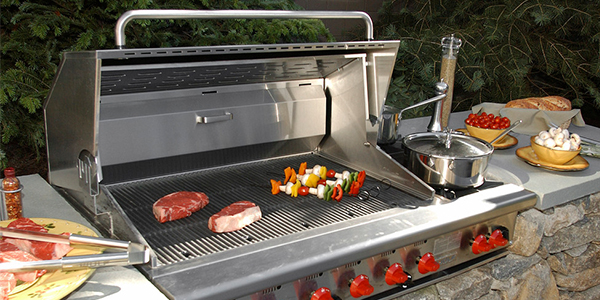 Outdoor gas grills may make great barbecue fare but they don’t fare too well over the years. It usually only takes one or two harsh winters to take its toll on an outdoor grill, as rust flakes begin to appear in food and holes pock-mark poorly manufactured burners. For anyone who’s experienced such physical depreciation, the thought of an outdoor grill with a lifetime warranty would be a welcome offer, and that’s the defining value proposition of Modern Home Products, Corp., (MHP) the company that built the very first outdoor gas grill.

“Since the beginning, MHP built products designed to last a lifetime and that philosophy remains the key differentiator between our company and the competition, especially in the gas grill market,” said Marketing Manager Don Gaylord. “We don’t name names of rival brands, but it’s clear that longevity is not a concept that goes into a lot of gas grills.”

On the other hand, at Modern Home Products Corp., it’s clear that longevity is the primary objective in manufacturing the company’s thick-walled, permanent-molded gas grills. Most competitors rely on thin-walled, die-cast aluminum or porcelain-cover, steel-grill heads which, said Gaylord, inevitably leads to aluminum warping and burnouts or porcelain-on-steel chipping and rusting. Gaylord and his colleagues know this for a fact because one of MHP’s successful divisions distributes replacement parts for competing outdoor gas grills.

Built to last
Modern Home Products Corp. was founded in the 1950s by Walter Koziol in Antioch, Ill. The company pioneered decorative outdoor gas lighting for the residential market at an affordable price for the homeowner. Up to that time, gas outdoor lighting was expensive and primarily used by the commercial and industrial market. MHP’s first gas lamps were marketed under the trade name of “Charmglow.”

As the gas lamp business grew, Koziol explored other ideas in which to use gas in an outdoor setting. His never-ending tinkering led to the development of the first outdoor gas barbeque grill. It was a 22 1/2-inch round steel grill on a portable cart supplied by either natural or liquid propane gas. That first gas grill was brought to market in 1960 under the brand name of “Perfect Host.”

In his pursuit, Koziol spent the next three years re-engineering the “round steel grill” and in 1963 introduced the first rectangular painted steel gas grill with a hinged lid, a better and more efficient grill concept, said Gaylord. In 1964 he began producing the first rectangular designed grills with a rust-free solid aluminum construction. And, today, it still remains the industry’s most popular design. In keeping true to the spirit of a pioneer, Koziol achieved other notable firsts in the gas products industry:
• award-winning designed double grill with one-piece bottom casting in 1966;
• universal and exact fit replacement parts for all major brands of gas grills in 1978;
• solid cast brass gas and electric outdoor lighting in 1987.

“Our founder, Walter Koziol defined MHP’s long-term success as our ability to consistently provide a high level of quality in our products,” said Gaylord. “Since we began marketing gas lighting back in the 1950s, MHP has continually designed and manufactured superior products that are subject to higher performance standards than the competition”.

Return of the founder
Walter Koziol once sold Modern Home Products Corp. to Beatrice Foods in 1969, but after Beatrice dissolved in 1985, Koziol decided to re-enter the gas grill and gas lighting markets, especially since loyal customers, suppliers, and retailers encouraged him to come out with much needed, better quality gas grills. At that time, said Gaylord, gas grills had become inexpensive, but their average life span was a mere two years or so.

Koziol’s solution was a new line with perm-molded grill heads, which not only provided greater stability and prevented warping and burnout, but also allowed for better cooking as the thick aluminum grill head retained more heat.”

Although Koziol has since past away, his influence as an innovator remains with the company. Said Gaylord, MHP’s technology team has developed a gas guard for its LP units as well as a regulator with a gauge on it that indicates how much gas is left in an LP tank, as well as an alert signal that detects gas leaks in the system. No other outdoor gas grill manu- facturer offers these features, said Gaylord.

Unlike the more prevalent LP models, MHP’s most popular lines are natural gas outdoor grills. These grills are connected to a gas line protruding from the exterior of a home rather than fueled by a propane tank below the grill. Said Gaylord, both models have advantages and disadvantages. Most significantly, the natural gas model does not require tank re-fills, so barbecue chefs need not worry about the all-too common dilemma of running out of gas during the middle of a party.

Another advantage of MHP’s outdoor gas grills (including its LP models) is their superior no rust, aluminum and stainless steel frames. Sturdier than the more common and cheap aluminum steel frames, Modern Home Products Corp. uses permanent-molded aluminum for its gas grill stands. This too prevents premature aging and rust. “Every nut and bolt is stainless steel,” said Gaylord.

“The Koziol family is very loyal to the company, and so are our employees,” said Gaylord. “People here know that they have a job for life, and we’ve remained true to many of our suppliers, some of which have been with us since the beginning.”
The company also invests its thoughts into the needs of consumers. MHP’s user-friendly Web site not only answers frequently asked questions, it provides recipes for outdoor chefs (visit: www.mhpgrills.com).

“The best of two worlds are combined in the use of a gas grill, the flavor of charcoal cooking and the convenience and heat control of your kitchen oven,” said Gaylord. “Outdoor cooking is a delightful experience and as you master using a gas grill, foods will take on a distinctive flavor resulting in eating enjoyment for entertaining friends or as a welcome treat for a family meal.”

Consumer Digest Magazine recently bestowed a “Best Buy” award to MHP’s WNK3 gas grill, said Gaylord, resulting in yet another accolade for a company that has earned the utmost respect in a “hotly” contested industry. With its commitment to quality, a family oriented management team, and doggedly loyal customers, distributors, suppliers and employees, it’s clear that Modern Home Products Corp. will be thriving for many lifetimes to come.