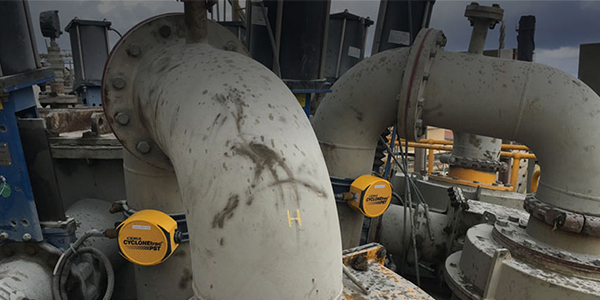 Founded in 1996, CiDRA has a rich history in successful business ventures, in the downhole oil and gas industry, the tele-communication networking, and most recently, the industrial process monitoring fields. Behind all of these ventures is the story of CiDRA Precision Services.

CiDRA’s first venture was in the harsh environments of the oil and gas industry. In 1996, the oil and gas business seemed to be secure and lucrative, and CiDRA was hard at work on a novel idea for this industry. Then, the price of oil went down to $11 per barrel and stayed at that plummeted rate for two years. CiDRA persevered through this time with innovation that today is a technology standard. CiDRA developed the first all-optical downhole sensor, with the support of the major players in the industry, staying strong and agile to make a name for itself, despite the volatile market. For CiDRA, this was the first of many triumphs over adversity.

“Downhole conditions could be monitored in real time for the first time – that was breakthrough technology,” said Tony Rauseo, the vice president for manufacturing at CiDRA. That breakthrough in technology eventually resulted in the sale of CiDRA’s Industrial Sensing Business to Weatherford International (NYSE:WFT) in November 2001 for $127.5 million.

Prior to the sale of its downhole oil and gas business, CiDRA, in 2000, was busy turning its sights on the then red-hot telecommunications market. CiDRA played a key role in this market as well, by once again developing leading edge optical products, and despite the downturn in telecom, still had a positive story to tell. At the time in the market when all looked bad, CiDRA Precision Services emerged.

The precision machining department was developed out of necessity. The high-tech optical products for downhole monitoring and telecommunications required a capability of high-volume, ultra-high precision machining of unique materials like glass, quartz, ceramics, sapphire and ultra-hard metals. So CiDRA invested millions of dollars on equipment that could grind, cut, polish, drill and mill the most difficult-to-work-with materials to very tight tolerances. In order to carry out such precision work, the company also had to invest heavily in an environmental system that would control temperatures within one degree, hold a tight range on the humidity, and purify the air. CiDRA Precision Services conquered all obstacles and is now capable of providing precision machining of unique materials to within two microns.

After the downhole business sale and the telecom downturn, the precision machining department was only using about 20 percent of its new equipment’s capacity. Its owners thought about selling it off – until they considered some of the potential markets for the equipment that could grind hard-to-work-with ceramics or glass down to a tolerance of a couple of microns. “The company could have sold its equipment, laid off its employees, and outsourced,” said Tony Rauseo, “but we decided to make a go of it. We decided to go back into startup mode and use our knowledge to start looking at other markets. We started with only four or five people.” Two years later, CiDRA Precision Services is gaining a growing list of clients in the biomedical, defense and optical sensing industries as well as some telecommunications customers.

“Today’s high-tech products demanded ever increasing tighter tolerances, and so it was important to deliver without increasing the price. When we looked at the job shop industry most worked to one-thousandth of an inch capability,” said Rauseo. “We work at one micron tolerance, or 25 times tighter than our competition.” Most customers turn to CiDRA because they don’t want to pay the high capital expense of re-creating such an environment, he noted.

CiDRA quickly saw some advantages over the competition in handling hard-to-work-with materials. Rauseo said the new shop could offer full-form grinding, which is the ability to make a number of intricate cuts in one shot. He said the job shop at CiDRA also offers precision slicing. “You can’t imagine how many companies require components cut to a precise size or length,” he said. CPS is also capable of computer numerically controlled, or CNC, milling of glass slides for the biomedical industry, as well as a laser glass fusing, collapsing and polishing.

Rauseo also said that CiDRA was able to use the telecom collapse to its advantage. The slump allowed the machining shop to buy new equipment from other companies at literally pennies on the dollar that, in turn, helped the firm to triple its capacity in just 18 months. He cited an instance in which a customer placed an unusual order on Dec. 23; with its new equipment in place by Dec. 31, CiDRA was able to complete the job by Jan. 15.

The CiDRA executive added that working with nickel titanium is what the new division excels at, calling it “fantastic material, pliable yet hard and strong.” Traditionally used in cell phone antennae, nickel titanium is increasingly being used as a medium for diagnostic and therapeutic in-vivo catheter systems, he explained.

CiDRA’s shop also works extensively in ceramics, which are used increasingly in homeland security products and in aerospace and other types of transportation. Ceramics are used for many high-tech applications in these industries, one of which is ceramic engine components that can run hotter and last longer.

But glass is still a cornerstone of the unit’s business, said Rauseo, who added that CiDRA partnered early on in the project with a major glass supplier “that has led to some nice business collaborations.” He noted that glass is in high demand right now because of its superior thermal and optical qualities, but the difficulty in machining the material to tight tolerances has been an obstacle until now. “We’re able to fill that niche,” Rauseo boasted.

By 1999, CiDRA’s production shop had already received its ISO-9001 certification – an achievement that is almost unheard of for such a young company. Said Rauseo: “We’re a small, fast company with process discipline like a big company – this makes our customers comfortable and confident about working with us.”

Rauseo said the precision services division already has strong orders for fiscal 2004, with projections for considerable gains. “I just see more and more growth potential – there’s so much more we can do in biomedical and in the whole medical industry,” he said. “In homeland security, defense and aerospace, there are a lot of applications we haven’t tapped.”

Just like their groundbreaking product that could see deep into the dark space of oil wells, the engineers at CiDRA stared into the black hole of the telecom bust – and were able to see opportunity where others could not.