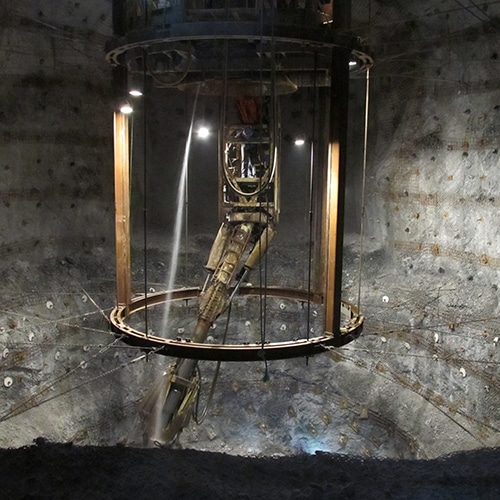 “The challenge for the mining industry today is twofold. The first is to raise financing for large multimillion dollar investments that last anywhere from two to five years. The second is to make sure these big capital projects run on-time and on-budget,” points out Roy Slack, president of the mine engineering and contracting company, Cementation Canada, Inc. “These two challenges are actually highly intertwined. Right now, new projects are having a hard time getting funding and one reason is because there is not a lot of investor confidence, because investors have seen so many projects of late run over. When a project runs over, that means more money spent and further delays towards earning a return on investment.”

It’s a huge challenge to dig into, but one for which Cementation is uniquely suited. “Unlike most mining contractors, we are a design-build company. We want to get involved literally at the ground level of a project,” Slack explains. “Early involvement means we can address engineering and technical issues on the drawing board, when it is a lot less expensive than in the field. It also means we can map out realistic budgets and schedules that ensure a mine is fully operational when we expect it to be. Moreover, such improved ‘constructability’ leads to improved operational and maintenance processes that directly results in a better ROI over the lifetime of the project.” Also add to that mix the fact that as part of a global underground mining platform, Cementation has access not only to a deep range of engineering and technical resources, but also significant procurement management strengths.

In other words, investors are more likely to have confidence in funding a project if they know Cementation is part of that project.

“We’ve evolved our EPC approach—Engineer Procure Construct—to EPD: Engineer Procure Deliver,” Slack says. “It’s a commitment to accountability by way of seamless integration of effective front-end planning that incorporates all the elements of engineering, logistics, project and performance management, and what is overridingly critical, safety. Unlike some management systems, we’re doing a lot more here than just generating reports. Reports only tell you what’s already happened. What we do with EPD is assess, manage and mitigate risks so we can deploy technologies to cost-effectively achieve attainable goals and deliver results under realistic schedules.”

Such a competitive differentiator is a particular asset in the current economic environment for the mining industry. “There have been a lot of deferred projects as well as some that were cancelled outright, in part because of the economy as well as general lack of investor confidence,” Slack says. “It’s an unusual industry that we always have to look at the long term. On the one hand, a mine operator could be benefiting from lower production than could be achieved, because that scarcity drives up prices. The flip side is in cases where inventories are up, metal prices are down, which means less cash for capital projects. In either case, there is a need to keep developing new supply sources to stay in business. And sometime if you wait, the downside is not knowing if the capital needed is going to cost more in the future than if the project started today. It’s a fine balancing act.”

He adds, however, that, “We’re beginning to see some positive movement with a few projects that are securing financing. We’re an engineering contractor and not financial analysts, but we watch the news like everyone else, and the general economic situation does seem more favorable of late. We are optimistic that more projects are going to be funded and we are going to be involved in the front end development.”

Canada and Beyond
As you might expect from the name, Cementation Canada focuses primarily on the North 40, and in fact was named one of Canada’s Top 100 employers in 2014, the seventh year it has won the award given out by the national newspaper company, Mediacorp. It is headquartered in North Bay, Ontario (about three-and-a-half hours north of Toronto) and last year opened an office in Rouyn-Noranda to better serve clients in the Quebec mining industry. “This allows us to expand service delivery in the area and more effectively meet the specific needs of the mining industry in this unique region,” Slack says.

Cementation’s reach extends beyond the Canadian provinces not only throughout the Americas, but also globally. “We’re partnering with Murray & Roberts Cementation in South Africa on the Venetia project to deploy North American shaft sinking practices. In addition to the obvious benefit to worker well-being which is paramount, fewer injuries means reduced downtime, more efficient operations and hence, improved ROI,” Slack says. “We’re excited to be part of this initiative that we think will have a significant bearing on South African mining practices.” Cementation’s own safety practices have resulted in many projects with zero lost time injuries. “Cementation is committed to safety because working safely is the right way to work,” Slack emphasizes. “We also recognize that a safe contractor is more attractive both to potential employees and clients.”

Another major project closer to home is the Vale Totten Mine involving the refurbishment of an old flooded shaft located in Worthington, Ontario, just West of Sudbury. “The project included the risk of rehabilitating the shaft instead of sinking a new one,” Slack says. “While rehabilitation is less expensive, the challenge is ongoing “just in time” engineering to deal with the shaft conditions that could not be evaluated while under water.”

Another noteworthy endeavor that illustrates Cementation’s well-earned reputation for technological innovation is the Young-Davidson project for AuRico Gold in Northern Ontario. This involved the use of a raise bore hole of 5.5 meter diameter drilled vertically to a depth of up to 1,000 meters in a very difficult rock formation. “There are gyro sensors in the drilling tool that immediately detect when the pilot hole drilling goes anywhere off vertical direction, and adjusts the drill direction to bring the hole back to vertical,” Slack explains.

Cementation employs roughly between 1,000 to 1200 in Canada, depending on the number of projects and the stage of the projects. While Cementation does not subcontract a lot of work, it does enter into many partnerships. One series of partnerships the company is particularly proud of is its relationships with First Nations and Inuit communities. “We’ve always been recognized as a ‘partner of choice’ among Aboriginal groups because of our respect for the people and the communities where we work,” Slack says. “One example is the development of the Diavik Diamond Mine in the Northwest Territories in partnership with the Inuit-owned Kitikmeot Corporation of Nunavut.”

He adds, “Most recently we have been a founding member of the First Nations Mining Corporation (FNMC), which brings together six major Aboriginal groups in the Ontario region. In addition to carrying out major mine development projects, FNMC will help First Nations communities enhance their understanding of the mining industry, identify opportunities, build capacity and develop their own companies to support mining projects.”

Slack emphasizes that whatever the mining project, Cementation offers in-house capabilities to engineer, construct and deliver a range of technically complex underground infrastructures according to schedule and within budget. “We think our unique design/build approach makes a real difference to mining owners and their investors. And we have the considerable record of success behind us to provide that confidence.”