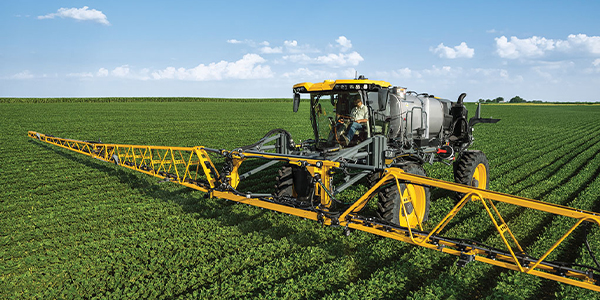 A lot of companies boast about doing things the old-fashioned way, but at the Hagie Manufacturing Company, a worldwide leader in sprayers and other high clearance equipment, they really mean what they say.

In an era of global manufacturing pressures, Hagie continues to carry out all of its manufacturing work in the small town where the company was launched nearly six decades ago, Clarion, Iowa. Rather than work through a complicated web of distributors, Hagie sells directly to custom applicators and producers.

Making the best agricultural sprayers has been the focus at Hagie since day one, even as the company has adapted its innovative technology for other uses, such as airport runway clearance. Company officials are strong believers in doing things the right way, including its continued use of front-mounted booms for agricultural spraying. The firm calls it Hagie UpFront.

“We are one of the few front-mounted booms – we’ve been front mounted since 1960, and we still are today,” said Tom Frost, the national sales manager for Hagie. To Hagie, the use of the front-mounted booms is a no-brainer, since it allows farmers to see potential problems before they occur.

Born on the farm
“The big advantage of the front-mounted boom is that you can see where you are and where you are going,” said Frost. The ground isn’t always level, he noted, and with the long, 120-foot booms on many sprayers today, it’s critical for the operator to see what the booms are doing.

It’s not surprising that Hagie has such strong opinions on sprayers, since the company and its founder Ray Hagie invented the world’s first self-propelled sprayer. Ironically, Hagie never intended to launch a manufacturing company; he merely wanted to grow corn in his farm in Iowa in the years right after World War II.

But Hagie, who still lives in Clarion and remains involved with the family-owned firm, was a natural-born tinker. At first, he created a new type of detasseler to mechanically perform work in his cornfields. It was, Frost recalled, a three-wheeled device that carried workers through the fields on a high-clearance bar and dramatically reduced the amount of time that the labor-intensive chore consumed. Then, he turned his attention to high-clearance sprayers, and in 1947 he created the company that was based on the farmland that he owns.

“Ray was just very mechanical; he could look at anything and come up with a different idea for how to do it,” Frost said. His first self-propelled sprayer was quite simple: a three-wheeler with a gasoline-powered engine and a solution tank mounted in the back.
But from that simple innovation, a company was born. Today, the privately held Hagie employs more than 200 people, almost all of them in Clarion, even as some of the best-known farming-equipment companies in the world, such as John Deere, entered the self-propelled sprayer market.

To Ukraine and beyond
And yet the company has a broad reach. Frost noted that the company’s strongest market remains in America’s breadbasket, the territory that extends from Ohio and Kentucky in the east to the farms of Oregon and Washington in the west, with a major focus on the Upper Great Plains. But Hagie also sells a number of sprayers in other markets, in part because its products adapt to many different types of crops.

“With high clearance, it gets you into a lot of variable uses; it isn’t just corn and beans,” he explained. “We get orchard trees and tobacco, and we do a lot in Hawaii.” Hagie also sells sprayers and other products in the Ukraine, considered the breadbasket of Eastern Europe, as well as in Brazil and Australia.

In the last few years, the farm-equipment industry has taken its cue from automobiles and other fields that farm out a lot of component work to overseas companies. But Hagie still notes that all of its equipment is made from scratch at the factory in Clarion. The company still makes its frames and cabs, and performs its
own welding.

That said, Hagie has also responded to changes in the industry, including the increasing size of the average farm in the 21st century. Although the company still makes and markets smaller sprayers with 800-gallon storage tanks that appeal to family-sized farmers, most of the growth on the agricultural side has been in larger models with tanks up to 1,600 gallons. Frost said that these larger models, with their 120-foot booms, enable larger farmers to cover more ground in less time.

The company introduced the STS16 in 2005 equipped with a 1600-gallon tank, which was an industry first. In addition to its large capacity and high clearance, the Hagie STS models include a number of features that were not dreamed of when Ray Hagie began tinkering in the 1940s. Its cab amenities include a 210-degree panoramic visibility field, ergonomically designed controls and placement, a stereo-CD-weatherband, air conditioning and heating with charcoal filtration. A hydraulically powered ladder and wide platform provide easy access to the cab from the back of the machine.

On the runway
Frost noted that Hagie has consistently upgraded its technology to ensure that the company stays on top of environmental and other trends. “The big thing that the government has been looking at is what they call `drift,’ which is making sure that the real fine mist settles on crops and doesn’t drift in the wind,” he explained. He noted the front-mounted boom helps minimize any problems.

Recently, the company has expanded its product offerings in the field of airport runway management. Last year, Hagie introduced its GST20 model, which boasts a 2,000-gallon solution tank that is used to apply deicing solution to airport runways and flight decks. The new models are able to handle runway bug control, an important precaution, as well as plowing and other functions.

But as the company has grown, Hagie has never lost sight of what made the company successful in the first place: all-American ingenuity.