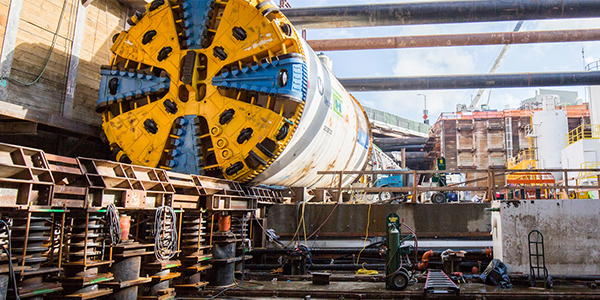 We like to think of ourselves as the company that dares to take on the projects that frighten off most others,” says Ken Blair, marketing director for heavy construction firm Traylor Bros., Inc., headquartered in Evansville, Ind. Not only does this family-owned business take these on, it frequently does the work under high-pressure deadlines under equally high-pressure conditions.

Traylor Bros. was recently ranked by the Engineering News Record as a Top 50 Domestic Heavy contractor. The magazine also ranked Traylor Bros. as 201st in overall Construction in the Top 400 Contractors; 21st in the Top 25 Bridge Contractors; sixth in Top 10 in Dams; first in Sanitary and Storm Sewers construction; 18th of Top 25 in Sewerage and Solid Waste; and, sixth in the Top 15 Marine and Port Facilities contractors.

The company was co-founded in 1946 by William Traylor, a civil engineer and former officer in the U.S. Navy’s Pacific Theater Construction Battalion, otherwise known as the Seabees. The firm’s early work focused on pumping stations, flood walls, and sewers, but soon grew to larger projects such as the Oak Ridge, Tenn. power plant and the Ohio River bridge at Shawneetown, Ill. In 1961, Traylor Bros. hit the big time – literally in terms of scope and value – when it was selected to build the McAlpine Dam in Louisville, Ken. at a cost of about $10 million, a very large contract at the time. This became the foundation for future large-scale heavy construction projects with values in excess of $100 million that characterizes its business core today. William’s son, Thomas W. Traylor, continues to build on that foundation as chairman/CEO and president.

“I think being a family-owned business that places an emphasis on professional management is a definite plus for us,” Blair says. “Being privately owned cuts out a lot of bureaucracy; it also means the executive leadership is more hands-on. At the same time, Mr. Traylor has always emphasized that any family members involved in the business are there not because of their relationship, but because of their proven capabilities. This is a company that recognizes and rewards talent. We’re a pretty lean operation and employees know they’ll earn more responsibilities through their on-the-job performance. Our engineers don’t sit at a desk all day, they’re out on the job, in the mud. That’s where the challenges are.”

Blair adds that the company’s longstanding experience and reputation is its primary marketing asset. “We do some traditional marketing, but in this type of business what really counts are the person-to-person relationships you develop with customers. Everyone in this business knows us, we have a good reputation as a class act with an extensive track record, and that speaks
for itself.”

Tunnels, Bridges and Dams
Traylor Bros. addresses four main markets: tunnels, bridges, ports and locks & dams. Virtually all of these are in one way or another government-sponsored projects in which Traylor Bros. and its competition respond to a Request for Proposals document. While a low bid is what almost always decides who gets the contract award, Blair points out that other factors can come into play. “We might be a little more expensive, but if we can do it significantly faster, that sometimes gets taken into consideration.”

One example where haste did not make waste, and in fact resulted in one of the biggest performance bonuses awarded by the Texas Dept. of Transportation, was the reconstruction of the elevated north and southbound sections of Interstate 45 through downtown Houston in just 95 days. In taking on the project, Traylor Bros. risked $53,000 a day penalties for late completion; instead it earned a $1.6 million early completion bonus for finishing the six-lane northbound side a week ahead of the deadline, and the southbound lane 23 days early.

Obviously, in jobs of these magnitudes, there’s a certain amount of joint venturing with other contractors; sometimes this is to provide certain areas of expertise or specialties, sometimes it’s to share the risk of a demanding job. However, what Traylor does not rely on is subcontracting its core responsibilities. Blair points out that “we own our equipment and we directly employ people skilled in their operation.” In fact, Traylor Bros. is recognized in the heavy construction industry for its vast amounts of company-owned equipment worth in replacement value of over $250 million. The heavy lift crane fleet includes an impressive Paceco 400-ton derrick crane. Traylor Bros. has strategically positioned heavy equipment nationwide to provide projects with flexible delivery coast-to-coast.

Effective personnel allocation depends not only on the specific project, but how many other projects are underway. “Each project has a business manager, project manager and project engineer supported by a staff of civil engineers, superintendents and foremen.” Blair says. Total employees fluctuate between 800 and 1,000, depending upon the amount of contracted work. The number of projects in various stages of completion during a given year typically ranges between 15 and 20. He adds, “If we need additional people to accommodate an increased workload, we have extensive relationships with a number of contractors in the industry that we can draw upon. When the project winds down, they get assigned somewhere else. Some of our managers prefer to work a certain geographic area, some will move wherever they’re needed. Basically, we go where the work is, if it’s a bridge or a tunnel or a dam or whatever. You have to be flexible, both geographically and in work type. That’s why we’ve been so successful over the years.”

Although Traylor Bros. has historically bid on domestic contracts, Blair notes that it has completed projects in Canada and Singapore and has proposals currently submitted for international work, but the main marketplace remains in the U.S. “For the last 10 years, the U.S. market has been particularly robust. We’ve been heavily involved in qualification based RFP’s and Public Private Partnership (PPP) proposals, and have successfully beat the competition on numerous large scale design/build projects,” Blair says.

Experience that Builds
The firm’s deep experience helps it not only price a job for sufficient profitability, but also meet aggressive scheduling. “Over the years we’ve developed cost histories for these types of large scale projects that pretty much tell us what it’s going to take. We have the personnel that knows how to do the job, and the engineering expertise to know what it will take to get it done, this allows us to meet or exceed the tightest schedules and deadlines.”

Case in point: the near $136 million contract was recently awarded to Traylor Bros. to build a replacement bridge for Interstate Highway 45 over the Galveston Bay for the Texas Department of Transportation. The anticipated project schedule involves four years of construction and includes 970-drilled shafts, 300 concrete precast pile and over a million square feet of bridge deck. This represents one of the largest awards in the company’s history, and was won in part by the company’s previous experience in the successful construction of other bridges in Texas using a similar crane trestle system proposed for the Galveston project.

Another significant new endeavor is the recently awarded contract with the Mississippi Transportation Commission for first phase construction of the Mississippi River Bridge near Greenville on U.S. Highway 82 between Washington County, Miss., and Chicot County, Ark. Blair characterizes the bridge as a “vast expansion with a 1,378-foot center-span. That’s quite challenging for a project that, when completed, will cost over $110 million.

“We’ve teamed with Massman Construction Co., of Kansas City, Mo. both to share the risk and to meet a tight deadline to complete the first phase construction of the cable-stay span,” Blair says. Interestingly, the entire construction process will be documented online via camera mount on the existing bridge that the new structure intends to replace. From the Web site (http://www.greenvillebridge.com), visitors will actually be able to control the camera to select specific panoramic and telephoto views of ongoing construction.

Traylor Bros. is just as expert when working underground. In 2004, the Underground Division began work on a massive sewer project in Columbus, Ohio in a joint venture effort involving the mining of 20,800 linear feet of 16-foot diameter earth pressure balance (EPB) tunnels under the water table. Additional tunneling projects underway or recently completed include subway systems in Los Angeles and New York City, as well as underground water and sewer systems in Detroit.

For the Metropolitan Water District reservoir that supplies drinking water to Southern California, Traylor Bros. demolished and modified an outlet tower. The project required the removal of an upper 122-foot section of a 175-foot-tall concrete tower that extended 45 feet below water and 130 feet offshore. In addition, the structure required a permanent concrete plug and the removal of a 320-foot steel pedestrian bridge. Part of the engineering solution required jacking up the tower above the water line to eliminate the use of expensive underwater diving and wire-saw cutting.

All of this serves to demonstrate that whether on water, above ground or below, Traylor Bros. has a proven track record of being one of the most successful and reliable heavy civil and underground contractors in the United States.