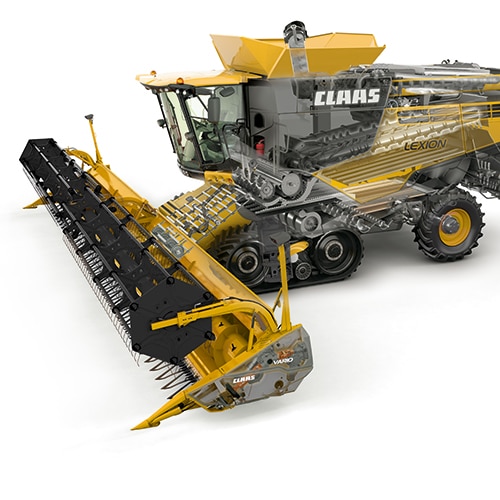 The company made its entry into the United States in 1979 and built its first facility in Columbus, Ind. The LEXION combine – currently the only CLAAS product manufactured in the U.S. — was introduced to North America in 1997. The Omaha facility was built in 2001 as part of that venture to manufacture and sell the LEXION combine through Cat dealers. When Caterpillar eliminated agricultural manufacturing from its portfolio in 2002, CLAAS bought back Caterpillar’s 50 percent share of the joint venture to continue supporting North American farmers. The company advanced the LEXION platform and in 2010 launched its next generation LEXION 700 Series to American producers.

Lexion: The Jewel of the Midwest
Today, the Lexion combine remains the lead product in the CLAAS portfolio, built for producers of corn, soybeans, small grains and other row crops. In fact, CLAAS has pulled ahead of others in the industry in combine design and technological features with its LEXION combine line, which further sets it apart in the industry.

“This combine is a very important piece of equipment in the farmer’s barn,” stresses Leif Magnusson, president of CLAAS of America. “What’s unique about the LEXION is the APS HYBRID SYSTEM that combines two proven technologies: the Accelerated Pre-Separation (APS) threshing system and the ROTO PLUS separation system – forming the most productive threshing and separation system available.”

The APS tangential threshing system – positioned in front of twin –separation rotors – -separate up to -90 percent of the grain. The increased threshing capacity, reduced power needs and lower fuel consumption make the LEXION a true workhorse in the field.

“Our system can adjust to changing crop conditions to minimize grain losses,” Magnusson further explains, adding that, with commodity prices rising, this feature is extremely critical to the farmer’s harvesting operation. In addition, the company has optimized machine settings for small grain harvesting on the LEXION through its CEMOS AUTOMATIC system, which uses numerous sensors to monitor a wide range of machine parameters second by second, immediately adjusting the settings in line with changing conditions. It does this more quickly and accurately than an operator would ever be able to. The rotor speed, rotor flap position, fan speed and the opening of the upper and lower sieve are controlled autonomously by CEMOS AUTOMATIC in line with targets specified by the operator.

A LEXION combine, can cost anywhere from $350,000 to $750,000, and is available with front track system an option that is selected on more than 50 percent of the LEXION combines sold in North America.

“That is unique for us,” Magnusson says. This allows the farmer to work in fields – with critical ground conditions, enabling him to harvest his crop when others can’t. The track system also allows for less ground compaction in dry conditions and, with headers as wide as 40 feet, the tracks provide more stability while harvesting. Also, a nice comfort feature is the independent suspension of the track wheels for higher end speeds and improved suspension when the machine is transported from field to field, at speeds up to 25mph.

The third-generation Lexion 780 just unveiled at the recent Ag Connect trade show, made a significant impression on people in the industry. The new flagship product is the biggest combine in the world at just under 600 hp (combines usually range between 60 and 600 hp – the average in North America is just over 300).

“Farmers have a limited window to harvest their crops,” Schofield notes. “This large machine can replace two combines due to its high capacity, fuel efficiency, grain loss savings, and reduction in labor costs. Most farmers will quickly realize the value the LEXION 780 offers.

Placed horizontally behind the engine, the system is able to consistently draw in clean air from the top of the combine, as opposed to being placed on the sides. A variable fan drive helps conserve power by adjusting speed automatically, depending on the level of cooling needed. The cooling system also maintains a barrier against dust and debris. Air that is expelled from the motor through side cooling vents creates a “curtain effect;” this method of dispersing air prevents debris buildup on the radiator.

The Future of Farming
The second premium product offered to North American farmers is the JAGUAR, a highly productive forage harvester for silage production, with the ability to chop grass, winter forage and corn for animal feed. The JAGUAR is designed and built to offer the highest level of silage quality to provide the greatest nutritional value for the animal.

Marketing Coordinator John Schofield explains the importance of well-chopped forage. “Cows aren’t efficient eaters; they don’t chew well. If the forage harvester doesn’t process and chop the crop well, the cow won’t benefit from the nutrients in the crop.”

The JAGUAR market remains solid, despite the dairy and beef markets having suffered a few years ago, which increased the price of silage. “Now the industry is coming back strong,” Magnusson says.

Both the JAGUAR and LEXION are marketed to large farmers through the United States and Canada. In the combine market, Magnusson reports that the LEXION has seen strong sales in North America since 2007, primarily because of the rise in the ethanol market, and even despite the severe drought conditions, especially in 2012. “During the drought a lot of farmers had such low production levels that, instead of harvesting with combines, they chopped the corn for forage, which had an effect on combine sales as a whole for the industry,” Magnusson says.

He adds, however, that “according to the USDA, 2012 was one of highest ever as far as agricultural farm income because of new technologies.” Among these technologies is software that allows the LEXION to read yield data and map farmland via GPS, so the farmer can better determine strategies for planting and fertilizer application. The USDA, says Magnusson, also predicts that the 2013 planting season looks promising.

“The world of the farmer is not so easy,” Magnusson says. “The drought of 2012 was some of the most severe drought the Midwest had ever seen. But because of the technology we have today not only in preparing land but in genetically modified seeds that are heat and drought resistant, loss in yield last year between corn and soybeans was only 20 percent.” Before such advances, a drought like the one we experienced in 2012 would have destroyed 80 percent of the crop, he says.

With the same chairman, Helmut Claas, at the helm since 1961 and his daughter, Katrina, also involved in the family business, CLAAS of America is set to turn the North American agriculture industry on its head. They might be supplying farmers in the middle of nowhere, but their products are at the center of an explosive turning point in the agricultural industry.