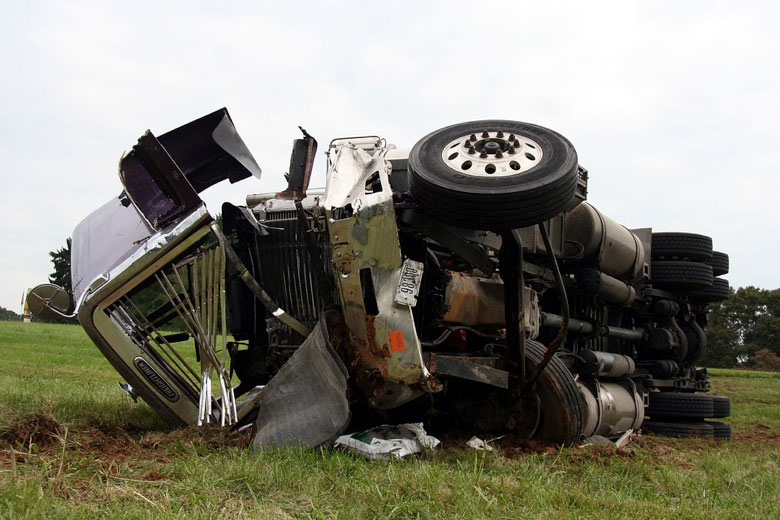 There are many reasons a semi-truck can get in an accident and one of them is being improperly loaded.

A truck accident is one of the most devastating types of vehicle accidents that can happen. The sheer size and weight of a semi-truck means that it can leave a lot of devastation in its wake if it ever gets into an accident. Smaller vehicles and their occupants could be in serious trouble if a truck collides with them and a semi-truck accident could end up causing a chain reaction that involves a lot of other vehicles.

There are many reasons why a semi-truck can get into an accident and one of them is that the trailer was improperly loaded. But no matter the reason for the truck accident, you will need help to recover from it because medical and repair expenses could get extremely high. A truck accident attorney can give you the help you need to recover the compensation to take care of those expenses. So be sure to contact an attorney as soon as possible after you have been in a truck accident.

When the trailer attached to a semi-truck is improperly loaded, that can mean a number of different things. It could mean that the load is unbalanced, meaning that the weight of the cargo is not distributed evenly. It could mean that the cargo is too heavy, which could affect the handling of the vehicle. The cargo may not be secured properly, which could cause it to shift around while it is being transported. Any of these types of improper loading could end up causing an accident because they affect the handling of the truck.

The different types of improper loading could cause accidents for different reasons.

An imbalanced load could affect the handling of the truck because of the uneven distribution of the weight of the cargo. It could affect different parts of the truck causing them to fail. The truck frame, tires, suspension, and axle housings are all put under immense strain when the cargo is unbalanced, and that could cause them to fail at a critical juncture, which could lead to an accident.

The way in which the cargo is unbalanced could also negatively affect the truck’s handling in different ways. If the weight is too far forward, then it could cause the brakes to become too touchy and sensitive. This could lead to what truckers call trailer swing, which is when the trailer swings out to the side. Weight that is mostly distributed to the rear of the trailer can lift weight off of the front tires of the truck, which makes handling far more difficult. If there is too much weight on either side of the trailer, then that could cause a rollover crash when the truck makes a tight turn. It could also cause the brakes on one side of the truck to lock up, which can lead to jackknife accidents.

Every truck is assigned a gross vehicle weight rating (GVWR) by its manufacturer, which is the maximum weight that the truck is allowed to tow. In order to keep the weight in check, truck drivers must make use of various weigh stations along their route to make sure that the cargo is not too heavy. That is because an overweight cargo could affect the truck’s performance, particularly on inclines and declines.

If the weight is too heavy, then the truck may descend an incline faster than expected, which could lead to the driver losing control of the truck. A heavy load would require greater braking power than the truck is able to provide, meaning that the stopping distance is much longer than normal. Steering is also negatively affected by an overweight load and can result in the truck being much more difficult to control.

An unsecured load is one that has not been properly tied down. That could have negative consequences for the truck driver as well as other vehicles on the road. In the case of the truck driver, an unsecured load could move around, which can affect the truck’s centre of gravity and make it hard to control. This could lead to accidents because the truck does not handle in the way that the driver expects because of the shifting load.

An unsecured load could be a danger to other drivers because the load could fall off of the truck and create an obstacle in the road. That is dangerous because drivers could run into that obstacle and damage their vehicle or they could swerve to avoid it and end up causing an accident. Cargo falling off the vehicle could also hit other vehicles directly, causing lots of damage to both the vehicle and the people inside of it.

Contact an Attorney if You Have Been in a Truck Accident

You should contact an experienced attorney as soon as possible after a truck accident regardless of how it was caused. That is because the trucking company is ultimately responsible for the accident and they will have an army of lawyers backing them up; a truck accident attorney can help to even the odds. They can hold the trucking company accountable and give you the best chance of getting the compensation that you need.