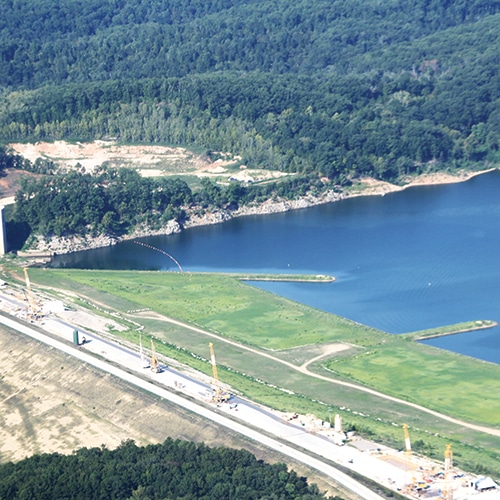 In a conversation with Steve Engelhardt of Industry Today, Jeff Bean, Vice President of Operations for the company’s Geoconstruction division, and Giancarlo Santarelli, President of Bencor, a wholly-owned, deep foundation-based subsidiary of Layne, talk about the history of the company, a couple of huge projects they are currently working on, and why 2014 looks to be jam-packed full of new activity.

Layne’s roots as a company go back further than most, with the company being founded in 1882 as a small water-well drilling business in South Dakota. Over the years, through multiple acquisitions, proprietary rights ownerships, and expansions, the company now has over 100 offices and affiliates located across the United States, Canada, Mexico, South America, Europe, Africa, and Australia, truly making them a global business. Amongst their six divisions, is their geoconstruction unit, which specializes in heavy civil, industrial, federal, and commercial construction projects, and, as Bean and Santarelli discuss, is an area of the company that is currently doing many big things around the world, particularly in North America.

Easing the Flow
Specifically, Bean says that recently his unit has been dealing largely in, among other areas, combined sewer overflow projects and the corresponding need for deep foundation systems that go along with them. “We typically do these in big urban areas, where there is a lot of human and industrial waste that gets into the ground water,” he says, adding, “and when mixed with surface water from a heavy rain, can go into storm drains that lead to sewage facilities where there becomes an overflow and causes excess to run off into other areas like lakes and rivers.”

Bean says that his company will go in and build large diameter concrete shafts that go deep into the ground and act as holding basins for these excess water flows. The water can then be collected after the storm and distributed in a slow, controlled manner into the sewage treatment facility, avoiding the overflow that causes surrounding bodies of water to become polluted. “These big shafts, or combined sewer overflows, are something we are heavily involved in as a company. It has really become a strength in regards to our construction capabilities.”

He says that Layne recently completed one of the biggest projects ever in Washington D.C., where they designed and installed heavily reinforced concrete shafts as part of the Blue Plains Tunnel Project. “We were able to come and install a design of shaft that had never been done before and it has really led to positive feedback,” he says, adding, “in fact not soon after, we found ourselves right back in D.C. for another project.”

The project Bean is referring to is the Washington D.C’s Clean Rivers Project, which seeks to reduce combined sewer overflows into the city’s local and surrounding waterways. “The project involved us installing five shafts, where two of them were joined in the middle creating an almost ‘binocular-like’ configuration,” he says, adding, “this structure allows the contractor to excavate inside to remove soil after the concrete is placed, so that personnel and equipment can get to the bottom of these 230-foot shafts in order to build pumping stations and enable tunnel-boring machines to be able to get in and do their job.”

Once the tunnels are made, workers can then get in and install piping that will allow for the transfer of water back and forth. “It’s part of a several billion dollar civil works project and with our capabilities in deep foundational work, we are taking on one of the first phases of the project,” Bean says.

Elevating the West
Zooming out from Washington D.C. and shifting over to the other side of the United States, Bean and Santarelli say they are part of, perhaps, an even more prestigious and significant project currently going on in San Francisco. The construction of the TransBay Tower is set to give the Bay Area city “the tallest building west of the Mississippi”, and Santorelli’s Bencor unit, specifically, was tasked with installing the main foundation for the tower.

“Bencor, and Layne by extension, is currently installing a load-bearing element, which is a 330-foot deep reinforced concrete pile, and will serve as the main foundation support for the structure,” says Santarelli. He adds that, for the project, they are working to install 42 load bearing elements to support the building’s weight, with each element, which are five by ten feet in size, being able to withstand up to 14,000 tons.

Bean adds that these particular elements are built on site with a hydromill machine that is supported by a crane at the surface. “The machine then drills to depths in excess of 300 feet, where steel reinforcing bars and high strength concrete are put in. Once their integrity is verified, other contractors then move in and construction of the actual building can begin.”

Industry Veterans
Bean and Santarelli say that working on massive projects like the D.C. Clean Rivers Project and San Francisco’s TransBay Tower, which involves maneuvering heavy machinery in crowded, urban environments, can be strenuous by nature but is an environment they have become quite comfortable operating in, given their high frequency of projects in major cities across the world. “It’s something we do daily, and I credit our experienced team of engineers who thoroughly plan our trucking of equipment, offloading, and maneuvering based off a very small footprint,” says Bean, adding, “Giancarlo has been working in this industry since the 60s, and I’ve been doing the same since the 80s, so there’s a lot of experience and knowledge that greatly aid the planning of our projects.”

Santarelli points to a specific project that Bencor recently completed with the U.S. Army Corp of Engineers, as a testament to the amount of research and planning that is necessary for the kind of projects Layne takes on. “We always take on prominent projects wherever we are, and with the US Army Corp of Engineers, it was a $110 million project that was very complex in terms of risk,” he says, adding, “we were repairing a dam for them and with that comes the risk of loss of significant life and property should the dam give out, which is something we take very, very seriously.” He says with all the planning and preventive measures taken, they still were able to finish to the contract a year ahead of schedule.

Bean adds to this, saying, “Awareness of our surroundings and the safety needs that stem from them is our ultimate priority,” he says, noting, “for example, we work with some of the largest mining companies around the world, particularly in South America, and they all have extremely rigid safety requirements. We take that philosophy and channel it through every project we participate in.” He says that Layne has many satellite subsidiaries and offices around the world so that they can have a physical presence to oversee every project they take on, no matter the location, to ensure quality and effectiveness of work.

Layne’s dedication to precision and planning has brought them great success over the years, and 2014 looks to be no different. Bean says he expects the Geoconstruction division of Layne to grow by as much as 60 to 65 percent by the end of the year in the North America region, and their operations in South America to increase by 35 percent. And Santarelli’s Bencor is a significant part of this as well, as Bean describes the partnership between Layne and its subsidiary unit as a “harmonious and necessary one, and with our combined synergy, we allow ourselves to be capable of the most highly engineered, specialized projects around the world.”

Bean sums it up as, “At the end of the day, Layne, and Bencor by extension, represent one of the most highly engineered companies, in our company’s makeup and its construction capabilities, and I think the identity we have attained based on reputation speaks for itself in terms of the quality, efficiency, and professionalism in how we approach projects.”