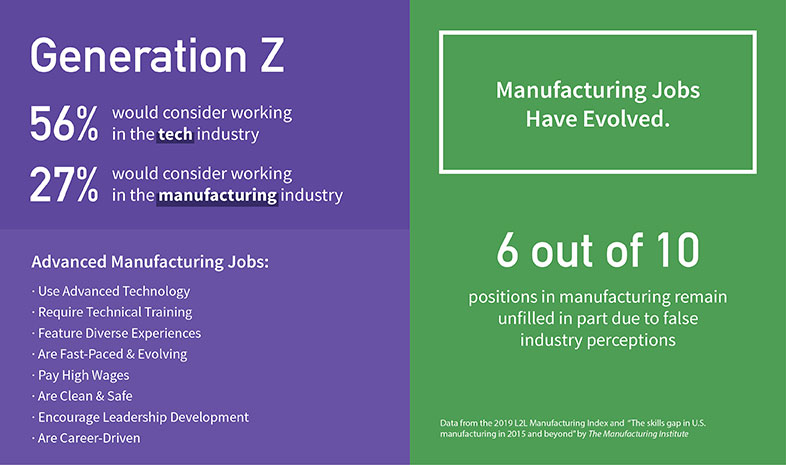 By Keith Barr, CEO and President of Leading2Lean (L2L)

A massive shift is coming to American manufacturing over the next decade. It’s a deflection point, a divergence of two roads. Manufacturing will either grow and flourish, or surrender and diminish, depending on what road is taken.

In just five short years, one in four working adults will be over the age of 55, according to the US Department of Labor.1 And despite most Americans expecting to retire around the age of 66, the actual average retirement age is 59.

Baby Boomers have been the largest generation by population in the U.S. since the post-World War II era of the 1970s and 1980s. It was that generation that lifted manufacturing to one of the most important industries in the country. They set a high standard of work ethic, acquired great industry knowledge, and they are about to pull their coats off the hooks, walk out the door and enjoy retirement. Behind them will be a giant, gaping hole of lost knowledge and a lack of workers on the plant floor. Currently, there is no line at the factory door of young workers looking for a job.

And manufacturing only has itself to blame. The industry has been slow to explain how manufacturing has evolved. No longer is it repetitive, assembly line jobs. It is a highly technical, dynamic workplace where workers are challenged and innovation is demanded every day, every shift. Just this year, Millennials are pegged to overtake Baby Boomers as the largest generation alive. Despite the incredible changes coming, it’s not too late to turn perceptions around. But the clock is ticking.

As we look ahead to the next decade, we must identify ways that manufacturing companies can continue to stay relevant and cater to the changes taking place in the workforce, and that discussion starts with a generation that to date has not been a large part of the conversation – Generation Z: the generation just now starting their careers. And it’s in this generation that manufacturing must concentrate its efforts to build a 21st century workforce.

As CEO of a lean manufacturing software company, I commissioned a survey to see where Generation Z’s opinions and assumptions on the manufacturing industry stand. Launched in May, the 2019 Leading2Lean Manufacturing Index asked Generation Z adults (aged 18-22), as well as the general population, about their familiarity and association with the industry, if they would consider working in manufacturing, and the role that tech plays in our industry.

We learned that Generation Z has had greater exposure to the industry compared to prior generations with one-third of them having family members or friends working in the manufacturing industry, compared to only 19% for Millennials and 15% for the general public. As research has shown us that people who have an association with the manufacturing industry are far more likely to view it in a positive light, this presents a huge opportunity to tap into this audience and encourage positive and realistic discussions around careers in modern manufacturing.

While greater awareness and familiarity appear in larger portions of the Generation Z segment than in older generations, the survey highlighted areas where false assumptions on the modern nature of manufacturing jobs still persist. For instance, 56% of Generation Z would consider working in the tech industry, while only 27% indicated they would be interested in working in manufacturing. Generation Z was also 10% less likely than Millennials to agree that manufacturing jobs involve the use of cutting-edge technology.

We also found that a shocking 75% of people have never had a counselor, teacher or mentor suggest they look into attending trade or vocational schools as a means to a viable career. Many people in the industry have relied on alternative forms of education to become trained for a career in manufacturing, making this an incredible missed opportunity.

Clearly, Generation Z is better informed and more aware than their Millennial counterparts on the potential of a career in the industry. Leveraging even slight familiarity is the stepping stone for larger discussions around what modern manufacturing of today looks like.

We have a duty as an industry to prepare for the coming ‘Silver Tsunami’ of Baby Boomer retirements. Now, we must recruit and retain a new generation of employees to manufacturing. Articulating the modern nature of the industry to a tech-savvy generation is a great place to start.

About the Author
Keith Barr is an experienced and informed authority on the challenges and changes currently impacting the manufacturing industry. He is President and CEO of Leading2Lean, a manufacturing software technology company and creator of CloudDISPATCH.

Keith has deep experience as a senior executive in the technology industry and as a turn-around expert. He has worked in maintenance and logistics, CRM, IT Service Management, cloud-based solutions and product development. Companies include Ivanti, Echopass, Sento and Sykes.

Keith believes that manufacturing can only survive by evolving and adapting to new technologies and new lean methods. He insists that plant managers need truth, rather than simply data. Solving problems on the factory floor requires employee engagement, aligning of management objectives, and creating an environment that promotes constant enhancement of product and process.