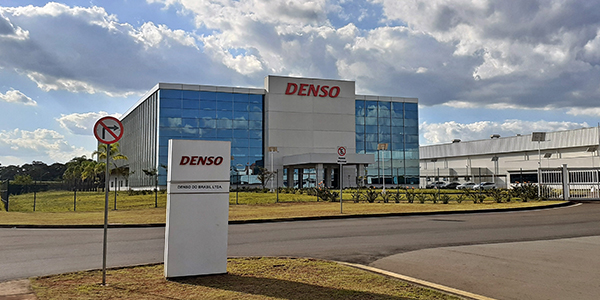 Denso do Brasil is only one of 179 consolidated subsidiaries of Denso Japan, one of the world’s leading manufacturers of car parts and automotive components with 106,000 employees in 32 countries. An integral member of the Denso family – in constant communication with its corporate “siblings” and with access to the latest technology, equipment, and production methods of a global giant – Denso Brasil is the first of four autonomously run Denso affiliates to mark its presence in Brazil. While the company has brought global quality, innovations and standards to Brazil, it has also had to adapt to the peculiarities of the Brazilian market. The result has been a juggling act, which Denso Brasil has performed with great dexterity.

“Essentially, we are a global company that works to meet the needs of our clients all over the world,” declares Ronaldo Araújo, commercial manager of Denso Brasil. “We have important clients in Europe and the U.S. that rely on the latest global technology developed by our laboratories coupled with the brand-name quality and standards that have made Denso the third largest auto parts manufacturer in the world after Bosch (of Germany) and Delphi (of the U.S.).”

Like its competitors in Brazil, Denso Brasil relies heavily on the export market and focuses much of its efforts on meeting the requirements of demanding American and European clients. “Exports have increased a lot. Around 30 percent of all the automotive industry in Brazil today – parts and assembled vehicles – relies on the export market,” explains Araújo. “In Brazil, there is still a lack of consumer buying power. The domestic industry doesn’t grow that much – only around 5 percent a year. In 2006, approximately 2.5 million vehicles will be manufactured here. That’s a small volume compared with figures in the U.S. and Europe.”

Banking on Quality
Because they are commodities with set international prices, selling auto parts in Brazil – like anywhere – can be a tricky game. To differentiate itself in the marketplace, both within Brazil and overseas, Denso Brasil plays the quality card. Aside from its world-renowned brand name and its finely tuned logistics – based on the TIE (Total Industrial Engineering) philosophy, better known as the Toyota Production System – Denso’s strategy is to seriously invest in research and development. In terms of air conditioning systems, for example, its state-of-the-art laboratories include a performance room, a climatic chamber, (for climatic tests of components used in heaters, ventilators and air conditioners), and a room for measuring noise and vibrations. Says Araújo: “Our laboratories are incredibly well-structured and superior to those of our competitors here. Our development capacity is greater.”

With the support of the worldwide Denso clan, Denso Brasil can pursue its goal of extending existing product lines while constantly adding new components. Over the next five years, products manufactured by Denso plants in other parts of the world will be introduced by Denso Brasil as part of an aggressive plan to achieve organic growth and reach more clients, particularly assemblers, thus increasing output volume.

With a quarter-century’s experience in Brazil, Denso has had lots of time to hone its strategy. Denso Brasil set up shop in 1980, in São Paulo, but didn’t start producing parts until the completion of its 540,000-square-foot factory complex in Curitiba, capital of the southern state of Paraná. It began by producing air conditioning compressors for the Brazilian market and one of its first clients was General Motors Brasil. The following year, it inaugurated two new product lines – motor pumps and motorcycle magnetos – and began exporting compressors to overseas clients. Since then, Denso’s product line has expanded significantly to include condensors, evaporators, radiators, tubes, intercoolers and HVAC (heating, ventilation, and air conditioning) systems.

Currently, the company is focusing on the growing air conditioner segment, which has seen growth in Brazil of between 3 and 5 percent. With an emphasis on providing increased comfort and security, Denso is also highly concerned with the environmental impact of its systems, particularly the release of Chlorofluorocarbons (CFCs) that destroy the ozone layer. According to Araújo, Denso Japan’s engineers are already at work developing CO2-based air-conditioning systems that would be completely free of CFCs. Once adopted, the technology will be shared with Denso Brasil. In the meantime, Denso Brasil’s engineers are concentrating on improving the thermal aspects of air conditioning systems. As proof of its environmental commitment, Denso was the first company in Brazil to make a vehicle air-conditioning system, relying on coolant that doesn’t damage the ozone layer.

Says Araújo, “We have a really strong environmental concern, which is an important part of the Denso mission, globally. We not only follow Brazilian safety and environmental regulations, but we also adhere to standards that are set in Japan concerning emissions, pollution, and toxic materials. Our clients here, among them Toyota, Fiat, GM, Honda, Volkswagen, Volvo, and Ford, in the U.S., and particularly those in Europe, are increasingly demanding on the environmental front with respect to issues such as contaminating metals, namely chrome and zinc. Any environmental accident we have here will affect Denso’s reputation around the world, and vice versa.”

Although not all of the high environmental standards set in Japan, Europe and the U.S. have been adopted in Brazil, Araújo predicts that they will come – and when they do, Denso Brasil, which recently earned ISO-TS 16.949 and ISO: 14000 certifications, will have an advantage.

Preparing for the Future
Advantages are essential as Brazilian, like other global manufacturers of auto parts, face the competition of the burgeoning Chinese automotive industry. Says Araújo: “This is going to be one of our biggest challenges because the prices of their products are so low, although at this point they are still a bit deficient in terms of quality. Battling the Chinese on price is almost impossible, so for us the key word is quality.”

Another hurdle is the exchange rate. Over the past two years, the American dollar has lost over 30 percent of its value, while the Brazilian real has increased in strength. This exchange rate has hurt exports by driving up normally low prices for Brazilian products. The effects of the rising real have had an impact on all Brazilian industries, but particularly on the automotive supply chain, which depends greatly on the number of volumes sold. Comments Araújo “Domestic consumption will have to increase, if not we’ll enter into a crisis situation.”

Luckily, the Brazilian market is increasing – and with it, Denso Brasil. Already a leader in certain segments – such as air conditioning – the company overall boasts a strong market share that has been steadily increasing with the introduction of new products. And while growth of the automotive industries in Japan, Europe, and North America have stabilized, and even risk becoming stagnant, Araújo points out that Brazil, along with the rest of Latin America, Africa, and India are regions with potential for great growth and volume. For this reason, he is quite optimistic about the future.

Says Araújo, enthusiastically: “This untapped potential coupled with the new technologies emerging from Europe and the United States make this a very interesting sector to be in right now.”