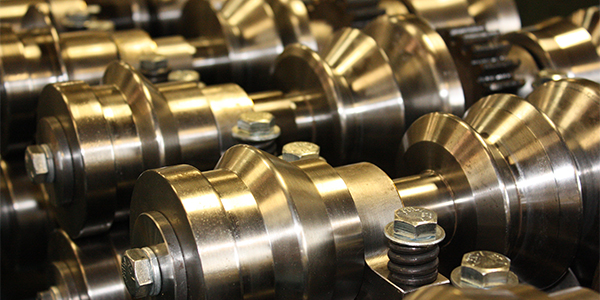 There are two ways of looking at Formtek, Inc. In the broader sense, it is an umbrella group of some of North America’s top makers of metal roll forming and processing equipment, with industry-leading units stretched out from Maine all the way to Beijing, China and Fribourg, Switzerland.

But to Rian Scheel, the vice president of marketing, Formtek is something else: “A way of doing business.” He explained that executives at Mestek, Inc., Formtek’s parent company, decided roughly a decade ago to bring together a large and diverse collection of some of the leading names in metal-forming equipment, thus providing a level of customer service and attention to the metal forming needs of customers that would be unmatched by anyone else. “Many of these brands are 70, 75, even 85 years old,” Scheel said. “The excellence, the execution, the professionalism and performance of all of these brands makes people want to buy from a company like this with global resources. All of our brands are bolstered by integrity; we didn’t want to change the integrity of the brands.”

Indeed, longtime professionals in the metal-fabricating industry form the assortment of “name” companies that have now been assembled under the Formtek umbrella. They include Cooper-Weymouth Peterson, B&K, Dahlstrom, Engel, FMI/Dahlstrom, Hill Engineering, Iowa Precision, Iowa Rebuilders, Lion, Lockformer, Rowe, Tishken, Winpro, AXON and Yoder. The smaller companies mesh together in a way that allows Formtek to serve as a top-shelf, one-stop shop for metal-forming equipment – a continuum of solution providers in varying capacities, offering richness of features and price.

Looking to the World
Since this Mestek unit was created in the mid-1990s, Formtek has also aggressively moved to meet new needs in the marketplace – many created by the forces of globalization. And like many of the customers that the company serves, Formtek has been building a strong presence in Asia where machine tool sales now represent more than 40 percent of worldwide sales.

In early 2004, Formtek formed a new unit: Formtek Machinery Beijing Co., Ltd. in Beijing, China, which operates as an assembly and machinery integration operation in a 2,800-square-meter shop that it leased for 10 years. The Beijing unit assembles North American-quality machinery licensed from its U.S. affiliates for sale to metal formers in Europe, Asia and the Middle East.

Scheel said the goals in opening manufacturing operations to China are simple: (1) a manufacturing and service presence in the area gives credibility to the sales effort in Asia – whether the units are made in China or the United States; (2) China’s burgeoning market can only be assessed by a long-term commitment, and (3) lower labor costs associated with production in Asia also allows Formtek to recapture some market segments seemingly lost to imports. Of course, lower costs allow Formtek to compete with lower cost foreign manufacturers in the U.S., to fund strong product development and improvement programs and to mitigate price increases in its standard lines, like when steel costs rose over 100 percent in 2004.

That is just one example of the type of synergy that parent company Mestek anticipated when it moved to create Formtek. Mestek is a leading Massachusetts-based family of manufacturing companies that provide heating, ventilating and air conditioning products as well as metal forming devices.

A historic line-up
In 1964, Mestek acquired Peterson Roll Feed Co., and after 10 years Mestek merged Peterson with Cooper-Weymouth to form CWP or Cooper-Weymouth, Peterson, a Maine-based company with more than a half-century of experience in providing the metal stamping industry with high performance coil processing equipment.

Scheel notes that the Formtek corporate strategy was developed in the 1990s to slowly build the unit through acquisitions of well-known metal forming companies. Over the years, Formtek has added 13 other units through acquisition or start up to the original Cooper-Weymouth, Peterson unit. Some of these companies are distinguished with the oldest and best-known names in the industry, like Yoder Manufacturing. Yoder was founded in 1910 and is the pioneer of roll forming and tube mill technology. Today, Yoder is Cleveland-based along with other Formtek brands including Dahlstrom Industries, and B&K, the manufacturers of a so-called “super mill” for steel framing.

“We didn’t look to buy companies that were not known in the trade,” said Scheel, in describing the creation of Formtek. “We looked at forming a group of only the top companies in metal forming and metal-fabricating machinery in the world.” Over time, according to Scheel, the company has organized itself into three groups, which are HVAC/sheet metal, metal forming & fabrication, and coiled metal processing.

Today, some of the brands that the group includes are the The Lockformer Company, a leader in heating, ventilation and air conditioning fabrication equipment through its Vulcan plasma cutting systems and other technologies; Iowa Precision, based in Cedar Rapids, which is also a leading supplier to the HVAC contractor, and Engel Industries in Bridgeton, Mo., which is a leading supplier of quality metal forming equipment. Last year, Formtek also acquired the operating assets of Tishken Products Co., based in Detroit, which makes roll-forming machines, edge conditioning machines, strip thickness sizing machines, carbide saw-mill machines, cutoff presses and roll form tooling and dies.

The company has also moved to fill several holes that it saw in the marketplace. For example, Formtek opened Iowa Rebuilders Inc., also in Cedar Rapids, to perform rebuilding and reconditioning services on Iowa Precision and Rowe machines. Formtek executives said at the time that they’d found a significant demands for equipment restoration from customers.

Coast-to-coast strength
Because of the diversity of product that is manufactured by Formtek, Scheel noted that the company is able to build upon whatever sectors of the economy are strong, even in differing regions of North America. Right now, he noted, there is considerable work on large public works projects in the Boston area, a new wave of school building projects in the greater Chicago region, and builders seeking architectural metal items in the Long Island market. Metal construction products and metal office furniture have also shown strength recently.

“We know our markets at Formtek and we know what we’re good at,” Scheel said, noting that the company’s most recent marketplace intelligence calls for a continued strong market in building warehouses and distribution centers in the Southeast as well as heavier than usual activity in the San Francisco Bay area for new healthcare facilities as well as commercial building.

Scheel said that an additional benefit of pulling together so many different units is that engineers and other innovators from the multiple brands routinely share information, so that the other subsidiaries will benefit from one unit’s latest technological advance. “R&D has never stopped – there’s a huge skill level in each of these brands.”

But in the end, Scheel said that the ultimate strength of Formtek is not so much in its units as in its customers. “We try to do what our customers tell us to do,” he said. “We’re good listeners.” “In the end, we hope our customers believe that their association with Formtek means that they were able to make their products better, safer and more efficiently.”