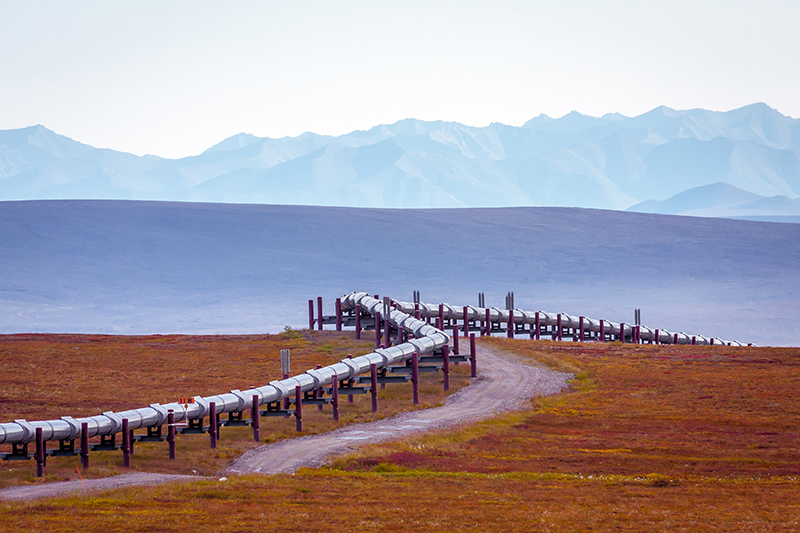 In his first address to Congress in February, President Trump invoked construction of the interstate highway system under President Eisenhower as “the last truly great national infrastructure program.” Expanding U.S. energy infrastructure – the interstate transportation system for moving oil and natural gas – could be the next one.

The United States now leads the world in the production and refining of oil and natural gas, and keeping pace with new production trends requires updating the energy infrastructure network, including pipelines, storage, processing, rail and maritime resources. Prior to America’s 21st century energy resurgence, transporting imported energy from the coasts to points inland was the priority. That’s all changed. According to a study from Energy Policy Research Foundation, Inc., shipments of crude oil from the Gulf of Mexico to the Midwest decreased 500,000 barrels per day (b/d) between 2008 and 2013, while shipments from the Midwest to the Gulf jumped from just 50,000 b/d to over 380,000 b/d.

With production growth in areas like the Midwest and Pennsylvania, expanding our pipeline system will ensure we move energy efficiently, maximizing the economic and environmental advantages of our status as a world energy leader.

For shovel-ready jobs that don’t rely on taxpayer dollars, it’s hard to beat energy infrastructure. Infrastructure investments in the oil and natural gas sector could spur up to $1.15 trillion in new private capital investment over the next 10 years, support 1.15 million new jobs and add $120 billion on average to national GDP.

Examining just two prominent infrastructure projects – the Dakota Access and Keystone XL pipelines – illustrates the job creation potential. The Keystone XL pipeline, which would transport oil from Canada and the U.S. Bakken region, would create about 42,000 jobs and generate $2 billion in earnings during construction. The recently completed Dakota Access Pipeline is a $3.78 billion investment linking the energy- rich Bakken and Three Forks shale plays in North Dakota with major refiners in Illinois. The 1,172-mile project was projected to support 8,000-12,000 jobs across four states and generate $156 million in sales and income tax revenues reflecting economic activity across a range of businesses.

Increased investment in the country’s energy infrastructure will increase demand for industries such as steel, machinery and engineering services, and could trigger an estimated $45 billion per year of economic activity throughout the supply chain.

Then there are the continuing economic benefits provided by the products energy infrastructure delivers. The White House National Economic Council reported last year that the “surge in American natural gas production has lowered energy costs for manufacturers and driven job growth, with U.S. natural gas costs one-half that of Europe and one-third that of Asia.” Oil and natural gas serve as building blocks for a wide range of products, and producers of steel, chemicals, refined fuels, plastics, medicines, fertilizers and numerous other products have seen their power and materials costs drop due to affordable energy. According to a recent study from the Boston Consulting Group, U.S. industrial electricity costs are 30-50 percent lower than those of our foreign competitors. American manufacturing costs are now 10 to 20 percent lower than those in Europe and could be 2 to 3 percent lower than China’s by 2018.

That’s a competitive advantage America’s manufacturers can invest into expansion, and jobs. According to the American Chemistry Council, energy has sparked a “manufacturing renaissance.” Chemical production grew 1.6 percent in 2016, and production is expected continue to increase through 2020 as new capacity from 264 announced projects and over $164 billion of investment comes online. As ACC President and CEO Cal Dooley has stated, “The United States has become a magnet for chemical industry investment, a testament to the favorable environment created by America’s shale gas as well as a vote of confidence in a bright natural gas outlook for decades to come.” National Association of Manufacturers Vice President of Energy and Resources Policy Ross Eisenberg concurs, calling oil and natural gas production “a boon for manufacturing growth and productivity in recent years.” “For manufacturing to succeed,” Eisenberg noted, “access to reliable and affordable energy is essential.” A 2013 IHS study found that energy from shale and other tight-rock formations supported 2.1 million jobs in 2012, and that number is projected to increase to 3.9 million jobs by 2025, including 500,000 manufacturing jobs.

Reliable access to energy has also helped drive down utility, product and other energy-related costs for families, contributing to a $1337 boost to the average American household budget in 2015.

The ability to take full advantage of the benefits of affordable energy hinges on infrastructure to deliver it. The northeastern U.S. — home to seven of the top 10 most expensive states for electricity costs — demonstrates that pipeline constraints can be costly for consumers and manufacturers. Despite being a short drive from Pennsylvania’s Marcellus shale — one of the world’s largest natural gas supplies — residents of the region paid up to 68 percent more for electricity than the national average in the winter of 2014, while industrial users paid up to 105 percent more for electricity than the national average, according to the U.S. Energy Information Administration (EIA). Failure to expand natural gas and electricity infrastructure in the Northeast could cost the region’s households and businesses an estimated $5.4 billion in higher energy costs and more than 167,000 private-sector and construction jobs between 2016 and 2020, according to a study from the New England Coalition for Affordable Energy. Expanding pipeline infrastructure to connect the region’s power plants to natural gas could lower utility costs and create thousands of construction jobs.

Access to clean-burning natural gas also helps reduce greenhouse gas emissions – a fact often overlooked in debates about infrastructure development. Carbon emissions from electricity generation reached 25-year lows for the first half of last year due primarily to greater use of clean-burning natural gas, which is now the leading source for power generation. Greater use of natural gas has also significantly reduced emissions of hazardous air pollutants like nitrogen oxide, sulfur dioxide, mercury and particulate matter. Pipelines are also one of the safest, most efficient ways to transport the energy families and businesses need. The most recent data show that both liquid pipelines and natural gas pipelines transported crude oil, petroleum products and natural gas at a safety rate of 99.999 percent.

Add up the variety of benefits generated by energy infrastructure development – from emissions reductions to consumer savings, from immediate job growth during the construction phase to sustained economic benefits for families and manufacturers – and it’s easy to see why 81 percent of American voters support increased energy infrastructure development.

Robin Rorick is the group director of Midstream and Industry Operations at the American Petroleum Institute. Rorick joined API in 1996 and for the last five years has worked as API’s Director of Marine and Security, with responsibility for maritime transportation issues and emergency response.

In his 20 years at API, Robin has worked in various capacities in Communications, Regulatory and Scientific Affairs and Policy Analysis. Additionally, Robin has been involved with each segment of the industry—Upstream, Midstream and Downstream—working on a myriad of issues including climate change, Clean Water Act, Clean Air Act, the Toxic Substances Control Act, and fire and safety to name a few.

Robin is responsible for all energy infrastructure issues for the Institute including the gathering, processing, storage and transportation (i.e. marine, pipeline, rail and trucking) of oil and natural gas. Robin regularly represents the API to the media, at conferences and at other speaking venues.

A graduate of the College of William and Mary and then later Johns Hopkins University, Rorick lives with his family in Fairfax, Virginia.