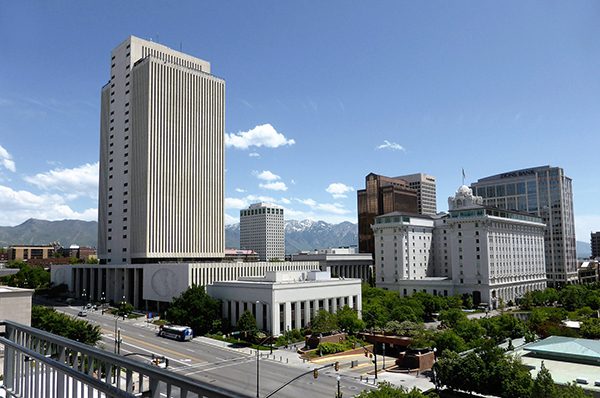 The United States imports a lot of goods, and these imports must enter the country through a few seaports. Often, these seaports become bottlenecks; in addition to offloading freight, they must function as distribution hubs. This involves unloading shipping containers, repackaging, and shipping along many different spokes leading to thousands of destination towns and cities.

An inland port alleviates the bottleneck. At the seaport, cranes can sort shipping containers. For those destinations now serviced by the inland port hub, containers can be loaded directly onto a freight train. The train spur takes cargo directly to the inland port, where it clears customs and gets processed and distributed.

“A Salt Lake City port makes sense for many reasons,” says Natalie Gochnour, adding that “more research is needed to determine conclusively if it’s in Utah’s best interest.” Gochnour, in her capacity as Director of the Kem C. Gardner Policy Institute at the University of Utah, produced a preliminary feasibility study on the subject. The August 2016 “Salt Lake Port Market Assessment,” commissioned by World Trade Center Utah, concludes that “Salt Lake County meets many of the essential criteria for developing an inland port.”

Factors favorable to a Salt Lake City inland port fall into two broad categories: those internal to Utah, and those involving Utah’s proximity to other regions. In the former category, Utah boasts a strong economy and cheap labor relative to coastal labor pools. Additionally, the report cites “recent [favorable] land use decisions,” namely, the controversial decision to relocate Utah State Prison near the proposed port site. Proponents believe “the development of a prison and inland port are complementary.” The significant infrastructure needed to support the prison can service the port, and vice versa.

External to Utah, the inland port will change distribution and logistics for the entire Western US. “We’re almost exactly in the middle, between a lot of major population centers,” Gochnour explains, gesturing at a map. Indeed, Los Angeles, San Francisco, Portland, Seattle, Boise, Denver, Albuquerque, Phoenix, and Las Vegas all fan around Salt Lake City at various distances.

Gochnour’s report emphasizes that “the [Salt Lake City] area benefits from direct rail connection to all major west coast terminals and access to major interstates in all directions.” Look at a railroad map: Salt Lake City has the most spokes of any hub west of the Great Divide. Or, consider freeway transport; within a single driver shift, trucks can reach any part of the Intermountain West, and even some coastal areas. Then there’s air freight: Salt Lake City International Airport, currently undergoing a $1.8B expansion, is Delta’s fourth-largest hub; the airline moves over three million pounds of cargo through Salt Lake City annually.

In other words, Salt Lake City is already a multimodal transportation center. Perhaps it is for these reasons that several companies have established significant logistics operations in Utah. Among these are Overstock.com, eBay, and Orient Overseas Container Line (OOCL), which chose Salt Lake City as its North American headquarters. An inland port would likely draw much more industry to settle in the area, as proximity to the port would be a logistical boon.

An inland port would multiply Utah’s cargo and goods traffic many times over, making current volumes appear miniscule in comparison. Salt Lake City would sit on one end of a logistics barbell, with a seaport on the other end; a robust rail line would form the “handle” connecting the two ports. Incoming containers would bypass customs at the seaport, traveling straight for the inland port instead of being parceled out. At Salt Lake City, containers would be unloaded and all goods would clear customs. Post-customs, goods could be warehoused and shipped on via rail, air, or truck.

Naturally, the inland port would be a massive operation — some inland ports handle “as much cargo volumes as their coastal counterparts,” per a report by Jones Lang LaSalle — and would demand a significant infrastructure investment. We’re talking about dockyard cranes. Vast storage capacities. Clearinghouses. A foreign trade zone. Major surface road access to the port. And much more. Additionally, environmental impacts must be factored.

Which is why Scott Anderson, CEO of Salt Lake City-based Zion’s Bank, calls for “an in-depth feasibility study” to analyze “the market opportunity; economic and fiscal impacts, infrastructure investments required; port governance options,” and a number of other factors. Anderson, for one, finds the Kem C. Gardner preliminary study convincing enough to take the next step. “Scaling back economic initiatives is a path to certain economic stagnation,” he says. To be sure, an inland port would increase trade and drive off stagnation. Now we need the detailed cost-benefit analysis.