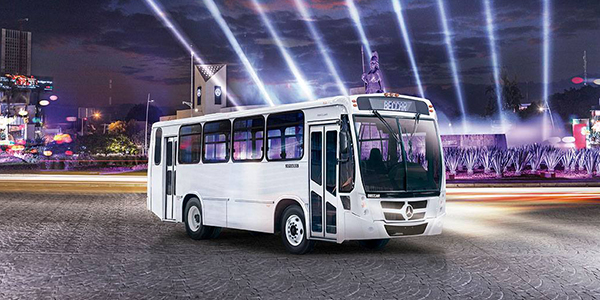 Read about the firm’s 30 years of experience, as well as the strategies it uses to continue paving the way for the future of buses in Mexico.

It may have started out small, but today, CARROCERIAS HERMANOS BECERRA, S.A. de C.V., operates in a big way. “Because of our emphasis on design, we’ve been able to work with large companies to produce buses for urban transportation,” notes Julian Becerra, CEO of the company.

The company, also known as BECCAR, leads the Mexican market in the design of urban and intercity buses, and is the only one to oversee such a wide variety of models. In addition to its current products, BECCAR is currently working on large projects involving vehicles for PRT, an automated transportation system.

The company has several subsidiaries as well. It works with CARGABE, which offers cargo services. It also oversees TRANSPORTADORA BECTOURS, which carries out bus tours. Another subsidiary is SERVIBUS, which offers bus repair services.

BECCAR is situated in the city of Zapotlanejo, in the central Mexican state of Jalisco. The company has more than 600 employees, and currently produces approximately 920 units each year. The company’s current plant covers an area of 20 hectares.

The company got its start in 1984, when four brothers opened a shop to fix buses. All of them had experience in repairing buses, and their new business grew quickly.

By 1987, the company had established itself as a bus repair shop. That same year, it took on a new direction, when it designed a bus known as ALCE. This model specialized in transportation between cities. The ALCE quickly gained recognition in the Pacific zone of Mexico, and helped the company’s name become well known in the surrounding regions.

In 1992, the company took on the name CARROCERIAS HERMANOS BECERRA, S.A. de C.V. It also opened a plant for design and production processes, and started its first assembly line.

BECCAR entered the urban segment of buses in 2002, and produced a number of new models for this particular market. Three years later, the company was able to cover the design, engineering, manufacturing process, and additional technical processes for its products. This step made it possible for BECCAR to offer clients a complete solution, resulting in high quality, fully assembled units.

The company increased its installations by 38 percent in 2008. This gave it a production area of 50,000 square meters. In addition to an increase in capacity, BECCAR invested in the latest technology. That same year BECCAR received the recognition as the 2008 Company of the Year in its state of Jalisco.

The new installations gave the company the ability to produce new models for the market. In 2011, it received the 2011 Successful Company award from the Secretary of Economy in Mexico. Today, the company has more than 60 different models of buses operating under various brands.

While the company has a leading presence in Mexico, it is also in the process of branching out into additional countries. BECCAR has carried out initial testing in places such as Venezuela to try out new markets and research areas for potential future growth.

Today the company designs bodywork for well-known international companies, including Mercedes Benz, International, Isuzu, Scania, Volkswagen, and Man, among others.

Among BECCAR’s top models is the URBI, which is designed for city movement. It also produces URVIABUS, a bus known for its safety and visibility in the city. It offers plenty of space for passengers, comfortable seating, and a structure that is lightweight and durable.

The URBUS model is designed for city transportation, and stands out for its safety features. The model is also compact and lightweight.

The company also produces a model known as B330, which is designed for short distance travel between cities. The B330 has an aerodynamic design that saves on fuel costs. As one of the company’s latest products, it has quickly gained a foothold in the market.

In recent years, the company has actively pursued growth, including a focus on improving production facilities. “We’ve invested in additional machinery and structures,” notes Martin Murguia, director of operations at the company. The company has a $3.5 million project underway. The plan includes expanding warehouses for materials and accessories, increasing production areas, and creating a larger space for designing new products.

This emphasis on investment has already led to some results at the production level. “In the last five years, the plant has increased in capacity and installations by 35 percent,” says Murguia. Furthermore, “We’re in the process of getting ISO 9000 certification.”

In all of its operations, BECCAR is committed to developing systems that ensure safe, efficient, and reliable movement for all passengers.

In addition to providing a smooth, safe ride for those who travel on its vehicles, BECCAR takes a variety of measures to look after employees. “We collaborate with workers to help them continue their studies,” says Murguia. The company also has a program to help employees own their own home.

Each Father’s Day, the company sets up a soccer tournament for its workers. At the end of the year, it holds another gathering for workers. “During this annual event, we celebrate and show appreciation for our employees,” notes Murguia.

Furthermore, the company offers a scholarship program to help support and encourage the school-aged children of its workers. Schoolchildren who keep a certain grade point average, or higher, receive a scholarship from BECCAR to help cover education costs.

This year, BECCAR is celebrating its 30th anniversary. As part of the celebration, the company has plans to set up a cultural week. During the week, social activities, cultural events, and sporting activities will be provided, notes Becerra.

BECCAR also involved in several eco-friendly projects. “We’re very committed to the environment,” notes Becerra. The company has a program in the works that oversees the management of green, vegetation-filled areas. It also has a program to help promote turning organic materials into compost.

The company foresees growth in the next years. “The B330 has been doing quite well in the market,” says Murguia. “This puts us in a position to increase the capacity of the plant to better focus on that product.”

In the coming years, the company also plans to launch new designs and products, including the PRT system, into the Mexican market. The continual focus on innovative products, coupled with the safety and wellbeing of both passengers and workers, will help BECCAR lead the way in the Mexican transportation arena during the coming years.