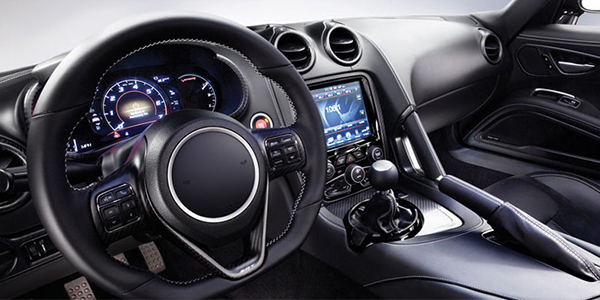 How fast are you driving? How much gas do you have left to keep going? Are the high beams on or off? Drivers take the display of such basic information for granted and rarely give a second thought as to how it’s all put together. But there’s a lot of precision design and engineering that goes into making a car instrument panel that not only provides a wealth of organized data at a glance, but integrates stylistically and functionally with the car interior – and without becoming a potential source of squeaks and rattles.

Intertec Systems, headquartered in Troy, Mich., combines design and manufacturing acumen with an ownership that uniquely positions it to flag accelerating results in supplying instrument panels and related systems to such North American-based auto makers as DaimlerChrysler, Ford, GM, Toyota, Auto Alliance and others.

The company was founded in 1985 as a joint venture between Woodbridge Foam, a Canadian manufacturer of urethane seat foam, and INOAC, a Japanese manufacturer of polymer products and one of the largest independent instrument panel manufacturers in Asia; it eventually took over full ownership. It formally began operations as Intertec Systems with INOAC joining up with partner Johnson Controls Inc. (JCI) in 1996, a global manufacturer of automotive interior systems and parts, facility management and controls based in Milwaukee, Wis.

Formula for Effective Competition
“It’s a great formula for us,” says Ronald Carzoli, vice president of sales and business development, “because North American automakers such as GM and Daimler-Chrysler contract with Johnson Controls to provide either the entire automotive interior system or an instrument panel cockpit system; Johnson Controls in turn relies on us exclusively for the design and development and supply of instrument panels and associated trim. In fact, we have our manufacturing functions directly integrated into certain Johnson Controls plant operations. So they’re not only an owner, but also a major customer.”

He continues: “Intertec Systems also does a lot of work with Asian manufacturers here in North America and INOAC is a great resource for us to understand their culture and to develop higher comfort levels that lead to close partnering. INOAC is also a leading developer of new polymer technologies, the basic building material of instrument panels, so we’re able take advantage of these new and future capabilities.”

Currently, Intertec Systems has 700 employees, with manufacturing operations in St. Mary’s, Ontario, Canada, and in Bardstown, Ken. A section of Johnson Controls’ manufacturing plant in Ramos Arizpe, Mexico was dedicated to Intertec Systems in 2001 to produce an instrument panel for the Buick Rendezvous that is the first of its kind to feature a seamless air bag door with a vacuum form TPO skin and polyurethane foam. Intertec Systems also recently formed partnerships for future production in San Leandro, Calif. to supply Fremont; Calif.- based New United Motor Manufacturing, Inc. (NUMMI). This joint venture of GM and Toyota produces the Pontiac Vibe, Toyota Corolla, and the Tacoma truck; most recently, Intertec Systems was awarded the contract for new interior trim parts

“Error Free” Manufacturing
The objective of any manufacturing process, Carzoli says, is to develop “programs without major issues at launch and in manufacturing.” To that end, Intertec Systems follows the tenets of a disciplined product development process known as “PLUS” that was originated at Johnson Controls and establishes procedural “gates” that can’t be exited until certain criteria are completely fulfilled. “By successfully achieving the PLUS systems criteria we will stay on target,” says Carzoli.

While Carzoli points out that, like any other industry, “everyone’s looking for the lowest prices,” design and technology are equally important considerations.

For the Big Three Detroit automakers, Intertec Systems provides support with a combination of in-house and contract designers. But for some transplant projects Intertec Systems can also call on INOAC to support design and development that takes place in Japan as well as here in the U.S.

“In addition, our relationship with Johnson Controls allows us to share common research and design studios to develop complementary solutions for effective IP and cockpit systems,” he says. “Similarly, INOAC is the market leader in the polymer products that comprise instrument panels. So we don’t really need a big R&D department because we have access to the leading R&D departments of our ownership. We can then focus our application development on this R&D activity and bring flawless product to market.”

High Performance Integration
One example is a recently launched North American application High Performance Integration (HPI). This technology was used for the first time by Auto Alliance International, a joint venture of Ford and Mazda, and the company’s all-new 2003 Mazda6 sports sedan on the instrument panel. Indeed, Intertec Systems was recognized by Ford with a 2002 World Excellence Silver Award as one of its top suppliers based on its quality delivery and cost performance for the Mazda6 instrument panel. Intertec Systems also enjoyed recognition for its HPI technology by being among the 23 finalists for the automotive industry prestigious PACE award.

Originally developed by INOAC, HPI technology has been used in Japan for several industry-leading vehicles produced by Toyota, Lexus, and others, all of which scored well by J.D. Power and Associates. This year, Intertec Systems won the Society of Plastics Engineers (SPE) Automotive Division’s 33rd Annual Innovation Award in recognition of its use of HPI technology on the Mazda6. HPI technology offers unique advantages in styling and fit and finish, while reducing unnecessary waste in the process. Integrating components into the instrument panel that are conventionally separate parts achieves significant quality enhancements, reduces buzz squeak and rattle and most notably improves overall craftsmanship. Additional benefits include a cast skin that provides superior grain definition, multiple grain capability and sharper radii compared to a conventional vacuum formed process. It also enables the stylist to design soft only in strategic zones where the customer gets the most value “The industry is looking for greater value for fewer dollars. One way to achieve that is through part integration and a higher level of craftsmanship like HPI” Carzoli says.

Solutions Orientation
Some of the current trends are sharper radii/definition, two tone, and seamless air bag door designs as well non-PVC solutions. Says Carzoli, “A lot of these trends are the result of both us and our customers benchmarking European vehicles that have the most desirable craftsmanship characteristics. Our focus is to replicate this high level of execution in the most expensive European vehicles, while providing more effective cost solutions so it is available to a broader automotive price spectrum. We are thrilled that we have been able to provide these solutions for our customer programs that have been recently launched.”
“We’re not just supplying a component, we’re providing solutions,” adds Carzoli. “We’re looking to fulfill needs that benefit consumers with better aesthetics, a high level of craftsmanship, durability and improved safety.”

Being a design and technology leader has certainly put Intertec Systems on a winning track. Intertec Systems is gaining increasing momentum on the large North American instrument panel segment leaders, such as Visteon and Delphi, which have the lion’s share of the market.

“For the last four years we have seen increased revenues that are projected to continue through 2006 based on booked business,” Carzoli remarks. On the speed-ometer of success, that’s a good speed.