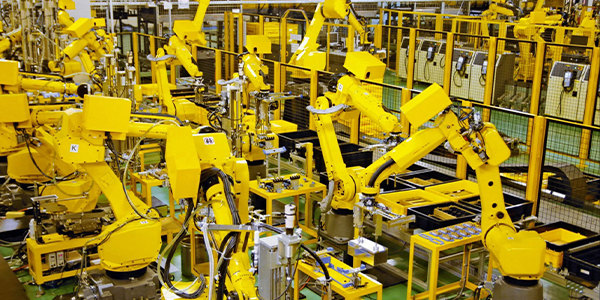 In reviewing the U.S. government’s list, a majority of the initiatives will take a great number of years to accomplish. The one area in which manufacturers could secure results immediately, while maintaining control, is the use of innovation and product enhancing technology. The state of the manufacturing community has changed. Quality and efficiency have become essential, which has shifted the focus to lean manufacturing and the Six Sigma process. Automation and robotics are also credited with improving efficiency and quality.

Some manufacturers are concerned investing in automation and innovation will displace workers. The fact is, if manufacturers do not innovate and embrace automation, they will leave themselves open to loosing their entire facility, company, or worse, to outsourcing.

A similar analogy can be drawn with the U.S. Steel Industry. The number of U.S. workers employed by the U.S. steel industry dropped by 74 percent from 289,000 to 74,000, while increasing output by 36 percent from 75 million tons to 102 million tons.

In both examples, the number of workers fell, but productivity climbed. In manufacturing, the choice has been to outsource work to countries with low cost labor. The message is clear. We must make way for advancing technologies or the North American manufacturing industry is in trouble.

Embrace automation
The “Save Your Factory” campaign encourages North American manufacturing companies to recognize automation and robotics as more cost effective and profitable alternatives to off shoring. This can be done by focusing on innovation.

There are numerous factors to consider when moving manufacturing operations overseas including factory efficiency, inventory requirements, the strength of our labor force, government support and stability, supply chain strength and intellectual property protection, among others. Producing products in other countries such as China also provides challenges in maintaining high quality parts. Counterfeiting costs the global automotive parts industry $12 billion a year; $3 billion of that total is in the United States. In addition, according to the U.S. Embassy in Beijing, companies investing in the Chinese market underestimate the market situation, failing to perform risk assessments and seek council. This allows investors to fall into bad business deals, resulting in lost investments, making doing business in China a risk.

“Save Your Factory” encourages companies to weigh these unknowns and investigate opportunities within their current facility to assist in remaining competitive. All data support the fact that through automation, robotics and other lean manufacturing operations, North America can be cost competitive with countries like China.

Several factors that are directly impacted include: quality, efficiency, increased control and viability. An automated facility manufactures the highest quality products, enabling manufacturers to optimize current capital, labor resources, maintain control of their operations, strengthen North American manufacturing leadership and retain jobs, all while leading to significant cost improvements. Industrial robots provide a number of direct and indirect economic benefits. One robot can perform the work of three to five people, reducing the cost of labor. Over the next three decades, 76 million baby boomers will retire and only 46 million new workers will be available to replace them. The demand for labor will continue and automation is the answer.

Cost is an important factor in choosing to move a factory overseas. There is key evidence that demonstrates automation and robotics can provide the cost savings companies are looking for without outsourcing. Lincoln Electric, the worlds’ leading designer and manufacturer of arc welding products, robotic welding systems, and plasma and oxyfuel cutting equipment recently worked with a customer who was considering moving their factory overseas. Lincoln Electric’s cost analysis of part production in China versus the cost of automation, found its customers’ manual process resulted in a cost of 84 cents per part. When the company investigated producing the part in China, it was 30 cents per part. Investing in robotic welding in the U.S. also cost 30 cents per part.

In addition, robots help manufacturers optimize equipment cell layout, floor space use, work piece flow, and flexibility. In addition, robotics eliminates human error, reducing handling accidents and losses and can be in used in a variety of applications and locations.

Another example of how robotics assisted in strengthening a company is demonstrated through Mennie’s Machine Company. A manufacturer of automotive drive shaft components for sport utility vehicles and full size trucks, Mennie’s Machine Company invested in robotics to meet its customers’ demands for speed and quality. The company created a “factory within a factory,” including a series of robotic work cells linked through a common part transfer conveyor. The fully automated system incorporates material handling robot models equipped with HandlingTool and Collision Guard Software, customer grippers and a control interface. The entire system consists of 10 consecutive processes linked by a conveyor.

Production quality also was addressed by tracking scrap dollars. During final inspection, each part is examined for dimensional tolerance and cosmetic appearance. Rejects are tagged and then further evaluated to determine how to eliminate inaccuracy. Robotic automation has contributed to a reduction in scrap rates. The three-shift operation is running at 95 percent uptime, a 15 percent increase over the previous manual operation. The robotic system has helped to reduce total production costs by approximately 25 percent.

Automation and robotics provide a variety of benefits to the manufacturing community including improved efficiency, better quality, reduced piece price, minimized risk and improved control of operations. Of all the forms of automation, robots prove to be the most flexible and offer more opportunities for companies to maintain profitability.

To create a successful initiative, a coalition of supporters is being formed, including manufacturing leaders, associations and government officials. Through our resources, including the Save Your Factory Web site (www.saveyourfactory.com), and our partners, we will spread the message that keeping manufacturing operations in North America is critical for North American manufacturers to be competitive in the world market.