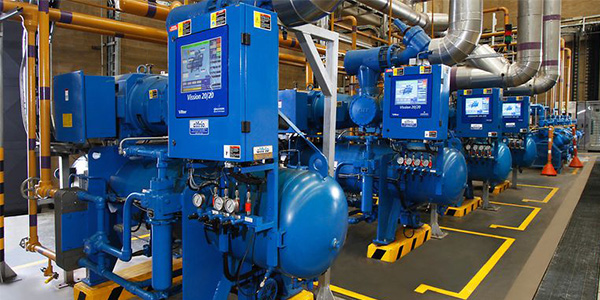 While necessity may be the mother of invention, Vilter might be called the father of innovation. From the time Ernst Vilter first improved a Corliss steam engine in 1879 through the introduction of the single screw compressor in 1990, Vilter has developed a reputation for providing its customers with dependable products and innovative technology.

The single screw compressor is a rotary, oil injected, positive displacement machine that can operate with any of the commonly used refrigerants. Gas enters the compressor through a suction connection and flows into the open ends of the grooves in the main rotor. Rotation of the main rotor causes the teeth of a gate rotor to enter the open ends of the grooves, which closes off the groove and creates a compression chamber. As the main rotor continues to rotate the gas trapped in the groove is compressed as the teeth of the gate rotor sweeps through the groove. While one gate rotor is meshed with the main screw and compressing gas on one side, a second identical process is taking place with another gate rotor on the other side. This yields opposing forces which are totally balanced, resulting in zero net forces on the main rotor bearings, which increases the life of the bearings dramatically. The addition of Vilter’s exclusive Parallex ™ twin slide valve arrangement allows the compressor to run at peak efficiency at any load step. What does all this mean? Higher performance than twin screw compressors, and fewer moving parts than reciprocating compressors. Fewer parts means less wear and tear, less maintenance and longer reliability. Vilter offers a five-year warranty on its single screw compressors, and a 15-year warranty on the bearings, the industry’s longest. Vilter screw compressors are less expensive to operate and are more energy-efficient than any other kind of compressor. Vilter Manufacturing is on the cutting edge of compressor technology.

Cutting Edge is the Norm

The company has a long history on the cutting edge. Founded in 1867 by Peter Weisel and Ernst Vilter, the company supplied steam engines to Milwaukee industries. In 1882 the company began producing a horizontal compressor driven by a Corliss steam engine. These compressors, driven by steam and more efficient than their vertical counterparts, ushered in the dawn of industrial refrigeration. Gone were the suppliers of natural ice. If ice were needed, it would be made by a machine rather than Mother Nature.

Peter Weisel retired in 1893 whereupon Theodore Vilter, Ernst’s son, became president. Upon his death in 1919, Emil Vilter succeeded him and was president until 1934 when William Vilter assumed the position. William’s death in 1944 brought ownership and management changes to the company. In 1949 A. A. Silverman was elected president. He directed the company until his retirement in 1992 when Paul Szymaszek was elected and continues in the position today. Since 1988 Vilter Manufacturing has been 100 percent owned by its employees through an Employee Stock Ownership Plan (ESOP).

A string of successes has followed the company right from the beginning. In 1910, the Santa Fe railroad contracted with Vilter to design an ice-making, pre-cooling plant to produce 225 tons of ice needed to chill 150 carloads of fruit daily. In 1917, General Pershing and the War Department needed a 500-ton ice plant to store 5,000 tons of beef for the troops in Europe. Vilter built it. During World War II, the company built pack ice machines for use in steam ships moving food stuffs to troops in both Europe and the Pacific. In 1945 Vilter introduced the VMC 440 reciprocating compressor which quickly became the refrigeration industry standard. This was followed by the 320 in 1962 and the 450XL in 1985. In 1982 Vilter acquired Gebhart Industrial Refrigeration and began offering stainless steel and galvanized coil cooling units. In 1990 the company introduced the VSS 601 single screw compressor, to be followed by seven more models in various sizes. The latest new size models are expected by March of 2000.

You’ll find Vilter equipment used throughout the world, from the smallest cold storage room to huge food processing operations. Vilter is relied on to satisfy the sophisticated cooling needs of the petrochemical and pharmaceutical industries as well. Ice rink operators use Vilter equipment to produce high quality skating surfaces for hockey games, ice shows and recreational use. Whenever dependable, high-performance refrigeration is needed, Vilter is the name to rely on.

Vilter is a global company and participates in all major international markets. Vilter’s Fortune 500 customer base requires direct corporate sale and support to many foreign operations, regardless of where located. The company is licensing technology to entrepreneurs in developing countries with expanding market potential. These are but a few of the approaches used by Vilter as it continues more than 100 years of exporting refrigeration and compression equipment. These efforts were recently rewarded as Vilter won the 1999 Wisconsin Governor’s Award for Excellence in the development of export markets with Wisconsin products.

The future looks bright. A recent major investment in a special facility within the Cudahy plant, the “White House” as it’s called, allows the manufacture of highly engineered components of single screw compressors, the main rotor and the gate rotor. The Vilter White House is a climate controlled machining center located deep within the manufacturing complex. The investment has quickly paid off in faster product turnaround times and superior quality control.

At the recent International Institute of Ammonia Refrigeration conference Vilter proved it’s innovative reputation once again by introducing several new products and services as well as the industry’s longest warranty, five years, on its screw compressors. The Vilter ViSSion micro-controller is a touch screen control system designed to provide customers both flexibility and the latest in micro-controller technology. New compressor selection software, RecipPro and ScrewPro, will soon be followed by VesselPro, EvapPro and AirPro for a complete line of Vilter software products featuring quality Vilter equipment.

Another successful chapter is beginning in the history of Vilter Manufacturing. The company is confidently changing to keep pace with the demands of the new millennium, embracing new technology and new ways of doing business. The most respected brand name in industrial refrigeration expects to shine brightly into the future.