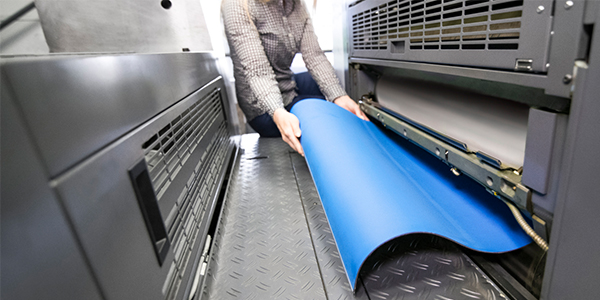 Star Trek’s venerable Vulcan, Spock, had more of an impact on society than just sometimes-campy 1960s TV sci-fi; it turns out that in the printing world, the name Vulcan means a whole lot.

Just ask Kazumasa Takeuchi, printing manager at Nishikawa Printing. On the Web site of Japanese Gadelius, a group that specializes in distributing technology and products, Nishikawa’s printing manager attests to the effectiveness of the Reeves printing blanket, which enabled Nishikawa Printing to not only solve a tricky technical problem, but achieve higher print quality. “Vulcan has proven itself in our actual operations. We are now running six presses equipped with Vulcan blankets,” Takeuchi says.

Such acclaim is not isolated – throughout the rest of the world Reeves has made a name for itself, coming a long way from its founding in the 1920s when it placed its coated fabric handprint on a range of textiles, even London Fog raincoats. “Reeves was founded as a fabrics company,” explains Vice President of Sales and Marketing Ken Branham. “In the early years it made all kinds of textile products and we became one of the largest producers of coated fabrics in the world because we became very good with understanding how to put coatings on fabrics.” The company further evolved in 1940 when it was the first in the world to develop a gas meter diaphragm, a very specialized coated fabric diaphragm that meters gas. “We have a large global market share in this area,” Branham notes.

Reeves has since evolved into a global provider vertically integrated to weave and coat engineered fabrics. Its products are manufactured and supplied through its Printing Products Group, specializing in offset printing blankets and its Engineered Fabrics Group, specializing in fabrics for the automotive restraints, aerospace, military, industrial, and specialty markets.

Blanketing the market
As one of the world’s largest and most diversified manufacturers of printing blankets, Reeves has more than 50 years invested in the printing industry, more experience than any other blanket producer. This knowledge, combined with innovative technology, patented processes, vertical integration, and total quality management, distinguishes the company from competitors.

“In 1964 we were the first to develop the modern day printing blanket,” Branham points out. The print blanket basically is the medium that enables the transfer of ink from the printing plate to the paper on the printing press. It is a highly specialized assembly, he explains, that looks like rubber fabric. “We are the second largest print blanket manufacturer in the world,” he adds. “Print blankets are used in offset printing presses – some morespecialized than others. The newest evolution is digital printing in which a computer changes an image. The ink is put on a cylinder and the computer image is transferred to the paper.”

Other ways in which the printing industry is evolving include advances in the print blanket itself – it used to be that the blanket was clipped to the press via two metal extrusions. Unfortunately, the metal got in the way of the printable area. “There’s been an evolution in the last few years to get away from a surface you can’t print on,” Branham says. “When you print tens of millions of impressions, if you can’t print on that quarter-inch, that’s a lot of wasted paper.” Reeves developed the Synthesis sleeve blanket to help eliminate the printing gap, saving paper.

To handle the many new demands in the printing arena, Reeves manufactures Vulcan brand offset printing blankets in the web, sheetfed, cylindrical, newspaper, business forms, metal decorating, and packaging markets. The Vulcan Reflection SRF blanket is the company’s top-of-the-line sheetfed and web offering. It features a closed-cell compressible layer that fights smashes, resists gauge loss and limits edge cutting when changing widths. The layer is also said to reduce doubling and slurring. The face of the blanket is composed of a solvent-resistant rubber blend in a dark-blue shade. The subface layer provides extra mechanical strength. Its fabric backing is water- and solvent-proof. The Reflection SRF blanket is available in three- or four-ply versions, with a fine buffed (SRF) or cast finish.

Another product is the Vulcan Alto, the result of a cooperative effort between Reeves USA and Reeves Italy. It is a compressible blanket suitable for high-volume publications and commercial printers, and is specifically designed for high-speed heatset web presses. Its low-stretch carcass is said to maximize on-press stability. It features a three-layer surface that is said to provide greater resistance to cuts, abrasions and smashes. The Alto also contains a closed-cell compressible layer, ensuring instant rebound and excellent performance. The face is composed of a solvent-resistant rubber blend and is green in color; the surface is buffed, enabling the production of full solids, sharply formed dots and rich contrasts. The fabric backing is water- and solvent-proof.

Each Vulcan offset printing blanket is uniquely engineered and extensively tested to ensure exceptional printability and long service life. “Because there are so many different types of printing presses you need to offer a number of products,” Branham stresses. “We don’t believe anyone has as wide a global offering as we do. Combined with technology and innovation this has set us apart. In the blanket industry we’re the only one truly global manufacturer.” Globally, he explains, four manufacturers make up 60 percent of the market.

“Within our engineered fabrics we provide material solutions to myriad industries from ground transportation to journeys into space such as high and low temperature gaskets that are oil and gas resistant for the space shuttle, to military helicopter de-icers and flotation devices and aircraft escape slides,” Branham notes. For example: a flexible fuel tank holding as much as 210,000 gallons is made of highly specialized coated fabrics. In the consumer marketplace, the company makes fabrics for components such as snow mobile belting to special gloves and in the medical arena, special HAZMAT coverings.

“This is a dynamic evolving global company,” Branham stresses, “that has literally become a world leader in coated fabrics and rubber sheeting through enhanced R&D and a sophisticated technology program.”