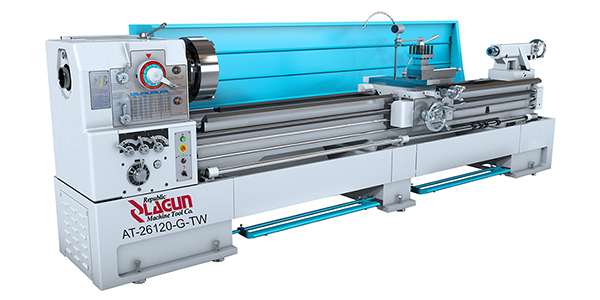 It all began prior to World War II in a small machine shop in northern Spain. There were just 15 employees and the first machine built was a bench type hand mill. Republic-Lagun’s beginnings, like many companies of that era, were modest. But through the years many other models of milling machines and engine lathes were added to its product line.
The company first introduced its products to the American market in 1960, shipping machines to importers who then sold Republic-Lagun machines under their trade name. By 1965, the company had a major expansion of its Spanish organization with a merger of other machine tool builders in Spain. Then, it was decided to establish an independent American organization and in 1968 Republic Machinery Company, Inc., was established in California. By 1972 the name was changed more to Republic Lagun Machine Tool Company.

American Made
In 1978, with the idea of selling special machines to United States government agencies and to build CNC machines, Republic-Lagun CNC Corporation was established as a separate entity. It started building explosion-proof machines for the Department of Defense. Using Spanish castings, and adding more than 60 percent American components, such as CNC controllers, ball screws, electronic components, special electrics, and engineering, the company was able to comply with “Built in America” standards.

The products subsequently evolved to more commercial and industrial applications, such as: aerospace, aircraft, automobile, mold and die shops, electronics, construction, and mining.

In 1998 the company began representing the Zayer Company in the U.S. (also from the North of Spain) with its fine line of CNC milling machines. The Zayer Company line of machinery includes CNC controlled bridge and gantry machines. Then, in 2000, Republic-Lagun introduced high precision, column type, automatic and CNC surface grinders to the American market manufactured in central Germany by Giebel and Hotz, the former builders of the Elb grinders.

Since Republic-Lagun’s establishment, these companies have increased their manufacturing facilities to more than 500,000 square feet. “Because of the acceptance of their products in the world market, our working force has grown to over 500 employees. Today, our success is seen in more than 45,000 vertical mills installed throughout the United States alone,” says Joseph Bezic, president of Republic-Lagun. “We offer not only our machines, but also accessories and a complete line of the most desirable tools on the market at competitive prices. It is our firm commitment to give quality and value along with dependable service, today and always. We stock over $3 million in parts and accessories. Today, proud customers owning a 30-year-old Lagun vertical mill know that parts to keep them running are readily available from our stock.”

Build it Right
Republic-Lagun CNC has manufacturing and sales facilities in Harbor City and Carson, Calif., both in the greater Los Angeles area. The Republic-Lagun line of CNC machinery enjoys wide acceptance among a broad range of customers within American industry and all over the world. Customers are found in the Department of Defense, various other federal, state and municipal government agencies, as well universities, colleges, and vocational training centers. Major industrial sectors represented among Republic-Lagun customers are the aerospace, aircraft and automotive industries; mold and die shops; high-technology and electronics; the construction and mining industries; and virtually any other industry that uses machine tools.

Every Republic-Lagun CNC vertical and knee-machining center is measured by laser for accuracy in the X, Y and Z axes over full axis travel. This verification data is then shipped with the machine’s documentation in order to confirm the performance accuracy of every machine produced. In addition, each machine’s circular interpolation accuracy is verified using the Renishaw® Ballbar plotting system. This, along with a battery of other tests and inspections, ensures superior cutting accuracy under actual machine operation.

As a result of this commitment to quality, Republic-Lagun CNC machines perform to standards of precision, accuracy and productivity of machines costing two to three times as much. “That gives you the competitive edge in an era of high quality, low cost manufacturing,” says Bezic, “and that’s what our customers count on us for.”

Precision with Simplicity
Thanks to Republic-Lagun, now machinists can perform normal manual operations with easy-to-use electronic handwheels and with no CNC experience. They can achieve complex machining using an intuitive touch screen system.

The Lagun Liberty TOUCH-TURN lathes maintain the flexibility and ease of use of a conventional lathe while at the same time increasing productivity and precision by using the power of CNC technology to enhance accuracy and reduce work time. TOUCH-TURN lathes can be operated manually like any conventional lathe or through semi-automatic cycles via Fanuc touch screen graphic guidance control.

“The Lagun Liberty TOUCH-TURN lathes represent the fusing of high quality conventional turning with the ability to turn complex parts simply by touching a screen with your finger,” says Bezic. “Sophisticated parts that in the past required the need for a highly skilled operator can now be done readily by those with no previous CNC experience.” Bezic also points out that TOUCH-TURN lathes are priced about the same as a similarly sized conventional lathe equipped with optional accessories required to accomplish the same functions.

Lathe sizes range from 13 by 40 to 26 by 200 inches. Up to 40 different operations can be saved and executed upon demand. There is also capacity for 15 calibrated tools to increase versatility. Accessories and features normal to manual lathes such as taper attachment, tracers, and threading gearbox, are no longer required. Superior finishes are produced through a unique double belt drive system to the Fanuc variable speed main drive and a three-bearing spindle employing precision angular contact ball bearings allowing high spindle speeds. The control incorporates an RS-232 port for communicating with a remote PC or allowing the download of CAD-CAM or existing programs to the TOUCH-TURN control for execution.

Various cycles for OD and ID turning, facing, threading, and grooving that require interpolation of two axes are displayed on the touch screen in the form of icons. No CNC training or knowledge of g-codes is required. Merely touching an icon on the screen will select the cycle desired. In addition, the screen can display operating data including axis position, feed rate, spindle speed, tool selection, and more. In manual mode the screen functions as a two-axis digital readout system.

Continued Quality
Republic-Lagun’s commitment to innovation and quality is demonstrated in its new Liberty TOUCH-TURN product and other new lines it’s recently introduced. The company also recently was awarded the opportunity to produce a lathe for the U.S Coast Guard to produce shaft propellers on boats. “Since we arrived in the U.S. we have always been in this country to serve,” says Bezic. “We are not a company that sells by catalog. It’s all about customization. That is the key. It’s about customization and building quality machines for demanding applications. That is our hallmark.”