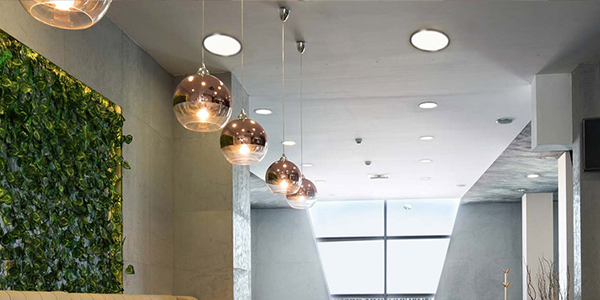 Back in 1904 when the Blitzer family started Lightoiler in New York City, known then as the New York Gas and Appliance Company, never could they have envisioned the impact the company would have on the lighting industry. During its history, Lightolier has lit the way for the Air and Space Museum at the Smithsonian, the Seagram and Citicorp Buildings in New York, and the Museums of Modern Art in both New York City and Boston. It also counts among its clients Nordstrom Department stores, Marriott Hotels and Capital One.

“Everything we see, most of what we do, and much of what we feel is touched by light. Managing the effects of light is what great lighting is all about,” explains Lightolier Director of Marketing Ken Mackenzie. “Lightolier is committed to great lighting – lighting that makes a difference for people and business. To us it’s more than just hardware. Lightolier delivers the magic and impact of lighting. We accomplish this by relying on a unique blend of people, a wealth of expertise and a drive for excellence and innovation”.

Light Years Ahead
Lightolier has an exceptional history of innovation and advancement. Inventors of track lighting, the company also has significant patents on its recessed downlights. Before World War II, Lightolier was primarily a decorative lighting company.

That changed after the war, when it began making advancements in the development of fluorescent luminaires. “Not only has Lightolier been an innovator and made a major contribution to the field of lighting, it has had a major impact on interior architectural design and style. Lightolier has played a major role in setting trends and being part of the evolution of interior architectural design,” says Mackenzie.

Lightolier is the flagship division of the GenLyte Thomas Group, LLC, a Louisville, Ken. corporation – one of the top three lighting companies in North America. Lightolier is dedicated to providing creative solutions for both commercial and residential lighting needs. It employs 1,500 people, all of whom extremely knowledgeable about lighting and have received special training – many having attended the company’s Lightolier University. Its headquarters is located in Fall River, Mass. The company made the move to Fall River in 1994 so its headquarters, which includes the design group, could be closer to its manufacturing facility. A vertically integrated, 255,000-square-foot downlighting reflector facility, it manufactures products there from the ground up. “We don’t source out,” says Mackenzie. “We’re very proud of that. Our products require a high degree of specificity and need to be managed closely. We want to be the one to do that. We don’t want to risk using an outside vendor who may not care as much as we do.” The company also has a 250,000-square-foot plant in Wilmington, Mass., where its fluorescent products are made and an 80,000-square-foot plant in Fontana, Calif., where its line of linear fluorescent systems are created.

Downlights, track lighting and fluorescent products make up the core of Lightolier’s product line. Adding to those core products are four support areas: architectural decorative lighting, including pendants and wall sconces; indirect linear lighting systems, the suspended linear fluorescent products you might see in schools or office buildings, and a full line of lighting controls, emergency and exit lighting.“We have a real do-it-first, do-it-better philosophy driving our design group,” explains Mackenzie. “We will never introduce a ‘me too’ product. We’ll always go one step better than the competition.”

In 1999, Lightolier introduced its Calculite® Evolution® series, a line of very high performance residential downlights for high-end homes. The Calculite Evolution line is a culmination of years of design innovation and offers superior architectural performance combined with the flexibility of installation in either commercial or residential construction.

In 2000, Lightolier introduced ATOM®, an addressable track system. It offers state-of-the-art control and flexibility. ATOM is a simple, yet highly sophisticated lighting control system that allows individual dimming control and light effects of Lytespan® track luminaires on the same circuit. “The ATOM module is attached between the track and the track head. A hand-held remote is used to dim or turn on/off individual track heads. This is a real advancement in the industry that is intuitive and user-friendly. It achieves an almost theatrical type of lighting without the expense,” says Mackenzie.

Lightolier recently introduced its Calculite® Matrix square and rectangular shaped recessed downlights. Spending a year to create the line, the new products provide higher output from a smaller aperture while achieving a fresh, architecturally sensitive appearance. “It’s the ultimate combination of style and performance,” says Mackenzie. “These specification-grade luminaires use energy-efficient, compact fluorescent lamps up to 57 watts and are very competitively priced.”

The Future’s So Bright
Currently working on innovative new products that the company plans to release to coincide with its 100-year anniversary, Lightolier’s success shows no signs of dimming. “Ultimately, Lightolier is about the magic and impact of lighting, not just the hardware. We are selling the effect that the lighting provides – the drama and impact it creates,” explains Mackenzie.

Dedicated to the art and science of lighting, Lightolier does much to spread the word and educate contractors, architects and the general public about its passion. In 1995 the company ran a series of half-hour television shows entitled “Designing with Light” and currently is showing a unique lighting education campaign on its Web site. Its online “Lessons in Lighting” education course offers, free of charge, 22 modules, which provide the fundamentals of light, luminaires, equipment, and lighting design and application. “Thousands of people have taken this course,” says Mackenzie, “college students, industry professionals – the more people we reach the more we spread the word about just how incredible lighting can be.”