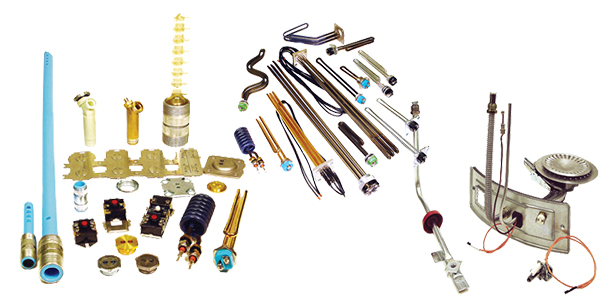 “Synergy” means to share, to develop a union. It means becoming involved in someone else’s life – or another person’s business – to form a partnership that leverages the assets and technologies of both entities and promotes exciting growth.

It is a word that has become the hallmark of APCOM’s business philosophy. Based in Franklin, Tenn. – a state where joining together in the name of volunteerism has long been the motto – APCOM has grown and advanced itself in the parts and components manufacturing field through a steady increase in business fellowships. Being able to bring an equal level of expertise to competitors in the same industry not only takes delicate finesse, but a deft and infinite knowledge of the field and of what customers want.

“The bottom line is that our customers are cost-conscious and competitive,””says Flavious Smith, manager of sales, marketing and business development. “We’re in a commodity market – the water heater business – where prices are competitive across the board. What we do is try to find ways to innovate. We work with manufacturers to build synergy, and we look at consumers to determine what has value in their eyes and build a product that suits their needs.”

Founded in 1969, the company that eventually became known as APCOM originally manufactured water heater parts in a 10,000 square-foot building in Franklin. That facility has expanded five times to its present size of more than 125,000 square feet. At the time it was founded, the company goal was to make 3,000 thermostats a day. Now, APCOM sells more than 3.5 million thermostats a year. In 1973, APCOM began producing heating elements for electric water heaters, and in 1998 sold more than 5 million heating elements. Today, 50 percent of the water heater elements used in the United States are APCOM-produced.

While APCOM sells to companies that compete against each other, it never loses sight of its focus on building a unique trust and synergy with each company on an individual basis. “There really are only five water heater manufacturers in the United States and everyone knows everyone else’s market share and product mix,” Smith comments. “What we try to do is help them differentiate themselves from each other, using our capabilities and manufacturing expertise.”

Growth in a Package
APCOM now is in the process of leveraging its product offerings and services into other markets. “We believe there is growth in packaging parts,” says Smith. “We make the broadest variety of parts of anyone in our industry, and there’s real potential for OEMs and APCOM in this area.” To further promote this goal, APCOM has organized APCOM Inc. SmartParts, the gist of which is to open new markets for APCOM’s parts and systems and to build on the company’s relationships with existing customers.

“We not only look at the part we sell to the manufacturer but how to make the manufacturer money,” Smith explains. “When designing parts, we take into consideration the customer’s labor and assembly costs, trying to add value to the manufacturing process as well. When customers buy one of our parts, they can install it in such a way that it saves them time and money. A lot of our focus is on that aspect of the business.”

APCOM also is poised to introduce one of its product lines into another market. Its PEX (cross-linked polyethylene) nipples used on water heaters are soon to be marketed for use in the oil field industry because of the lining’s chemical resistance. “These nipples will have extended life as the linings will help reduce corrosion, which is a common problem in the oil field,” Smith says.

In addition, he adds, APCOM is evaluating innovations that may change the very products that are a large part of its existing business. “Water heaters traditionally have operated electromechanically,” Smith says. “What we want to do is evaluate more electronic circuitry, which really hasn’t been explored. It could make for more energy efficiency.” APCOM isn’t a company that rushes blindly into short-term opportunities for profit, he adds. “We are flexible and responsive. However, we want to introduce new products with true long-term value.”

A Vision for Global Business
APCOM was founded by Mike Grace who, with foresight and a shrewd business sense, bought the Westinghouse patents for thermostats in 1969. “He saw the potential of this business,” Smith says. APCOM was bought by State Industries several years ago as a way for State to help control its supply chain. “They were concerned about having parts available when they needed them,” Smith explains. “From that point, our product offering expanded greatly.”

Now doing a business of between $35 million and $40 million annually, APCOM sells its parts around the world – particularly to Korea, Western Europe, Canada, Mexico and the Middle East.

Smith adds that APCOM is “gearing for substantial growth. We’ve established a new vision with new opportunities,” he says. “We’re evaluating where and how to grow the company, but our first step is to grow the core business. We want to be the preferred supplier to the water heater manufacturers.”

After proving its innovative success by securing between 12 and 14 patents on its products, APCOM also sees its strength in its ability to work with the manufacturer with a customer focus. “Few suppliers do more than try to market their own products,” Smith maintains. “We take a broader look and try to evaluate how our products fit into a specific system and how this will effect the consumer/end user. We reinvest a lot into R&D; we now have 10 projects that are formally going on with new products either for water heaters or other sectors and other markets.”

But Smith, a recent arrival to APCOM, doesn’t believe the company should rest on its laurels. New challenges and new projects await. “We’ve been challenged with helping to find new opportunities, turning over new rocks that haven’t been turned over before,” he says. “Our mission is to find opportunities for growth using our current innovative expertise. But I’ll tell you what we won’t do. We won’t dilute our core business as we move in new directions. Our goal is to focus on our core business and expand into new areas where there’s synergy.”