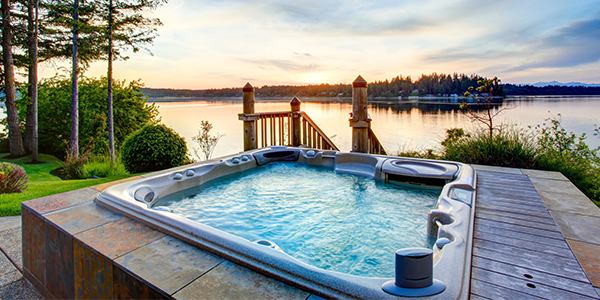 Don and Gary Doebler started selling swimming pools in Buffalo, N.Y. 30 years ago and eventually moved their business to the Southeast, where the swimming season lasts several months longer. The company is now the largest retailer of spas in the U.S. and dominates every market area it occupies. Now with 34 store locations the formula for success remains the same as it always was: hire great people, train them continuously, and offer products that people want at competitive prices.

“When we started selling spas in the 1980s the industry was dominated by startup companies that had little or no financial backing and no quality control processes, but what they did have was a lot of good ideas” says David Doebler, president of Leisure Bay, the parent company of Rec Warehouse. Having difficulty finding reliable suppliers for the growing business, David’s father, Don, and Gary, his uncle, began to manufacture their own line of spas.

The company’s manufacturing capability has been instrumental in its ability to expand and grow. Rec Warehouse takes advantage of the savings it enjoys because it does its own manufacturing and sales, thus avoiding multiple levels and costs of distribution. This also allows the company to respond quickly to market trends. As Doebler puts it, “When we find customers asking for particular features, or when we find an opportunity to add a feature we believe will be popular we simply make the design and manufacturing changes and bring the product to market. We don’t need to convince our supplier that our idea might be valid, then wait for them to work it into their schedule.”

A case in point is Rec Warehouse’s entry into a new manufacturing process for its spas. Traditional spas are made of acrylic material that is vacuum formed to its desired shape. These have been, and continue to be, the mainstay of Rec Warehouse’s spa line as well as for the spa industry as a whole. The company added a new line of spas that has broken the price barrier and opened a new market. “The acrylic vacuform process is pretty expensive and keeps the average price of a spa in the $3,000-plus range. Our new polypropylene spas are made with a rotational mold process which is much less expensive and lets us offer spas with prices starting well under $2,000,” explains Doebler.

The polypropylene spas have opened a new market for the price sensitive shopper. The spas have the same high quality, durability, features, and styles found in acrylic spas but have a different look to their finish. Polypropylene spas now make up about 20 percent of Rec Warehouse’s spa sales, and from all accounts this growth has not had a negative effect on the company’s traditional spa sales. Relates Doebler, “The lower priced spas simply represent a new market for us and for the industry in general. We have been the pioneers in this product category, but we see more manufacturers entering the market this year, and we think the increased competition will only serve to further educate people that there are products available in their price range.”

Pooling its success
The spa market, which didn’t exist when the business was at its infancy in the 1970s, now represents 50 percent of the company’s annual sales volume with aboveground pools making up 25 percent. The remaining 25 percent of the company’s sales comes from its expanded line of leisure products, including billiard tables, lawn and patio furniture, tanning beds, and accessories.

The company grew significantly in the 1990s when it opened 20 stores across the Southeastern United States, from Virginia to Texas. “We are now concentrating on same store sales growth as opposed to opening new locations,” says Doebler. “We are finding about 7 to 8 percent growth each year in our stores, and we will continue to emphasize internal growth for the next several years or so.”

Growth is not just in terms of sales dollars. The addition of product lines such as patio furniture, billiard tables and tanning beds has required significantly more showroom floor space along with corresponding warehouse space. When stores are moved, the concentration is not just on adding space. Each move is calculated to create a better shopping experience for customers.

Rec Warehouse plans to add two or three new locations each year to complement its same store sales growth. The company’s size and financial clout usually makes it the dominant player in any market it enters, but Doebler insists the company’s entry into the local market is good even for the company’s competitors. “We’ve found that if a local retailer sells 250 spas each year before we open, they will still sell 250 spas after we’ve opened, but we will sell something like 500 spas.” He attributes this to the market awareness the company brings with it.

The company, he adds, spends 9 percent of its sales on marketing and advertising, which is twice the industry average and places the company, as well as the products in general, in the minds of customers and generates business for spas and other leisure products locally.

People count
Leisure Bay is in the middle of combining its manufacturing, distribution and corporate offices in Orlando to a single 575,000-square-foot facility in nearby Lake Mary, Fla. This will bring the company’s offices and manufacturing facilities under one roof and add nearly 200,000 square feet that the company will use to expand its rotational spa manufacturing capabilities. “When we moved into our original 113,000-square-foot location in 1985, I couldn’t imagine that we would ever outgrow it. Since then we’ve added two more buildings, and with this move I once again can’t imagine we’ll ever need more space,” Doebler says.

And while Rec Warehouse’s mix of unique product and advertising brings customers into the store, it’s the company’s well-trained and motivated staff that makes sales. Store managers work their way into their positions by starting in warehouse or sales positions. “We hold training sessions twice each week in every store location,” explains Doebler. Training covers product features and store capabilities, and includes role playing exercises and straight product training. The training is intended to give store staff knowledge that comes through to the customer and gives customers confidence that they are making buying decisions with the help of knowledgeable people.

“We know from the sales numbers when a store has especially capable staff,” Doebler says. “It means they are keeping their people up to date on internal and vendor training, as well as customer service best practices.” And as the numbers bear out, Rec Warehouse is an organization that knows how to attract – and maintain – its growing list of customers.