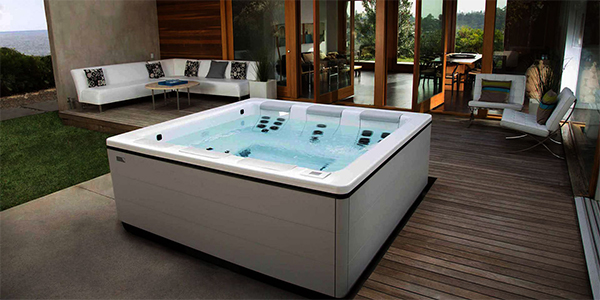 While the spa manufacturing industry was down about 20 percent this year, Bullfrog Spas is riding the wave of a growing streak, up 50 percent last year. The company is expecting to double that growth by the year’s end, says Dave Ludlow, CEO of the Salt Lake City-headquartered company.

Ranked the fourth fastest-growing company of 11,000 eligible businesses in the state of Utah by the governor, Bullfrog Spas, with a new multi-million-dollar facility that is already too small to handle the continuing growth, is expected to grow by threefold. What is the reason behind this impressive and sustained growth?

Bold and Innovative
“We recognized that first you have to have a bold and innovative new technology like ours,” says Ludlow. “You also have to have all the features your competitors offer, but your technology has to be better. You also have to have exceptional people working for you who will give their all, and you need good funding that can fuel the growth of the business so you can buy the right tools you need to build quality products. And in order to manage all of these components, you need an excellent business plan. Once we had all of these elements in place, our growth skyrocketed.”

But it wasn’t always this easy. Back in 1989, Ludlow was an entrepreneur in search of an investor who could help him make a splash in the industry. “The company really started with a manila envelope with a bunch of papers in it containing my ideas for this new technology,” says Ludlow. “After seven years, I finally found an investor to team up with and we put this company together piece by piece. We started with one employee – me – and a manila envelope. Today we employ 130 people and we are growing very quickly.” He adds that Bullfrog Spas received a significant number of honors since it opened its doors for business in 1996 – including Best Manufacturer in Utah producing wholesale durable goods and finalist for the Entrepreneur of the Year award.

Having worked in the family’s pool supply company for years, Ludlow began to notice an inordinate number of spas needing to be repaired because of leakage problems. So he invented a new plumbing technology that could mean the end to leaky spas. “We now have six patents on the mechanics of Bullfrog Spas JetPak™ technology,” Ludlow says.

Consumers can choose from among 15 JetPaks, targeting specific areas of the body, including the lateral muscles, the lower back, the spinal centerline, and the neck and shoulders. The jetted seatbacks (or JetPaks) are modular, therefore each user of a spa can have what amounts to a custom-designed seat specifically designed for therapeutic needs and height, as well as jetting preferences. “The entire seatback is interchangeable to accommodate all of these choices to fit your body type and the contour of your back,” Ludlow says.

The spas are available in a wide range of massage options as well. “One is a boot-like mechanism with an accessory that rubs the back deep into the tissue without water spraying on it,” explains Ludlow. “Other jets spray water, or rotate-spray, or pulsate or tingle like a showerhead does. No other spa manufacturer can give you the range of choices we offer because their jets are pre-installed and are not custom-designed for therapeutic needs.”

So, based on the combinations of JetPaks, colors, control equipment, and pumps, there are about three million combinations possible for a spa design, Ludlow says. “Then, when we come out with new jetting designs, you can easily upgrade your spa to a new spa just by buying a new JetPak,” Ludlow says, adding that although each spa is custom-designed to fit the users, Bullfrog Spas can still manufacture its products efficiently.

Innovative Plumbing Design
“The reason I invented this technology was because I was continually repairing spas that leaked – even very good brands,” Ludlow says. “But those spas designed their plumbing on the back side of the shell of the spa and the plumbing fed water in to the jets.”

Bullfrog Spas are designed so most plumbing is contained within the water within the spa. “So if you have a leak, it leaks into the water and not out of the spa,” Ludlow says. “JetPaks are warranted against leakage for the life of the buyer of the spa. No one else in the industry offers a warranty like this.”

JetPaks snap into jet pods, receptacles filled with the water within the spa itself. Each JetPak has jets in its front and the plumbing is contained on the backside of the JetPak. Up to 90 percent of the piping and pipe fittings found in other companies’ spas are eliminated. The design of Bullfrog Spas also greatly reduces the number of pipe connectors necessary in the plumbing system, so more pressure is available to each of the JetPaks.

The company markets its spas through a network of 130 outlets around the country, including pool and spa stores and retailers. Bullfrog Spas also licenses its JetPak technology to a factory in Brussels (handling the European market) and Melbourne, Australia. “They license our technology from us because we have patents on it,” explains Ludlow. “We sell them the proprietary components we manufacture here – which are not available in their markets – and then they buy the remaining components in their areas and they assemble Bullfrog Spas in their factories. They pay us a royalty fee for the technology they use to produce each Bullfrog Spa.”

A new market is evolving and Bullfrog Spas is keenly interested in developing this new area. “We are beginning to market to a more price-sensitive market and we’ve introduced our Tadpole series of products,” Ludlow says. “We are hitting a lower price point here in order to service a market where people are more price-conscious about investing in a spa.” The Tadpole series incorporates a limited amount of the Bullfrog Spas technology. “We have about half the seats available with JetPaks and the rest are similar to our competitors’ in that they utilize fixed seating without the interchangeable JetPaks,” explains Ludlow. “In general, there are fewer features across the board and the computer controls are reduced somewhat – but the Bullfrog Spas quality is still there.”

The company that was founded on some dreams in an envelope now operates in a building that will soon occupy 100,000 square feet – oceans away from the 10,000-square-foot factory it started six years ago. What lies ahead for the company? “We would like to be known as the company that stepped out of the box and did something so drastically different from what has been done before,” Ludlow says. “This positions us as unique and different in the industry. However, a role we would like to play in our industry is to be a good competitor doing what we do well. We are not out to degrade any of our competitors, but we want to maintain friendships with all our competitors and work with them as a team to grow our industry and to make spas more popular for all of us so we can all do well in this industry.”