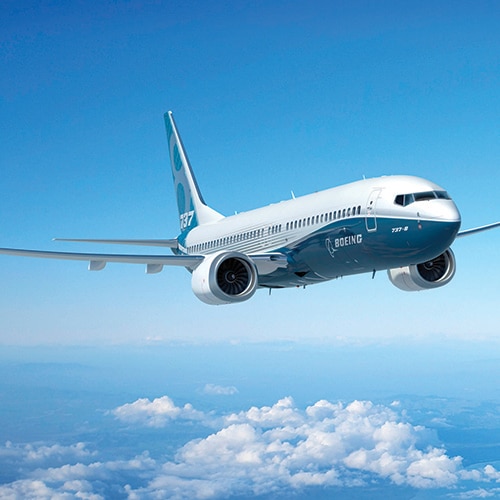 The shape of the plane might remain the same but don’t let that fool you.

Boeing Commercial Airplanes is continuously innovating its popular line of 737s, pushing the envelope on the definition of “next generation” and providing comfort, sophistication and high-tech features in a line of products that has set the standard in the aviation industry.

It’s a method and philosophy of continuous improvement that has been integral to the company’s success since it was founded more than 100 years ago by William Edward Boeing: Take the idea and turn it into something.

Boeing’s legendary single-aisle airplanes are manufactured in Renton and Everett, Wash., and Charleston, S.C. In particular, Renton is home to many of the company’s most renowned products, including the 707, 727, 737 and 757. Today, employees at the 278-acre site, which encompasses 4.3 million square feet (380,902 square meters) of building space, produce Next-
Generation 737 airplanes.

The Next-Generation 737 family, described as the newest, most-advanced jetliner in its class, entered service in 1998 and is offered in four sizes. The family includes the 737-600, -700, -800 and -900ER (extended range). Other models include the 737-700C convertible freighter, the BBJ, and the P-8, the world’s most advanced long-range maritime patrol and reconnaissance aircraft being built for the U.S. and Indian navies.

The next gem of this product line is The 737 MAX, which is still in the design stage and represents a new family of single-aisle airplanes.

Taking It To The MAX
Boeing’s 737 MAX 7, 737 MAX 8 and 737 MAX 9 will take the Next-Generation 737’s popularity and reliability to new heights, while delivering customers unsurpassed fuel efficiency in the single-aisle market.

What separates the airplane apart in the market? Many things. For one, the 737 MAX will deliver big savings in fuel that airlines require for the future. The new-engine variant, powered by CFM International LEAP-1B engines, reduces fuel burn and CO2 emissions by an additional 13 percent over today’s most fuel-efficient single-aisle airplanes. Recent design updates, including Boeing’s Advanced Technology winglet, will result in less drag and further optimize the 737 MAX performance especially on longer-range missions.

When compared to a fleet of 100 of today’s most fuel-efficient airplanes, this new model will emit 305,000 fewer tons of CO2 and save more than 200 million pounds of fuel per year, which translates into more than $100 million in cost savings. The 737 MAX 8’s fuel burn is expected to be 8 percent, per-seat, lower than the future competition.

Said Kell, on-time performance is the major positive influence on passengers’ perception of their experience on short flights and saves operators maintenance, flight and crew costs.

Rev Your Engines
A major advantage in the 737 MAX is the new LEAP-1B engine from CFM International.

The partnership allows the 737 MAX to incorporate the latest quiet engine technology to reduce the operational noise footprint of the airplane by 40 percent. Emissions will be approximately 50 percent below the International Civil Aviation Organization’s (ICAO) Committee on Aviation Environmental Protection (CAEP)/6 limits for nitrogen oxides (NOx).

The Sky’s The Limit
Outside of technical superiority, Boeing’s 737 MAX is built with passengers in mind; otherwise, what’s the point? To have passengers satisfied with your aircraft is the reason why you build it in the first place and for Boeing, passenger praise has come on many levels since the invention of the Boeing Sky Interior, which is standard on the 737 MAX.

Drawing from years of research inspired by the travel experience, the 737 Boeing Sky Interior features new, modern-sculpted sidewalls and appealing features that draw passenger eyes to the airplane’s windows, giving passengers a greater connection to the flying experience.

“When we developed the 737 there were studies done of what makes people comfortable while flying, and an important part is making them feel less cramped,” said Kell. This brought Boeing to engineer pivot shelf bins; rather than having the closeness of overhead storage bins make you feel even more claustrophobic, the new pivot bins tilt up and away into the crown of the airplane.

Another major interior breakthrough was in tinting the ceiling blue. “The human eye doesn’t focus on the color blue,” he explained. “By putting blue on the ceiling it makes it feel higher, as though there is more open space.”

Boeing even redesigned reading-light switches so passengers can find them more easily and avoid accidentally pressing the flight-attendant call button. Speakers integrated into each row’s passenger-service unit improve sound and clarity of public address operations, while the new air grill is tamper-proof and improves operational security.

All In The Family
The 737 MAX continues Boeing’s strategy to build airplanes in a family of sizes, offering customers the size of airplane to fit their market needs. But before the MAX, there is Boeing’s current family of Next-Generation 737 airplanes which is offered in four sizes, ranging from 110 to 220 seats.

Since the introduction of the Next-Generation 737 Boeing has continued to improve the airplane. Enhancements include new-technology Blended Winglets, which boost performance. The 8-foot (2.4-m)-long wingtip extensions enhance range, fuel efficiency and take-off performance while lowering carbon emissions, engine maintenance costs and noise.

A close-up of features on the Next-Generation 737 models also shows:

In addition, the Next-Generation 737 program has continued to evaluate and incorporate value-added technologies and design innovations to improve performance and capabilities. Recent offerings include short-field performance enhancements to increase payload capacity and reduce takeoff and landing field length; and carbon brakes to reduce weight for improved airplane operating economics.

Other changes include leading-edge display and flight-management software that allows the airplane to fly the most restricted navigation routes through use of industry leading Required Navigation Performance. The Next-Generation 737 is the first commercial jet airplane certified for Ground Positioning System landings, which use satellite technology to make landings more efficient, accurate, and environmentally friendly.

Additionally, the Next-Generation 737 flight deck is equipped with technologies such as Vertical Situation Display, which shows the current and predicted flight path of the airplane and indicates potential conflicts with terrain; and Head-Up Display, which provides pilots with “eye-level” flight and safety information. These optional features are examples of how the Next-Generation 737 is designed to reduce flight delays, enhance safety and flight-crew efficiency.

On the MAX, Boeing will take flight deck technology to a new level with new large screen displays with enhanced graphic capabilities. The 737 MAX will maintain operation commonality with the Next-Generation 737 on entry into service, but the new displays will allow Boeing to accommodate the flight deck needs of the future.

The Plane That’s Everywhere
Such innovation is the reason why Boeing’s 737s comprise many fleets worldwide, on every continent and in every major market, and have been praised by industry experts and officials for their ingenuity and creativity in design and function.

In India, Boeing, SpiceJet has ordered 30 Next-Generation 737-800s with its CEO, Neil Mills saying, “We are extremely satisfied with the Next-Generation 737 — an airplane that is reliable, allows for greater efficiency in maintenance and supports the business plan for low-cost carriers.

Airlines in both North and South America are also quick to applaud Boeing’s Next-
Generation innovation.

“The 737-900ER is the perfect airplane to replace older, less efficient aircraft because it has one of the lowest fuel burns per mile in our narrow body fleet, and provides a superior passenger experience,” said Ron Baur, vice president of Fleet at United. “With the new Boeing Sky Interior, our customers will appreciate the modern and spacious design which includes larger overhead bins that retract into the ceiling.”

“GOL was one of the first in the world to order the Boeing Sky Interior and now we are the first airline in South America to operate with this state-of-the art technology and unmatched passenger experience,” said Claudia Pagnano, vice president of Commercial and Marketing for GOL. “We are excited to be able to bring this unique experience to our valued customers and they will absolutely know they are flying GOL as soon when they step inside one of our cutting-edge, cost effective airplanes with this new interior.”

It is so popular, in fact, that the 737 forms more than one third of Boeing’s delivered in-service airplanes and 25 percent of the world’s commercial jet transport fleet.

So stand outside and look up. That’s no bird in the sky. It’s a Boeing 737. Somewhere in the world, one takes off or lands every 2.3 seconds.