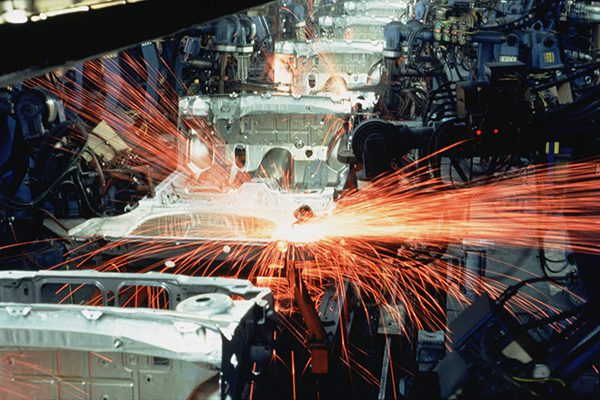 One of my favorite sets of U.S. government statistics came out this morning –“Productivity and costs by industry: manufacturing and mining industries.” However boring it sounds, it’s useful because it sheds lots of light on which specific sectors within domestic American manufacturing should be seen as winners and losers or “industries of the future” (presumably the productivity stars) versus smokestack and other allegedly outmoded types of activity (the productivity laggards).

In addition (and this will be covered in an upcoming post), these detailed figures on manufacturing labor productivity (the narrowest of the two types of productivity tracked by the feds, but the measure that comes out on the timeliest basis) go far toward showing whether job loss in manufacturing lately has mainly been due to trade and globalization, or to industry’s improved efficiency. This debate of course has long been near or at the heart of the broader, decades-long debate about the effectiveness of American trade policies.

First let’s look at the overall numbers – which are anything but flattering to manufacturing. According to the Bureau of Labor Statistics (which compiles these data), in 2018, when manufacturing’s labor productivity as a whole rose by 0.80 percent, it fell in absolute terms in 67 out of the 86 sectors examined. That was a worse performance than in 2017. Even though that year, overall manufacturing labor productivity improved by slightly less (0.70 percent), it decreased in 54 of those 86 industries.

Broken down by super-categories, in 2018, in the 51 durable goods industries followed by the Bureau, labor productivity declined in 41. In the non-durables super-sector, labor productivity dropped in 26 of 35 sectors studied. For 2017, the comparable numbers were 34 of 51 and 20 of 35, respectively.

Even more interesting, in my view, are the results for these 86 individual industries. First, the ten best labor productivity performers in 2018 and their annual percentage gains. As you’ll see, the list that isn’t exactly dominated by advanced technology, at least according to the most popular definitions and portrayals. (FYI, “magnetic media” are a fancy name for products like audio tapes and compact disks – which this aging baby boomer is constantly told are hopelessly outdated.)

And here’s a list of the 2018’s ten worst labor productivity performers. Most appear to be “lower tech.” But look at aerospace at Number Five! That’s the economy’s biggest trade surplus winner! The huge automotive sector had a terrible labor productivity year, too.

Finally, here are some labor productivity numbers for some manufacturing sectors of special interest. Pharmaceuticals seems a logical choice to kick it off, given the role that healthcare and drug-pricing issues have been playing lately in national policy and political debates. Its 2018 labor productivity fall-off indicates that if the industry improved its efficiency, it wouldn’t need such sky-high prices for many of its products to achieve what it considers adequate profitability.

The next three sectors have been prominent in trade policy controversies. The two metals sectors faltered on the labor productivity front last year. (In 2017, both produced considerably better results). But if you look at their labor compensation costs (also provided in today’s productivity release), you’ll see that they’ve at least shared many of the benefits of the protective tariffs they’ve received with their workforces.

Such compensation rose by 7.2 percent for iron and steel-makers, and five percent for the aluminum industry. Both increases handily beat the 1.70 percent average for all manufacturing, and the 1.40 percent for durable goods production.

Finally, let’s examine the semiconductor sector, since it’s commonly described as a main “building block” of the entire high tech portion of the American economy. In 2018, its labor productivity fell (by 1.20 percent) – and for the third straight year. But here, labor compensation was way up (by 5.60 percent).

Intellectually honest economists will admit that measuring productivity is one of their most challenging tasks. But it’s also inescapable.  And the new detailed manufacturing labor productivity data make clear that identifying the nation’s most and least valuable and promising manufacturing industries remains just as challenging.