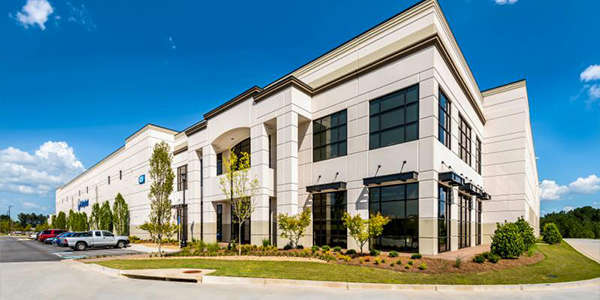 When multi-national corporations from all points of the globe begin planning their multi-million dollar projects in the U.S. the details can be overwhelming. Codes, regulations, permitting processes, design criteria, language and customs are all factors that these companies must overcome – in a cost effective and time efficient manner.

To pull off such a feat would require a “Master Builder” who could orchestrate different country requirements, communicate in numerous languages, coordinating a complex array of contractors and sub-contractors all while avoiding cost overruns and schedule delays. That’s why many of the world’s giant name brand companies, such as Fuji, Cardinal Health, Hitachi, GE, Coca-Cola, Pfizer, Mazda and General Motors, have turned to another giant: Kajima, the American arm of Japan’s leading contractor and the fourth largest in the world.

You may not be familiar with the Kajima name, but there’s a good chance you’ve seen the company’s projects; for example: The Fuji Photographic Paper Plant, located in Greenville, S.C. covers a sprawling 300-acre site with close to 270,000 square feet of manufacturing area and is Fuji’s largest single manufacturing location. Mazda’s 2.7-million-square-foot turnkey assembly plant in Flat Rock, Mich. was designed and constructed by Kajima in a blistering 28-month schedule. The company also worked on the new global headquarters for CNBC in North Jersey. One of the more complex projects Kajima has undertaken was the design and construction of Hitachi’s state-of-the-art semi-conductor plant in Irving, Texas. The 32-bit RISC processor fabrication plant totals in excess of 400,000 square feet with 70,000 square feet of clean room.

These projects represent some of Kajima’s crowning achievements. But they also are just some of its many accomplishments in a little more than four decades since the company arrived in North America. Kajima’s successful projects literally span the United States, from a skyscraper towering over the Port of Los Angeles to a popular Florida aquarium. Working quietly and sometimes behind the scenes Kajima has completed over 5,000 projects with a combined estimated total revenue of $7.5 billion since it began operation in the U.S. for these corporate goliaths.

Becoming a specialist
While its large projects tend to get the most attention, Angelo Eguizabal, the director of national marketing for Kajima, said that the unit’s North American strategy for the 21st century is now to develop an increasing focus upon niche industries, especially those with highly specialized and complicated needs.

“We do very well with complex industries that have a process to their products like pharmaceutical and healthcare, where attention and detail and high quality is a key factor,” Eguizabal said. “That’s really where we shine. It seems the more complex the project; the better we do – that’s where we want to go.”

In addition to healthcare and pharmaceutical, Eguizabal mentioned manufacturing, food processing and telecom as the areas where Kajima is increasingly focused. “In those kinds of industries, the downside of not getting it right is a lot costlier than the construction costs. You make a bad pill, bad hot dog, or you provide somebody improper health care … my gosh, the lawsuits and damage that come from that far exceeds the cost of building it.”

In just a relatively short period of time here, Kajima and its business groups have been through a number of changes and different incarnations. The unit was first launched in 1961, at a time when many growing Japanese companies were looking to build plants in the United States and wanted to work with a contractor who already knew their business models.

With over 160 years of experience and over 13,000 employees around the world, Kajima Corporation is a global leader in the design, construction and real estate development industries. Traded publicly on the Tokyo and London exchanges, Kajima has reported roughly $16 billion in annual revenues.

Kajima’s rich and remarkable history begins in Japan in 1840 when the Shogun was still ruling, and a master carpenter named Iwakichi Kajima opened a carpentry shop in downtown Edo, now known as Tokyo. Ironically, the fledgling company set the stage for its long and rich history with the United States by working to build new offices for American trading companies after Admiral Richard Perry arrived on the Pacific atoll in 1858.

A leader in telecom
After Kajima’s modern arrival to do business here in the United States, the company thrived from the wave of Japanese investment that took place here during the 1980s.

“A lot of it had to do with our Japanese origins – they were comfortable with us and the way we’re doing business here,” Eguizabal said. “In the beginning of the 1990s, that work shifted to the telecom industry. For most of the 1990s, we were very much a telecom leader, designing and building telecom facilities for Quest, Sprint – all the major firms out there.”

Kajima is a national company with five operations offices in New Jersey, Atlanta, Chicago, Dallas and Los Angeles. Eguizabal said the unit is probably going to produce in the range of $300 to $400 million in construction revenue this fiscal year. The group has about 230-250 employees.

The company executive said there are several key factors that give Kajima a competitive edge here.

“We really do focus on getting to know the client and providing solutions,” Eguizabal said. “And I don’t know if it’s the Japanese origin or ownership but we really have a culture of service here – looking at servicing the client beyond what competitors do.”

Eguizabal cited two other reasons: “We’re national,” he explained. “We really can build your plant, or build your facilities anywhere in the country. With those strategically placed offices, we can have a national span with local resources. And we have some very deep resources that we can call upon when we need to, such as when a client needs bonding capacity.”

But the main strength of Kajima, both here in America and at the parent company, Set featured imageis ability to change with the times, from a feudal shogunate to the 21st century high-tech economy.